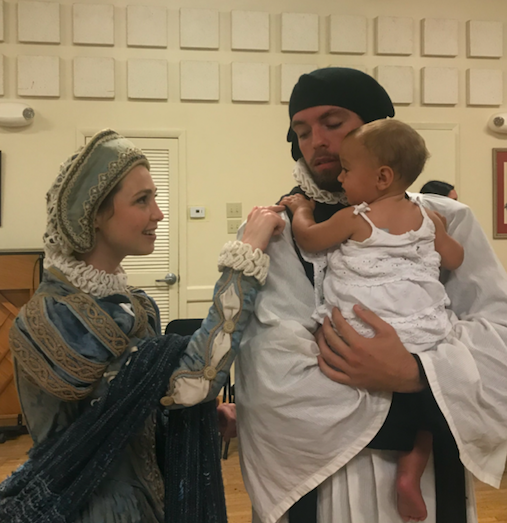 Madison Vice as Eleanor Dare smiles at the baby, Evalynn Beatrice Witter as Virginia Dare, who’s being held by Matt Gabbard as Father Martin. The Lost Colony will feature six babies in the role of the first English child in the New World during special performances. Contributed photo

The birth of the first English child in the New World has not been lost to time on Roanoke Island. Each year Manteo town offices close, and celebrations are held, to mark the event.

This year on Saturday, the anniversary of Virginia Dare’s birth special events are planned at the Fort Raleigh National Historic Site, The Lost Colony outdoor drama and the Elizabethan Gardens.

Virginia Dare was born on Aug. 18,1587 on Roanoke Island to Ananias and Eleanor Dare, who were part of a group of 116 men and women attempting to establish England’s first settlement in North America on what is now the North Carolina coast. By 1590 the entire settlement, including Virginia and her parents, disappeared without a trace. The mystery is known as the Lost Colony.

Activities for Virginia Dare Faire are free of charge and open to children of all ages. Events will vary from field games to creating clay pots with actors dressed as Native Americans. Carnival-like activities including coloring, face painting, and bubble stations will be open all morning. Field games like Sir Walter’s potato toss, hula-hoop activities, sack races and archery stations are also a small sampling of the day’s happenings. Other entertainment will include street dancers, royal etiquette lessons, photo opportunities with Queen Elizabeth, a fight demonstration, and special appearances from characters of The Lost Colony.

Join park rangers to learn about the design and function of military installations, like the earthen works at Fort Raleigh, by constructing a fortification using moon sand. Participants will learn about the 1585 soldiers, fortifications, the 1952 reconstruction, and the artifacts uncovered at the site. Stop by the National Park Service water color station where you will be able to create your own water color painting and learn about the explorer, scientist, and artist John White. John White was among the first English men to document the Carolina Algonquin people, landscape, flora and fauna found in the New World.

At noon, there will be birthday cake, provided by Harris Teeter.

The evening’s performance of The Lost Colony features local babies in the role of Virginia Dare.

More information is available on the website at thelostcolony.org or by calling the box office at 252-473-6000.