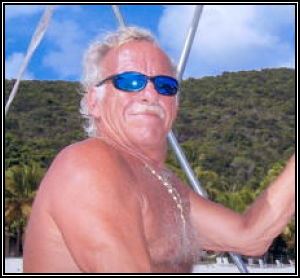 James R. Wood, “Captain Jim,” passed away on Aug. 9, 2018. Jim was preceded in death by his loving parents, Hugh and Marion Wood, and brother, Randy. Jim grew up in Newport News working at Dow Badische, Vepco, and Phillip Morris in Richmond, Virginia.

Jim’s love of the Outer Banks is where he spent his summers as a lifeguard at Avalon Pier and later enjoying his retirement with the many friends he made there and at Awful Arthur’s through the years.

Jim’s love of the water throughout his life involved boating, waterskiing, and spear fishing in the Florida Keys with the Sand Sharks Skin Diving Club and his many trips to the Virgin Islands where he captained boats with his friends.

Jim is survived by two brothers, David and Barney Wood, of Massachusetts; one niece; four nephews; his girlfriend, Jenny Kirchmier who was with him until the end, along with Sandra and Bucko Fairfield, their daughter, Tara Fairfield, and their grandchildren, Aryn and Cole Porter who fondly referred to him as “Uncle Jim.”

A big thanks to the doctors, nurses, hospice workers and caregivers at Sentara Albemarle Medical Center Elizabeth City.

A memorial service will be held at Awful Arthur’s Oyster Bar, Kill Devil Hills, at a later date. Condolences may be sent to the family at www.TwifordFH.com. In lieu of flowers, you may make a donation to your favorite charity.