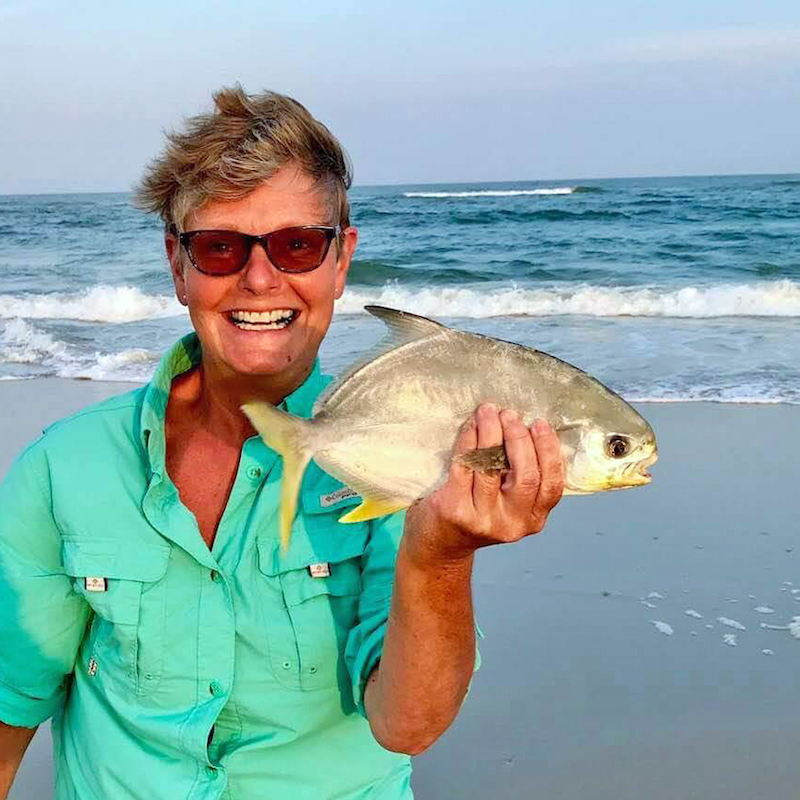 Photo courtesy Tradewinds Tackle. Candice Cobb with a nice 15.5 -- inch pompano she caught on shrimp and released at South Point on Ocracoke Island the end of last week.

With children across the county, state and country back in school now, life on the Outer Banks slows down just a bit this week but it all goes back to full tilt this Labor Day Weekend. After that, however, anglers relish fall fishing when things are less rushed.

Down at Hatteras Harbor Marina, Jennifer Scarborough said she expects life to slow down but thinks fishing will pick up soon.

“Last week fishing was a little slower with good wahoo, a few dolphin and black and yellowfin tuna,” she said Monday morning. “They’re also getting tilefish, snapper and grouper.”

Inshore boats are getting “reds, Spanish and blues,” Scarborough added.

As for the crowds around the island, she said things do indeed slow down this month. They see more groups of people who don’t have kids and have also been waiting for things to calm down traffic-wise and such.

At the Oregon Inlet Fishing Center, George Cecil, mate on the Sea Breeze, said tuna fishing had slowed down and sharks were hitting the fish when they did catch one.

He was hanging out at Jennette’s Pier Sunday when anglers were catching a lot of Spanish mackerel all day. A large cobia was spotted under the pin rig live baits but disappeared quickly. A school of king mackerel were spotted at one point too.

They’ve been getting a great mix of cobia, kings, pompano and Spanish in the past week.

Bluefish were also biting early and there was a ton of bait in the water including baby hound fish, ballyhoo, banded rudderfish and more. Ron Robbins of Manteo took home a mix of Spanish and blue crabs for dinner.

Jennette’s Pier plans to hold its annual Jim Mulford Memorial Red Drum Tournament Saturday, Sept. 29 from 7 a.m. to 1 p.m. with lines in the water 8 a.m. to noon. Cost $20 for adults; $10 for children age 12 and under. Prizes will be awarded in two red drum categories: Puppy Drum (slot 18 to 27 inches) and Red Drum 27 inches or longer.

Additional awards will be available for the longest fish in a variety of other categories including black drum, bluefish, croaker, flounder, pompano, sea mullet and more.

Register online today or pay at the counter the day of the event. A short awards ceremony will follow the fishing around 12:30 p.m. Door prizes and good times.