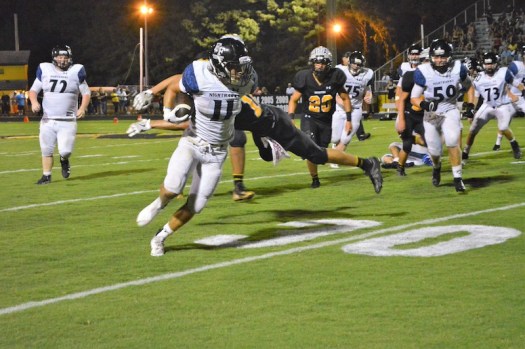 Senior Nighthawks running back Noah Nurney turns the corner and heads for the end zone for a touchdown in the first quarter of the Marlin Bowl. First Flight won it 41 to 21. PHOTO BY DARYL LAW 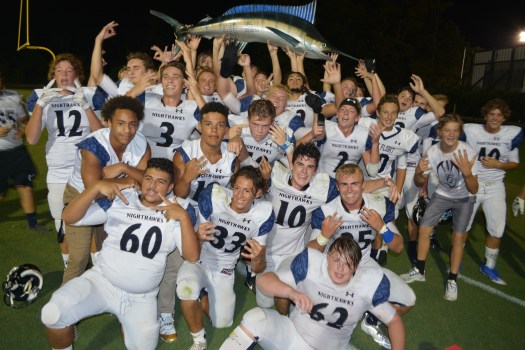 ‘It’s a six-peat!’ The First Flight players, cheerleaders and fans were thrilled to up end Manteo for the sixth straight time in last Friday’s Marlin Bowl. PHOTO BY DARYL LAW 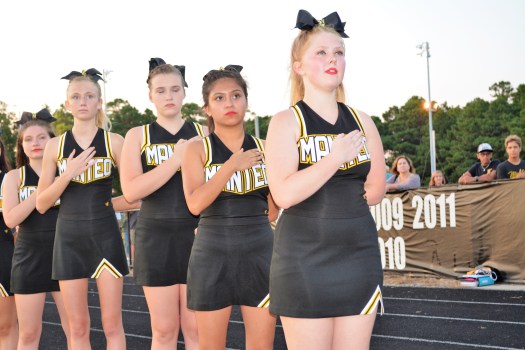 Manteo Redskins cheerleaders, from right to left, are seniors Sophia Farrow and Leslie Estrada along with juniors Avery Creef, Cora Pate and Kiersten Frazee. These girls were loud and proud all night long. PHOTO BY DARYL LAW 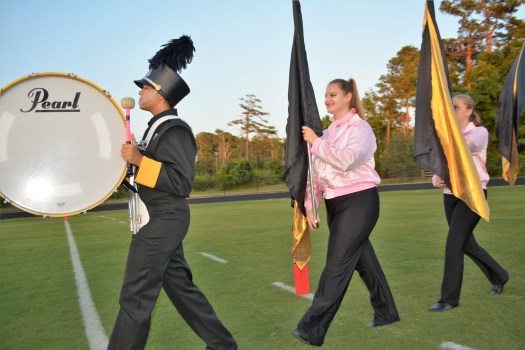 First Flight made the most of several explosive special teams plays to trounce Manteo 41 to 21 in the cross-county rivalry football classic Marlin Bowl game Thursday night. It was the sixth time in a row the Nighthawks took home the coveted trophy.

Senior running backs Noah Nurney (No. 11) and Parker Sylvia (No. 25) each had numerous long plays and scored touchdowns. After the game, while the players, cheerleaders and fans celebrated with their marlin mount, ‘Hawks coach Jim Prince quickly reviewed what the game meant to his guys.

Apparently, the Nighthawks did want this one badly and they pushed hard for the victory from the opening whistle. Midway through the first quarter, a big time punt return set up a Nurney scamper to the end zone.

“Great job, great job,” Prince said to Nurney on the sidelines after the play. The Nighthawks were up 6 points to nothing at the end of the first quarter. Early in the second quarter, Manteo had the ‘Hawks pinned down on their own three-yard line.

On first and 10, quarterback McCoy Davenport (No. 3) connected with wide receiver Ethan Driver (No. 1) for a huge time, wire to wire, 97-yard pass play right along the First Flight bench for a touchdown to make it 13-0 with the point after. Prince later said it was the longest pass play in school history.

But Manteo didn’t flinch. Instead, they sent running back Claveon Rice (No. 4) for a 65-yard long touchdown scamper right in front of the home team’s bench for a score of their own to make it 13 to 7.

Right when it looked like the Redskins might make the Marlin theirs, First Flight’s Sylvia took off on a second and 15 run play for a 75-yard plus touchdown run pushing the score to 20-7.

But again, the Redskins fought back. Rice had another huge run for around 60 yards and then junior Caleb Barker (No. 44) carried it into the end zone to put Manteo just one score back, 20-13.

In the trenches, First Flight’s Jake Pendergrass (No. 77) and Connor Readman (No. 88) were clogging up the middle and pressuring Manteo’s quarterback Bryson Sawyer (No. 7) throughout the game. For the ‘Skins, sophomore defensive end Dylan Sharp (No. 55) had some big plays and he recovered a ‘Hawks fumble.

A delightful presentation by the Manteo band included songs Summer Dreams and Greased Lightning with a “souped-up” performance by the color guard. Thousands of fans filled the stands, waited in line at concessions and lined the fences all the way around the field.

The first play of the second half set the pace for the remainder of the game, however, when Nurney returned the kickoff all the way to the house. The huge momentum swing set up First Flight for an eventual 41 to 31 final. Davenport finished off a long Sylvia rush in the third and Sylvia eventually scored again.

Coach Prince was pleased with his quarterback, Davenport, as well as with Nurney and Sylvia.

“I think McCoy is doing a great job of controlling the game, and getting the ball [to our receivers], coach Prince said. “Like our drive where we went up by two touchdowns, he hit that big third down and long pass. So that was critical.”

Big plays were what made the game, and Nurney and Sylvia had several each.

With Manteo’s mantra of “Find A Way,” they’re sure to bounce back and be ready for this Friday’s 7 p.m. game against Bear Grass. It will also feature the induction of five athletes and one coach into the Manteo Hall of Fame, reports Athletic Director, Alfie Wheeler.

First Flight will head to the big city for a non-conference game against Norfolk (Va.) Academy also Sept. 7 at 7 p.m. 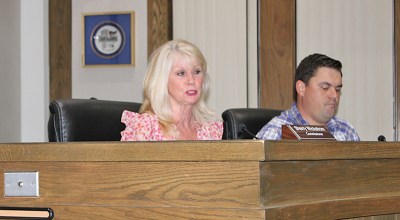