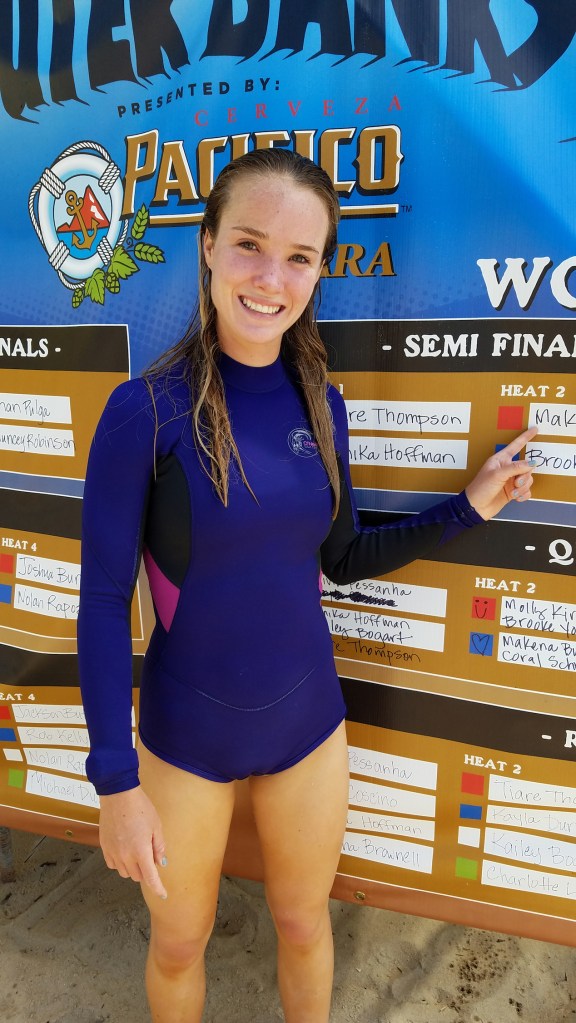 Surfer Makena Burke placed first in the women’s division of the WRV OBX Pro World Surf League qualifying event at Jennette’s Pier over the weekend. It was the first time in more than a decade women also competed in the event. Olivia Pessanha placed fifth. Courtesy photos

The WRV Outer Banks Pro pres by Pacifico title stays with the Brazilians for another year after Renan Peres Pulga’s perfect event showing over the weekend Jennette’s Pier in Nags Head.

The event marked a long-awaited breakthrough win for Pulga and the outpouring of emotion from the 20-year-old showed what it meant to him after taking down one of the event’s most in-form surfers, American Chauncey Robinson, in the final. The Sao Paulo, Brazil, native continued his impeccable run despite a paddle block to begin the final, but recovered brilliantly and posted a 7.17 (out of a possible 10). Robinson tried to respond, only garnering a 5.17, before Pulga went to work on his vicious forehand attack one more time for an excellent 8.50 to put the Floridian in a combination situation he was unable to recover from — keeping the WRV Outer Banks Pro title in Brazil for another year.

“It’s just a dream come true and it’s the best day of my life, I still can’t believe it right now,” Pulga said.

Pulga battled through an all-Brazilian Semifinal affair against QS veteran Alan Donato after eliminating top QS threat in attendance Cam Richards in a big quarterfinal, after already having won his Round 4 heat. Now, the Brazilian prepares for more events with his focus ready and has the confidence to back it up after putting together a flawless run in Outer Banks.

The Floridian nearly made it atop the podium after his runner-up in Barbados last season, but fell short to Pulga.

The Melbourne Beach, Florida, native’s finals day run earned him a second QS finals appearance, but just fell shy of the top podium once more. Robinson’s newly found mindset continued to push him forward and cap off a great East Coast leg run. It was no easy task for the 20-year-old getting to the final, overcoming the explosive surfing of Nolan Rapoza in the semifinals after dealing with former WRV Outer Banks Pro Champion Michael Dunphy in the quarters following his Round 4 win and nearly making it a perfect event himself.

American Nolan Rapoza had the crowd in awe with soaring airs throughout the event on the way to a semifinal finish.

The Long Beach, California, native fell just shy of a finals appearance once more after matching his best result in 2018 with a semifinal finish. Rapoza and Josh Burke have a lot of respect for each other in the water and both gave their all in a tight quarterfinal bout that swung Rapoza’s way after numerous aerial attempts accompanied by his power turns. It was one of the slower heats of the day before a battle between Rapoza and eventually runner-up Robinson ensued in the semifinals, this time leaving Rapoza on the outside looking in. But, the 20-year-old remains positive and is doing some of his best surfing since becoming North America Pro Junior Champion.

“That last heat with Chauncey I thought I could’ve got it, but that’s how it goes and I’m happy with that result,” Rapoza said.