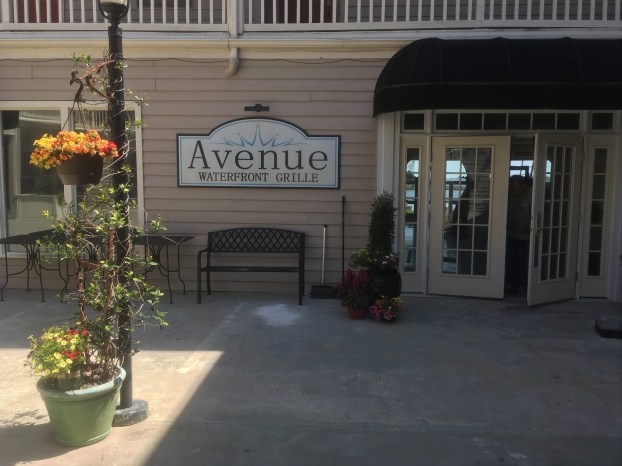 A new year has begun at Avenue Waterfront Grille. The Manteo eatery that features an eclectic menu using fresh, local ingredients has finally reopened after a broken pipe flooded the restaurant in January forcing it to close.

Just prior to the restaurant’s Sept. 3 opening, owners Maria and Thomas Williamson said they were excited and a little nervous. The former staff was back, the menu was in place and final preparations and decorating touch ups were being completed.

“As we were working to prepare the menu, the aroma of the kitchen hit me,” said Maria “and I got choked up.” Their dream was back in business.

Thomas, the restaurant’s head chef began his restaurant career as a teenager. He learned his craft as a chef in one of Charlotte’s successful restaurants and honed his skills in the growing culinary restaurant scene in the North Carolina mountains. Maria, his wife and partner, beams when she talks about his passion for food, his insistence on only the freshest ingredients and his constantly evolving menu.

In 2011 with three kids in tow, the Williamsons packed their belongings and headed to the Outer Banks, Thomas’ family’s ancestral home. After a year as chef at the restaurant they now own, the couple had a chance to purchase the business. The dream of bringing their philosophy of good, healthy food with a spirit of community commitment had begun. After six seasons of hard work and steady growth they couldn’t image that the dream would almost be washed away.

It was a cold night in January when they received a call from a neighbor at the Waterfront Shops where the restaurant is located; a sprinkler system pipe in the attic of the condo units above the restaurant, had burst. Maria remembers it was freezing out with snow on the ground as they rushed to the restaurant.

“When we opened the door, water was shooting out of the light sockets and sheets of water were pouring from the ceiling.” Maria said. “It took a couple of days to process the devastation, it was heartbreaking.”

There were tough months ahead for the couple. An initial plan to open by spring didn’t work out. The renovation was at a standstill for four months while the couple looked for a new contractor. Thomas took part-time work and they dipped into savings but perhaps the hardest part was telling the staff they would need to find other jobs.

Sometimes they had to convince themselves to stay the course, but they say walking away was not an option. Maria says the support from the community and friends was invaluable. Community means a lot to this couple.

With Avenue now serving once again, a grand reopening is planned for Sept. 7. The celebration coincides with the towns’ First Friday event.

The restaurant will stay open through the fall and early winter season and, for the first time, on New Year’s Eve.

Maria glances out the windows at the panoramic view and says, “is there a better place to enjoy the fireworks?” They will close in January and February to get ready for their eighth season.

The Avenue Waterfront Grille is located on the first floor of the Waterfront Shops on Queen Elizabeth Street in Manteo. The restaurant is open for lunch and dinner and available as a wedding and special events venue.