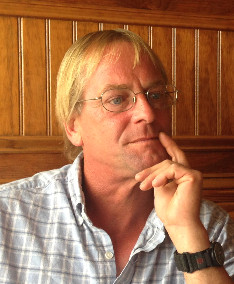 Mark Edward White passed away unexpectedly at his home Sept. 17, 2018. He was 53.  Mark was born in Virginia Beach.  He was the son of the late Elswood and Rose White.

Mark spent his childhood years throughout Dare and Currituck counties. Always inquisitive, he loved tinkering and eventually started his own successful small engine repair company based in Manteo.  Besides engine work, Mark acquired several local properties which he developed and managed. A gentle spirit, Mark most enjoyed spending solitary time at home and spoiling his grandchildren whom he adored.

Mark White is survived by his only child, Naomi Marie Draper; his son-in-law Jonathan and his two grandchildren, Hannah and Nathan, all of Manteo. Other survivors include his two brothers, David E. White (Shirley) of Utah; Michael T. White (Donna) of New Hampshire; one sister, Karen R. Walker (Joel) of Florida and many in-laws, extended family members and loyal friends.

Mark’s funeral, committal and burial will be held graveside at Roanoke Island Memorial Gardens in Manteo Friday, Sept. 21, 2018 at 2 p.m.

Condolences to the family may be expressed atwww.gallopfuneralservices.com. Gallop Funeral Services, Inc. was entrusted with local arrangements.