Katharine the shark is back 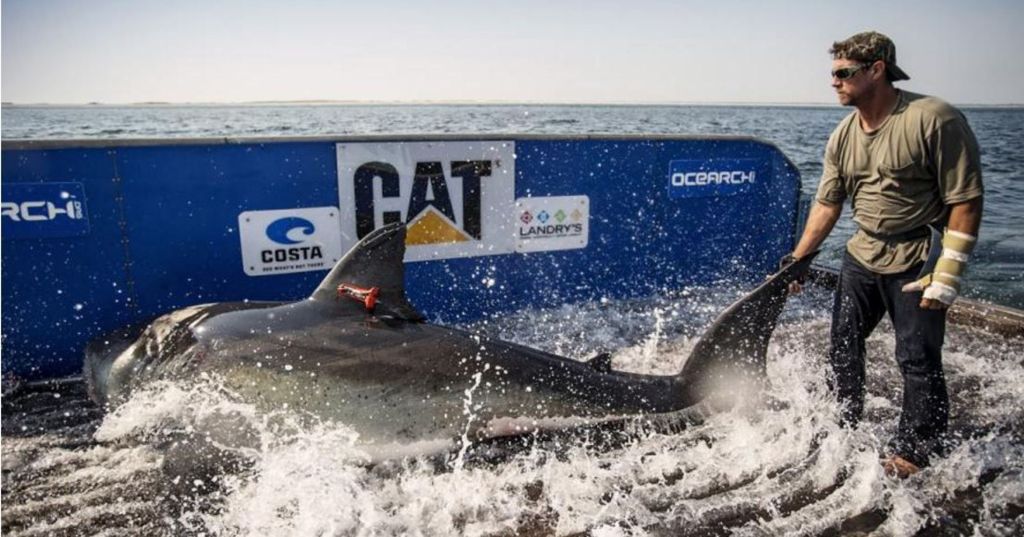 Katharine, a 2,300-pound tagged great white shark, is spending some time off the coast of Kitty Hawk this week. Photo courtesy Ocearch

After not a peep since January, Katharine the great white shark has pinged just off the coast of Kitty Hawk twice this week.

The 14-foot, 2,300 great white is one of dozens of sharks tagged and tracked by Ocearch, a Massachusetts-based organization dedicated to studying sharks in conjunction with conservation outreach and education.

“Thought you’d seen the end of my sassiness did ya? Think again…I’m back baby! Enjoying the fine waters off the coast a little north of Kitty Hawk, NC right now,” Katharine’s Twitter page reported Wednesday.

Researchers thought her tracker battery had run down since she hadn’t been heard from since January, but she’s pinged twice off the coast of the Outer Banks this week, once Wednesday evening and again Thursday morning.

“We’re excited to see if she heads to a birthing site or a mating site,” Ocearch said on its website.

Katharine was originally tagged off the coast in Massachusetts, and was name in honor of Katharine Lee Bates, a Cape Cod native and songwriter best known for writing “America the Beautiful.”

Katharine the shark’s check-in marks the third time this year Ocearch sharks have pinged off the Outer Banks.

In July, Hilton the great white shark pinged off the coast of Hatteras Island’s Avon.

In late March, George, a 9-foot-10 inch, 702-pound white shark tagged in Massachusetts in 2016, pinged about 25 miles off the coast of Ocracoke. He’s believed to be the son of Mary Lee, the great white made Internet-famous by Ocearch and Twitter in the last few years.

The next day, a tagged Mako shark named Oscar, weighing in at 320 pounds and 7 feet 8 inches long, pinged about 50 miles off the coast of Nags Head. Oscar was tagged in Cape Cod in 2015.

Follow the travels of Katharine, Hilton, George, Oscar and other sharks around the world at ocearch.org.