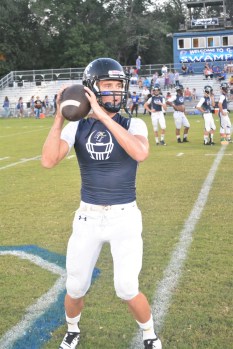 First Flight senior quarterback McCoy Davenport gets solid reps before the Camden game and his accuracy showed when he hit several of his favorite receivers in the 48 to 7 blowout. Photo by Daryl Law

After pounding Camden 48 to 7 last Friday night in The Swamp, First Flight has a bye this week giving them extra time to prepare for an away game at Bertie on Oct. 5 at 7:30 p.m.

Coach Jim Prince and crew put on quite a show in Camden. The Nighthawks scored another four or five touchdowns that were called back for penalties.

Again, Prince’s team was pumped up and ready for action and it showed with a variety of long pass and running plays for scores. In the opening quarter, Parker Sylvia and Shane McKenna scored the first two touchdowns.

Coach Prince was happy with the defense including a big hit by Cole Kelly. “Great tackle!” the coach yelled from the sidelines. Next, Cole Tomlin had a one-handed tackle and then Kelly next scored on a reception.

The quarter ended 20 to 0. In the second, the ‘Hawks ran a succession of scoring plays that were nearly all called back.

Eventually, they back back on track, however, and were able to score successfully the rest of the night,

With 3 wins and 2 losses, First Flight appears poised to take down Bertie, a team Manteo lost to by 10 points last Friday at home, 32 to 22.

Redskins coach “Sport” Sawyer says they’re working hard in practices on several things intended to help them become more competitive in the second half. He’s not sure if it’s a conditioning issue or what.

“Against First Flight and Bertie, we were a little flat in the second half,” he said Monday night. “So we’re looking at it to see how to get things going.”

Sawyer thinks his guys might relax “too much” during the halftime. Last week, the Redskins were up at half but it didn’t last long as the Falcons racked up 20 points in the third quarter and eventually grabbed the victory, 32 to 22.

As for this Friday’s meeting with Northside – Pinetops, coach Sawyer said he expects them to be pretty good.

“They’re athletic with speed and some size,” he said, “a good little running team.”

The Redskins certainly have their own weapons too despite the fact they only have a handful of seniors who start. In practice, they continue to work hard building and rebuilding.

“They’re fighting in practice and getting better every week,” Sawyer said.