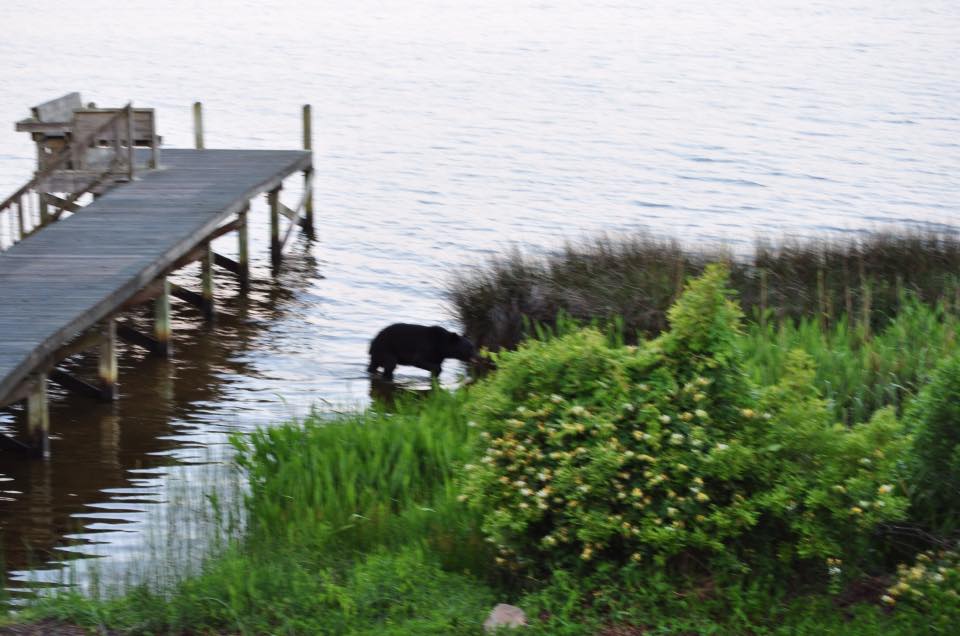 A black bear ambling through Duck earlier this year. Photo by Sean Cogan

In the wake of Hurricane Florence, the NC Wildlife Resources Commission reminds people that wild animals may be temporarily displaced, but given time and a wide berth, will eventually return to their natural habitat.

Wild animals are well adapted to surviving on their own, and human intervention, whether attempting to provide food or shelter, is usually unnecessary and can be harmful to the animal. Biologists with the agency’s Wildlife Helpline are fielding multiple calls a day from concerned citizens who have seen a variety of wild animals, particularly young squirrels, that appear to need help.

High winds in early spring and fall often knock down active squirrel nests, leaving the young temporarily stranded on the ground. It may seem like a good idea to move them to safety, but this is usually not the best option, even if the young appear to be abandoned.

“Young squirrels found on the ground should not be taken inside, as this prevents the female from retrieving them after she has prepared a replacement nest,” said Falyn Owens, an extension biologist with the commission. “The young can, however, be placed together nearby in an open box or container that protects them from wind and rains, as long as the female is able to find and retrieve them when she is ready.”

Young squirrels that are obviously injured and have not been retrieved by the female after 24 hours can be taken to a commission-licensed wildlife rehabilitator. However, Owens noted that due to the recent hurricane, some rehabilitators may be at full capacity and unable to take in additional animals.

Fortunately, Florence’s timing bodes well for other breeding species that could be affected by the storm. Sea turtles and coastal shorebirds are mostly finished nesting this time of year, so the overall impacts to their populations will be minimal at this point. “By late August, most young shorebirds have fledged and can fly to safe areas,” said Sara Schweitzer, the commission’s Wildlife Diversity Program coordinator.

Breeding species aside, flood waters have temporarily displaced many other wildlife species as they seek higher and drier ground, even those that can swim. Snakes and alligators will often move out of flooded areas to find refuge that doesn’t require them to swim continuously.

“Seeing a snake, even a venomous one, is no cause for alarm,” said Jeff Hall, a biologist with the commission. “As with any snake encounter, just remember that snakes will typically leave you alone if you leave them alone. Snakes are not out to get people, they are just trying to flee the storm effects, like any other species.”

To prevent wild animals from seeking shelter under or inside buildings, all access points should be closed off. Brush piles can also attract wildlife like raccoons and opossums, so place them away from buildings.

Now that the rain has ended and floodwaters are receding, animals should begin returning to their natural territories.