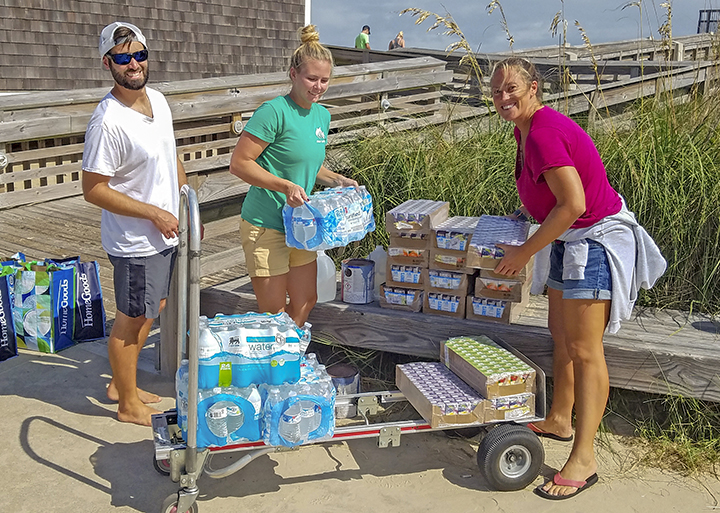 Jennette's Pier staff, from left, Keith Partlow, Jenna Livernois and Christin Brown, load up a Hardy Moving and Storage truck with donated goods and supplies for Hurricane Florence relief down south as part of the Hearts That Care drive. Big red drum have been biting at Jennette’s this past week. (Courtesy photo)

Things on land are finally getting back to normal down on Hatteras Island after Hurricane Florence and for those who have time to fish, fishing has been good. 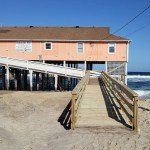 The Rodanthe Pier’s ramp has been rebuilt. 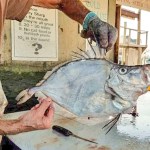 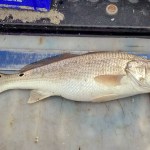 In Buxton, Julia Yeingst reported that she and a friend had some fun getting hooked up on puppy drum last Friday. (courtesy photo)

Rodanthe Pier’s entrance ramp is back up and they’re back in business 7 a.m. to midnight daily. Midweek, they were catching blues, sea mullet and flounder, reported Jim Focht. The water remains warm there at 78 degrees on Wednesday. He noted no big drum yet but added “I know they’re on the way!”

The night before they re-opened, the Rodanthe Pier folks gave a big shout out to those who helped them get the ramp, and therefore the business, back up and running.

In Avon, Tobi Warner said they’ve been getting blues, a few small speckled trout and pompano in 80-degree water. The pier and Koru area did fine in the storm, she added, with just a few loose boards and broken lights here and there.

“We really got lucky, we didn’t have any damage at all,” Warner said.

In Buxton, Julia Yeingst reported that she and a friend had some fun getting hooked up on puppy drum last Friday. “Fish on y ‘all!” she said.

Across the inlet on Ocracoke, Jimmy Wroboeski at Tradewinds Tackle Shop had a glowing report about fishing but did mention the northern entry road was “washed out” on Wednesday afternoon.
He said the first big bull red drum of fall was reported Sept. 25.

“An 80-year-old man caught it – they were stoked!” Wroboeski said.

“It’s still summer – every species is still around and a few puppy drum were caught middle of the island yesterday,” he said. “At the inlets are little blues on lures along with pompano and sea mullet.

“In the sound, puppy drum are being caught on bait and big drum in the evenings and at night,” Wroboeski added.

Offshore, the Gecko recently had a successful trip including two wahoo and some Mahi he added.