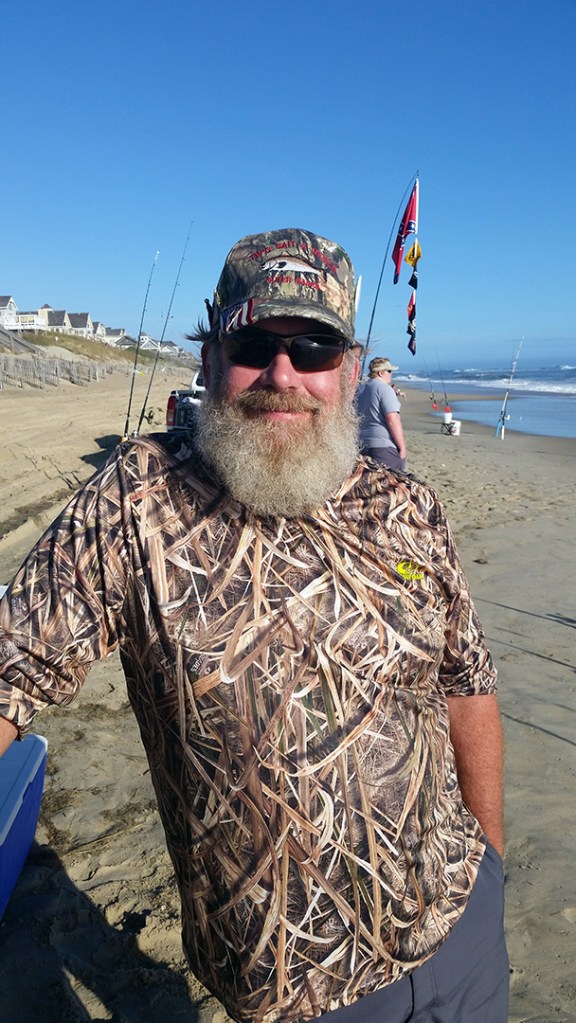 This “world’s largest” surf fishing event draws 480 anglers to town for several days of fishing and nights of fun. This week, organizers were forced to adjust the format because beach erosion has made several skinny spots along the beaches.

So this year’s tournament has been changed from four sessions into two longer sessions; Thursday morning from 7:30 a.m. to noon and Friday 8 a.m. to noon. No afternoon sessions.

A great way to start these sessions is with a run to Ms. Helen’s for big cheese biscuits with egg and bacon with black coffee before heading out on the beach to get set up.

Once the event gets underway and a fish does come knocking, the action cranks up! You race to get it on the dry sand and hope the catch is long enough to score points for your team.

Be sure to hold your tongue just right, keep your rod tip straight up and make sure that line is tight! I love the fact that there’s so much variety this time year, you never know what’s going to bite.

Once your catch is on the beach, get it in your bucket of water and have the roving judge score it quick. Although the club encourages releasing catches, some anglers keep theirs for a week’s end fish fry.

Three vehicles per team are allowed to drive out to the stations with permits issue by the town.

Seasoned drivers slack their tires back to make beach driving easier and they also park parallel to the surf line to allow for more room for others to navigate the soft sand tracks and narrow erosion hot spots.

Every year, some folks predict: “There’s not enough beach!”

And this year, they are right, it’s thin in spots so the club leaders had to relent to Mother Nature and shorten the tournament to give high tide a free run both afternoons.

Then there’s this too: “they’re gonna run out of mullet!” But the show almost always goes on even when hurricanes bring massive quantities of Sargasso weed to the shore or northeast winds drive you back into the truck cab.

In fact, my team, Extreme Team, has been around since 1999 and the event was only cancelled once, back in 2016 for Hurricane Matthew.

The Extreme Team has a new logo and new team shirts this year thanks to Rick Denton of Kitty Hawk.

So far this week seems to be shaping up great weather-wise and we’re excited to take a shot at winning the event by scoring the most points out of the 80 teams.

Our team mainly consists of high school friends from back home in Charlottesville and several other friends I made at college or working construction since then.

A few of each variety have come and gone, but there’s still four of us who played football together in the late 1970s and early ‘80s at Albemarle. We went 7-3 senior year.

Of course there’s plenty of camaraderie involved when we all get together and it’s a lot of fun carrying on from sun up until evening.

Memories are made with a hard-fighting puppy drum or a flounder that bites while retrieving your line through the trough. Doodlebugs catch blues way out on the bar and gold hooks lure pompano to bite and run.

Over the years, we’ve found great tackle at Ben Franklin and T.W.’s where Nick always seems to keep fresh finger mullet in the box out front.

They also serve up some mean chili dogs on Friday at lunchtime. At tournament headquarters, the Ramada banquet staff fixes a buffet meal each night, Wednesday through Friday.

And on Friday night when all of the scores are tallied, winners are adorned with rod and reel combos, trophies, big coolers, sand spikes and most importantly, bragging rights for a year or longer.

This year, Rick’s come up with a new team shirt design and Wyatt has created a customized flag. Bucky’s sure to order the salt herring at Nags Head Pier one day and Doug, well, he’ll be Doug. Hopefully Sean can postpone his work and everyone can fish both sessions.

As captain, I’ll do my best keeping an eye on these characters, their score sheets and Doodlebugs, which have been known to disappear off each other’s tailgates.

One thing is for sure, if you fish hard in this event, your feet, legs, arms, shoulders and back will be sore as heck and will require Ibuprofen.

But great memories last much longer than the soreness and besides, you get to have two days of fun fishin.’