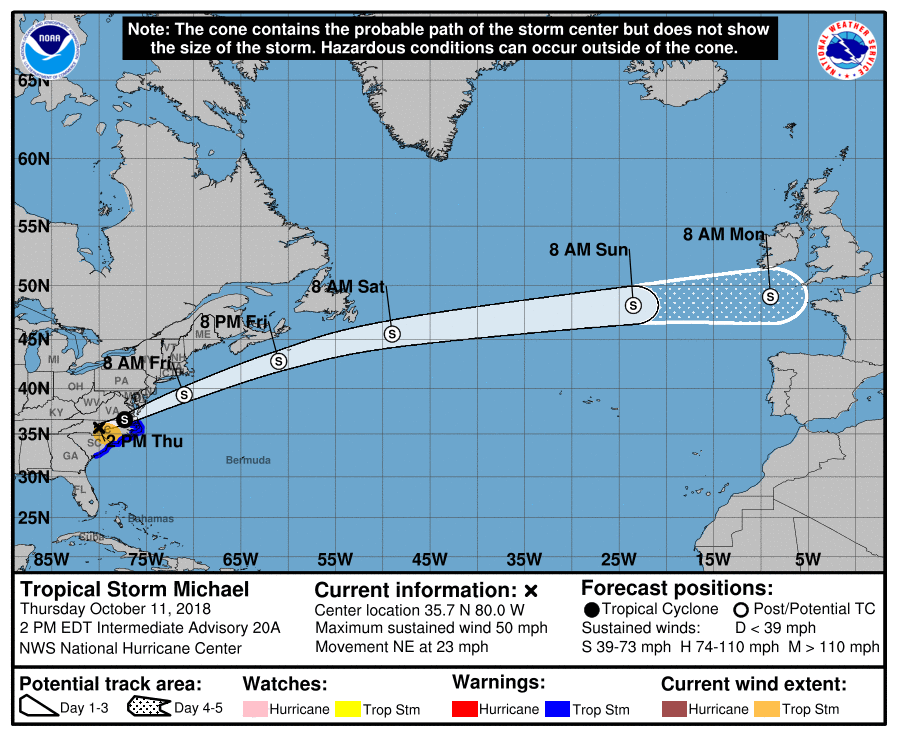 Tropical Storm Michael was moving northeast at a speed of 23 miles per hour at 11 a.m. Thursday, Oct. 11.

The eye is about 300 miles west of Buxton. Tropical storm force winds extend outward up to 185 miles, mainly to the south and east of the center.

The winds will shift. Around 6 tonight, the winds will start a shift to the southwest and blow around 40 miles per hour with gusts up to 55.

The National Weather Service in Newport/Morehead City predicts of two to four feet of soundside flooding from Avon to Nags Head and possibly up to 2 feet for Hatteras village.

Rainfall across the region is expected to run ½ to one inch from Hatteras village south and one to 1½ inches in Rodanthe, Columbia and Duck.

The National Weather Service states that seas will build to 10 to 15 feet creating dangerous marine conditions.

A high threat of rip currents has been in place on all Outer Banks beaches for the last week, states the National Park Service. Life-threatening rip currents for all area beaches are predicted to continue.

Cape Hatteras National Seashore campgrounds at Oregon Inlet, Cape Point, Frisco and Ocracoke are scheduled to close at 6 p.m., Thursday, Oct. 11. “The campgrounds will reopen after the Tropical Storm Warning for the area is lifted,” states a media release.