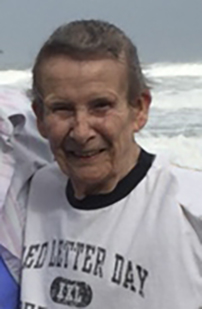 We recently lost a beloved member of our Manteo Outer Banks Family. Roberta Leigh Andrews, known as “Little Leigh,” born January 6, 1937 and she died peacefully on September 22, 2018.  She lived on the Outer Banks for 35 years and has made a huge impact on our community and will live in our hearts forever.

Her smile and kindness was infectious.  Leigh had a love for cats.  She was our friend and was always there for anyone who needed an open heart or just someone to listen.  Some people are one in a million and Leigh was a once in a lifetime friend, mentor and advisor that will be deeply missed by all the lives she has touched.   Her love for music and dancing was known by all who knew her.  When the music started Leigh was on the dance floor.  Oh how she loved to dance.

No doubt she’s somewhere playing golf, surf fishing and having a scotch with a big smile on her face; not to mention waiting for UNC basketball to begin.  You have left us with so many cherished memories they will last forever.  God keep and bless you Little Leigh.

Dance on our sweet friend Dance on.

Come celebrate the Life of Little Leigh on October 28, 2018 from 3:00pm to 7:00pm at Poor Richards in Manteo, North Carolina