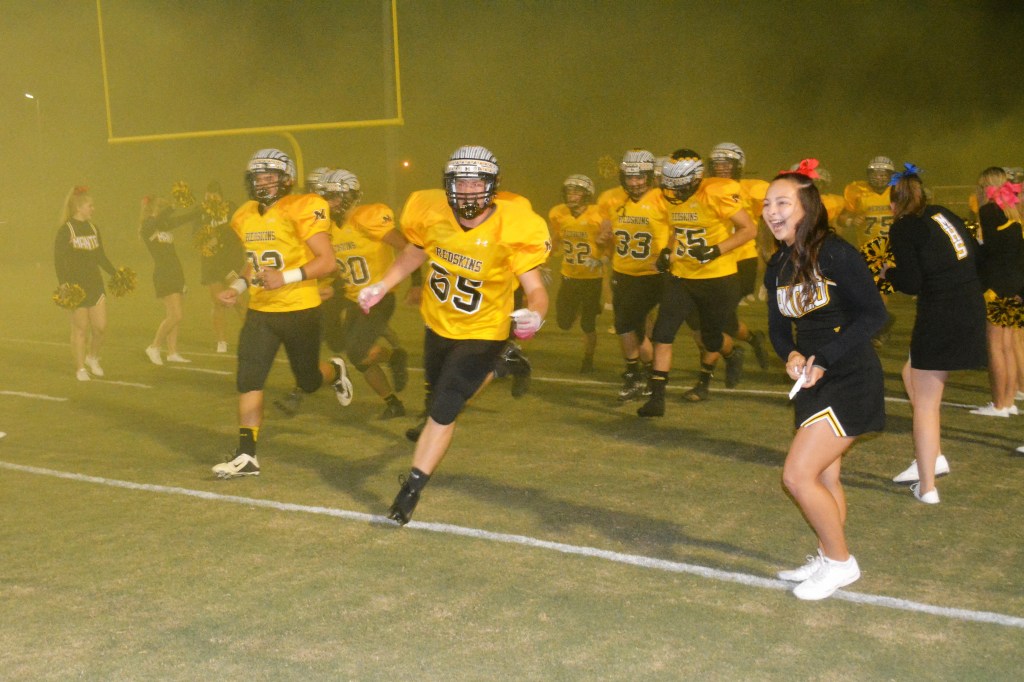 Golden Haze – Redskins football players and cheerleaders got things wound up early when the guys broke through a paper banner to take the field for Homecoming 2018. Daryl Law photo

The Manteo Redskins used a potent air assault and speedy running backs to defeat the visiting Camden Bruins by the score of 53 to 13 on Homecoming last Saturday night. The first strike came on the ’Skins second play from scrimmage that was good for six points.

From there, Manteo never looked back and scored easily throughout the first half, which ended 40 to zip. 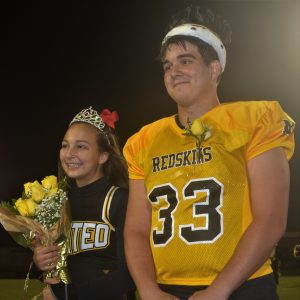 Coach Sport Sawyer was able to play his back-ups in the second. In the end, the ’Skins passed for 100 yards and ran for 55 more. Although he was happy with the victory, Sawyer is not so happy about his teams’ 4-4 overall and 1-1 conference records.

“I though the guys played well, we’ve had an up and down year,” he said. “We’ve played some good halves but really haven’t played a complete game.”

Coach Sawyer said he’d like to see the Redskins come out and play hard for all four quarters. He also pointed out that Camden is in a rebuilding year and is “kinda young.”

“Every game, we’ve been winning or down by one score,” he said. “On the four losses, we’ve kind of let those go. Our record of four and four, I don’t really like but we’re working on that.” 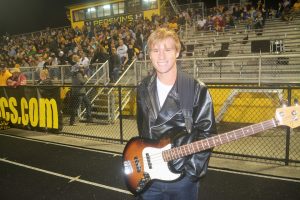 As for Perquimans away this Friday, Sawyer said the Pirates have merged their varsity and junior varsity squads into one team. Although the team is winless, Manteo can’t afford to look past them. Instead, he wants his guys to go out and play a solid game.

“They’re athletic, we gotta play some sound football – you can’t overlook people,” the coach added. “We’re not in that situation.”

Sawyer said Perquimans will spread the ball out and run a little option with plenty of quarterback keeps. The Redskins can expect to see a three, four defense.

As for Manteo’s QB Bryson Sawyer, he had a heck of a game and hit multiple receivers on both long and short routes making for a fun game to watch.

“Bryson, he’s got a pretty decent arm, and he’s a tall guy, pretty good size,” coach Sawyer said. “He’s developing this year, getting his reads down and getting the ball out quick – we’ve exciting about that. 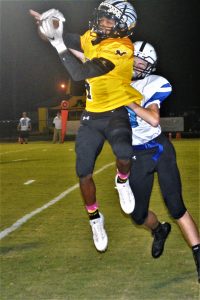 Senior receiver Claveon Rice gets great possession against a Camden defender to make this catch on Manteo’s second play from scrimmage, a 14-yard pass and catch, which resulted in a Redskins’ first touchdown. Daryl Law photo

Coach said helping Sawyer get the job done are key play makers Claveon Rice, Eric Bailey, Shymeek Pledger and Wes Mitchum, who all played well in the Homecoming game. In the trenches, the Redskins have center Hayden Scott, guards Dylan Sharp and Mickey McCallum along with tackles J’veon Tate and Kyle Soles.

Most of the Redskins play both defense and offense, coach Sawyer added. “I’d like to two-platoon it but that just hasn’t worked,” he said.

One thing that has worked out well for Sawyer and his troops is total support from the school, athletics director Alfie Wheeler and the Black and Gold community.

Homecoming drew a large crowd and they weren’t disappointed. Between all of the Redskins’ scores, the crowning of the queen and king, Aiyana Mourino and Josh Houston, at halftime and a rocking band in the stands, this was a great night for Manteo High School and beyond. There was even an extra concessions stand with flashing neon lights. 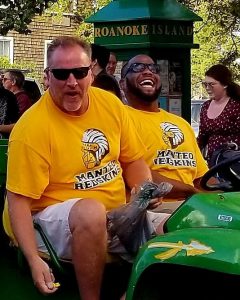