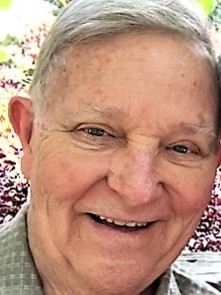 He was the son of the late Claremont and Rose Van Curen Sobczak of Chicago, Illinois. He proudly served our nation in the United States Air Force for twenty years, then worked for AT&T until retiring.  Rich wed his childhood sweetheart, Mary Ann, and they were blessed with two sons, both of whom survive: Rick Van Curen and wife Sheri of Linden, Virginia, and Mark Van Curen and wife Kari of Aldie, Virginia. His family grew years later with the addition of three grandchildren: Jenni, Kristin and Tim of Virginia. Rich’s brother Don and wife Lee Ann, of Portage, Indiana, also survive him, as do his niece and nephews Kelly, Kim and Keith.

In 1999, Rich and Mary Ann moved to the Outer Banks, especially enjoying the congenial atmosphere.

Those who knew Rich throughout his productive and full life know how passionate he was about Boy Scouts.  Rich became involved with Scouting when his sons joined, and he soon became a Den Leader, a Weebelos Leader, and Scout Master for Troop 1400 in Dale City, Virginia.  He was awarded the prestigious Silver Beaver and served as a staff member of countless Wood Badge courses, including the elite Scout Master.  He also was a member of the Buffalo patrol, which created his enduring love of bison and spawned an impressive collection of buffalo items.

He was equally passionate about duck carving, teaching himself how to create eloquent decoys, carving and painting them to mimic real fowl.  He often would be found in his work shed fastidiously making decoys to share with family and friends.

A Mass of the Resurrection will be celebrated at 11 a.m. on Friday, October 19 at Holy Redeemer by the Sea Catholic Church by Rev. John A. Hanley, osfs. The family will receive friends and relatives Thursday evening from 6 p.m. until 8 p.m. at Twiford Colony Chapel, Manteo. Rich will be buried in Quantico National Cemetery on Friday, November 2 at 11 a.m., commemorating his selfless years proudly serving his country.