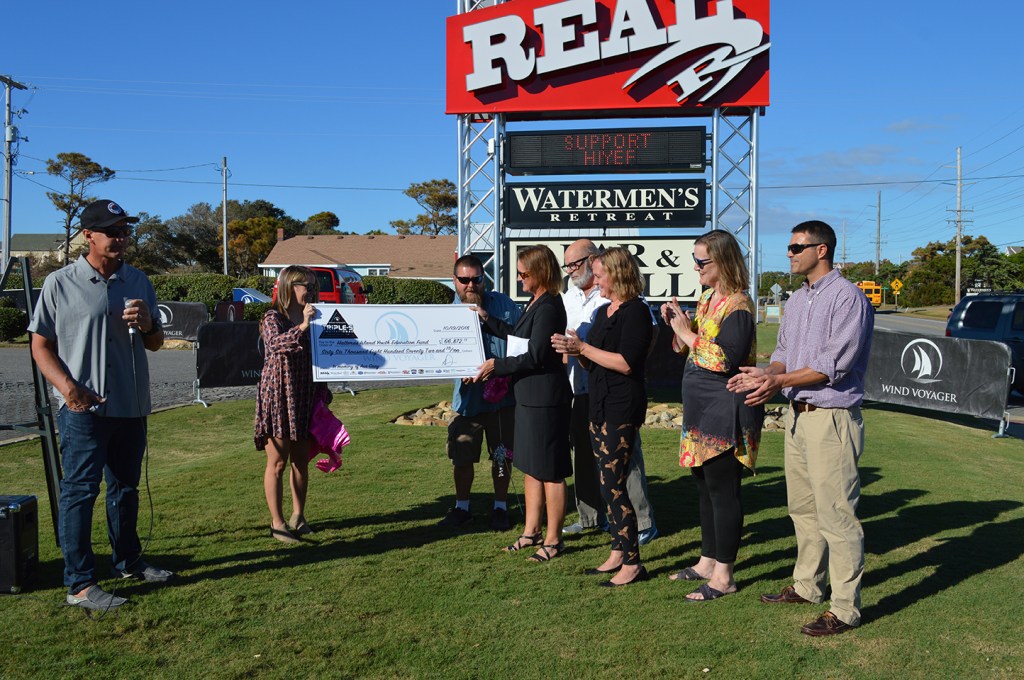 The Hatteras Island Youth Education Fund received a check for $66,872.73 at REAL Watersports on October 19.

The funds were raised during June’s Wind Voyager Triple-S Invitational. The international event is widely regarded as the world’s #1 professional kiteboarding event and is hosted by REAL Watersports in Waves.

This is the third year that Hatteras Island Youth Education Fund has been the charity beneficiary of the competition. The Sunset Swim Charity Fashion Show and ticket sales for evening music concerts generate the funds. For the fashion show, auctions and raffles add to ticket revenue for paid seats.

This year, Trip Forman, co-founder of REAL Watersports, announced the funds were donated in memory of Asa Gray, a REAL neighbor and supporter of the Wind Voyager Triple-S Invitational. Asa Hamilton Gray III passed away July 5.

Forman saluted Gray’s dedication to his children’s education and sports. “He was always involved with kids.”

Gray’s daughter Caitlyn Gray thanked REAL and said her father “would be proud and honored” by the dedication.

The Hatteras Island Youth Education Fund supports the educational needs of elementary and secondary school students on Hatteras Island by providing funding for equipment, materials and experiences that would otherwise not be available to these students through public funding.

Jean-Louise Dixon, director of the Hatteras Island Youth Education Fund, listed some of the 23 education investments in Cape Hatteras Elementary and Secondary Schools.

In 2018, education fund grants have purchased fitness equipment for the secondary school and installed a new water fountain with a spigot to fill reusable water bottles at the elementary school. Safe and proper seating was purchased for pre-k students. At least four grade level or special field trips have been paid for by the foundation, including support for the Science Olympiad competitors.

The Wind Voyager Triple-S Invitational is supported by 43 local and national sponsors. The charity fashion show has 36 corporate sponsors.

“It’s great to take the international exposure and the excitement of the Wind Voyager Triple-S Invitational and redirect the spotlight on the youth of Hatteras Island. Our hashtag for the last three years has been #ItsForTheKids,” said Forman.

REAL Watersports and the Hatteras Island Youth Education Fund plan to continue their partnership next year, states a media release.