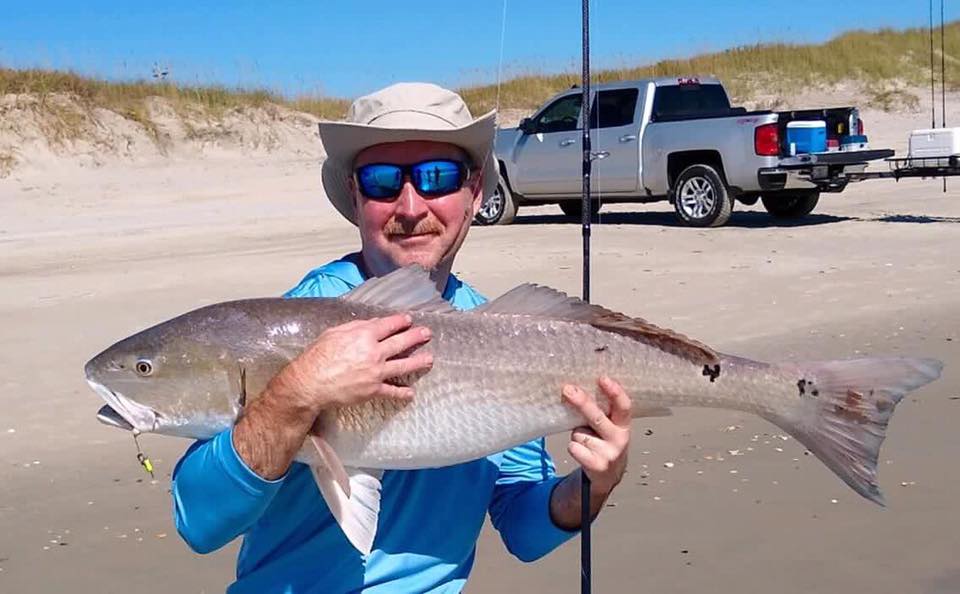 October fishing has been off the hook.

From Nags Head to Ocracoke, anglers can expect to see all sorts of variety including speckled trout, red drum and puppies, flounder, blues, pompano Spanish mackerel and more!

At Jennette’s Pier, the fishing report includes day after day of super fishing. One afternoon earlier in the week, they were catching throwback trout and nice blues with every cast of a Got-Cha plugs.

Nora Hartlaub of Roanoke Island relished in the excitement of her first saltwater fish when she reeled in one fish after another. As the sun set that day, anglers fishing the north side were tearing up the blues and specks; releasing most of them. 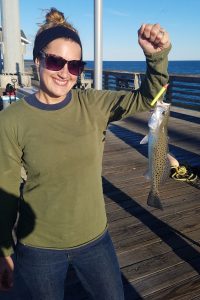 Nora Hartlaub of Roanoke Island flashes a big grin because she was so pumped up about catching this speckled trout on Jennette’s Pier Monday. Courtesy Jennette’s Pier

In the days that followed, the pier report said there were plenty of black drum, nice-sized spot, croaker, puppy red, red drum, gray trout, sand perch and sea mullet. Jennette’s remains open from 6 a.m. to midnight through the end of the month. November hours are 7 a.m. to 9 p.m.

Down on Hatteras Island at Hatteras Jack in Rodanthe, Ryan White said he’s been getting excellent reports on multiple fronts too.

“This morning (Oct. 24), blues and trout were biting at Ramp 34,” he said. “and there was a good bit of flounder on north side of Rodanthe Pier yesterday on an incoming tide.” White’s also been seeing a lot of slot drum.

“It was a right nice little run,” he said.

Small trout and puppy drum have been found on the soundside between Salvo south to Avon as well.

On Ocracoke, Ken Debarth of Tradewinds Tackle reported things had slowed down some by Wednesday but in general, fishing has been great. 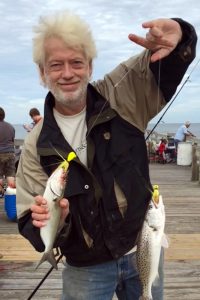 “There are lots of citation drum in the surf along with little pups, flounder and someone even caught a Spanish mackerel on bait in the surf,” he said.

“No sea mullet but lots of blues,” Debarth added. “Up in the sound there are big drum massing up around the inlet. It’s excellent fishing when you can find them.”

He also said he hoped the forecasted coastal storm wouldn’t mess up the fishing or the Blackbeard pirate festival. A northeasterly blow could make the water temperature drop but that only makes the red drum fishing better, Debarth said.

On Tuesday night, Debarth said the sound water was 74 degrees and he heard a rumor black drum were only a buck-an-ear – aaarrrrgggg!