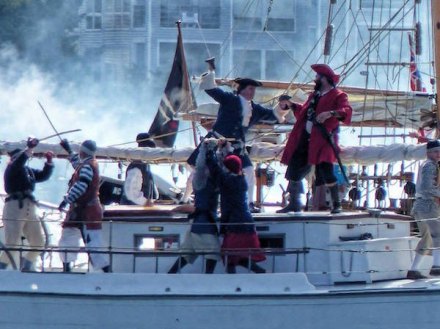 OCRACOKE, NC – Chart your course for the Ocracoke Blackbeard’s Pirate Jamboree to commemorate the 300th Anniversary of Blackbeard’s historic last battle directly off the shores of Ocracoke Island. Step back in time with the sights and sounds of 17th- and 18th-century pirate life as Ocracoke Island comes alive with pirate reenactment crews as they invade by land and sea. The whole family can enjoy musical entertainment, magic shows, living-history exhibits, period encampments, food and craft vendors and a live three-ship battle with cannons on Silver Lake. The event is free to attend, except for a few ticketed events.

This year’s event, sponsored by the Ocracoke Civic & Business Association, was expanded to four days, and started Thursday, October 25 evening through lunch on Sunday, October 28.

These historically accurate camps teach about the 17th- and 18th-century maritime heritage, from navigation, weaving and cooking to ship board medicine and hygiene.

The Jamboree will conclude with the memorial to both Blackbeard’s and Maynard’s crews Sunday morning at 10 with a march from Blackbeard’s Lodge to the beach at Springer’s Point. Lunch with the Pirates will follow at noon in Ocracoke Oyster Company. A brief schedule is below, and a detailed program of events is available on the island in the Blackbeard’s Pirate Jamboree Program and online at www.visitocracokenc.com. 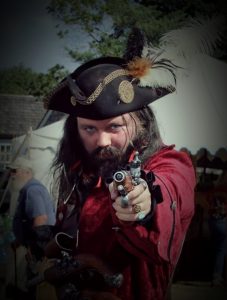 • “The Ranger” at the Wahab House docks

Books to Be Red Stage

Noon: What was Blackbeard doing at Ocracoke? Kevin Duffus

4:30 p.m.: Tom Mason and the Blue Buccaneers. A wild band of Nashville musicians who dress like pirates and play a rollicking mix of piratical sing-alongs, rave-ups, rock and more.

8 p.m.: Bawdy Beer Garden, sponsored by 1718 Brewing Ocracoke. A vivacious and informal round-robin exchange of bawdy songs that date back hundreds of years is sure to make you blush. $5 Admission. Cash bar with beer and refreshments.

Other Events around town

10 a.m.: Springer’s Point Memorial Service for those killed in Blackbeard’s Last Battle. Join the crowd as the Pirate and Militia Crews march to beautiful Springer’s Point to honor those who perished on that fateful day, Nov. 22, 1718. The Militia’s cannons will kick off the march at Blackbeard’s Lodge. Join in at any point along the route.

Noon – Ocracoke Oyster Co.: Lunch with the Pirates. Join in closing out the festival at a rousing brunch with the pirates. Your chance to sit down with pirate crews and enjoy a great meal.

Ocracoke’s Jamboree is part of the N.C. Department of Cultural Resources promotions this 300th anniversary year.

The Hyde County Tram System will also operate throughout the Jamboree weekend from 10 a.m. – 9 p.m., taking visitors around to tram stops throughout the village.

Public parking is available at the NPS Visitors lot at the south end of the island, 4352 Irvin Garrish Highway.

For details about Ocracoke’s Jamboree, visit the events page at www.visitocracokenc.com.

To learn about all that’s going on celebrating Blackbeard statewide, visit the website www.ncdcr.gov/bb300. 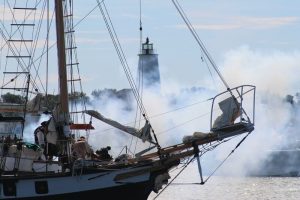 Ocracoke is the southernmost island in the chain of North Carolina’s Outer Banks, twenty-three miles offshore between the Atlantic Ocean and Pamlico Sound. This small barrier island has 16 miles of undeveloped beaches and is accessible only by private boat or plane or by the state-run ferry service. Ocracoke Village is on the National Register of Historic Places, with houses and buildings dating from the 1880s and the Ocracoke Lighthouse standing since 1823. Visit for a week or a day and discover Ocracoke: The Pearl of the Outer Banks. Learn more at VisitOcracokeNC.com.