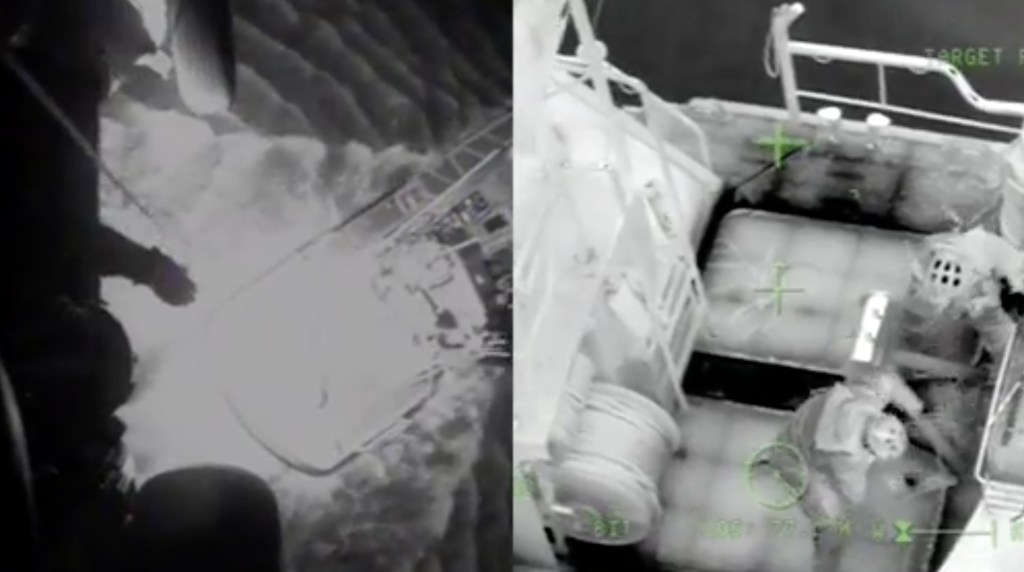 A Coast Guard MH-60 Jayhawk helicopter crew from Air Station Elizabeth City, North Carolina, medevacs a man who was reportedly suffering from heart problems on a fishing boat in Pamlico Sound, North Carolina, Oct. 30, 2018. The man was taken off of the fishing boat and put on a Coast Guard 47-foot Motor Life Boat from Station Hatteras Inlet before being hoisted up to avoid the obstructions created by the rigging equipment. U.S. Coast Guard still from video by Air Station Elizabeth City

The Coast Guard medevaced a 63-year-old man who was reportedly showing symptoms of a heart attack on the fishing boat Papa’s Girl, in Pamlico Sound, North Carolina, Tuesday evening.

A crewmember aboard the fishing boat contacted watchstanders at Coast Guard Sector North Carolina command center at 5:30 p.m., via VHF-FM radio channel 16 and notified them of the man’s condition. A 47-foot Motor Life Boat crew from Station Hatteras Inlet and an aircrew aboard a MH-60 Jayhawk helicopter from Air Station Elizabeth City launched to assist.

The man was transferred to the 47-foot Motor Life Boat due to the fishing gear obstructions aboard Papa’s Girl.

Once the man was on the boat, the aircrew conducted a safe hoist and transported him to Pitt County Memorial Hospital in Greenville.