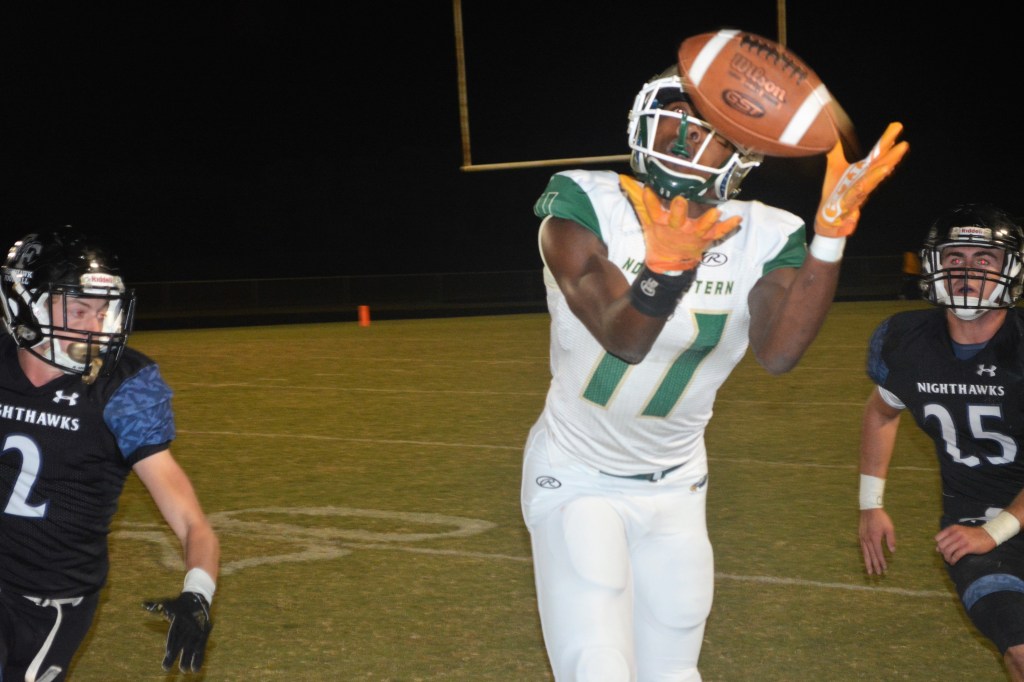 Northeastern 6 foot 5 senior receiver William Riddick attempts to look this ball in but dropped it while First Flight defenders close in. First Flight struggled on offense against the Eagles losing 42-0. Daryl Law photo

First Flight’s hopes of making the playoffs hinge on a victory over Currituck, who they play Friday night in Barco at 7:30 p.m. Coach Jim Prince says all of his guys are back, healthy and ready to play. He respects the Knights and says it will be a true rivalry battle to the end.

“I think they’re the best they’ve been in last several years, except for that year they won the whole thing,” he said. “They’re big; they’re strong and have perhaps the best athlete in the conference, No. 13, their quarterback [Jayden Calloway].

“He’s got great speed, he’s a winner,” Prince said. “He makes big plays and they’ll be a real challenge for us.”

Across the Currituck Sound, Knights coach Paul Bossi said he, too, expects a rivalry rumble on the gridiron. 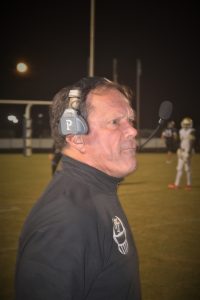 Coach Jim Prince directs his troops against Northeastern last Friday under a full moon, which is framed by the east goalpost. Daryl Law photo

“The boys have been working hard and we’ve lost some close ones,” coach Bossi said. “We’re making progress.”

The coach said quarterback Calloway is the real deal and he brings it all every time. He’s the leader of this 6 win-3 loss squad, who is 2-2 in the conference.

“He’s a great athlete and competitive,” Bossi said. “He’s going 110 percent all of the time.” 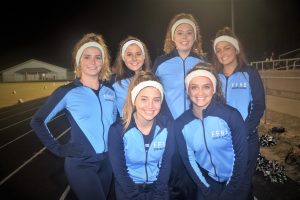 First Flight senior cheerleaders huddle together during halftime of the Northeastern game. They are, from left, back, Hayley Miller, Koral Tucker, and Izzy Warner. In the front are Caroline Murray, left, and Shelby Miller. Daryl Law photo

First Flight’s defense will again have to be on top of their game Friday. Last week, the Nighthawks defense played pretty tough against visiting Northeastern but the offense self-destructed and they lost 42-0.

“What’s crazy is we may have played one our best defensive games that we ever against them [Northeastern],” coach Prince said. “It’s just that our offense is struggling right now.”

“You can’t play a team that wins ten games every year [like Northeastern] and snap the ball over the quarterback’s head, get sacked and fumble the ball,” he added.  “You give up two touchdowns like that and then give another touchdown on blown coverage that’s 21 points we just gave them.”

Sports fans should be sure to get to Friday’s rivalry game early and stay until the end. All of these guys will be battling for bragging rights that last all year long.