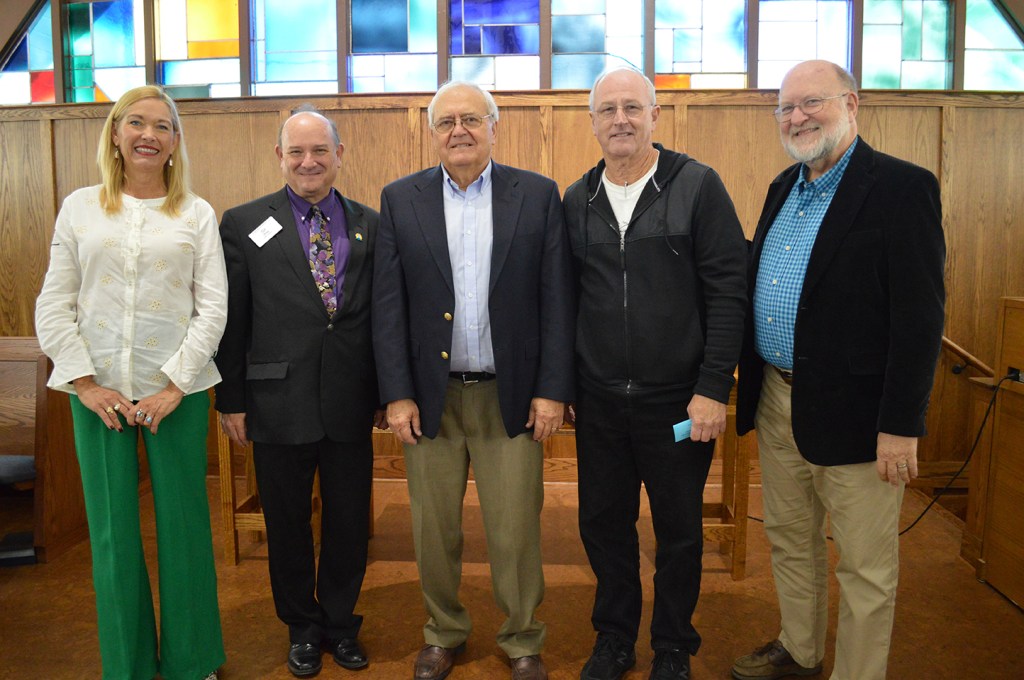 In an almost completely renovated Buxton United Methodist Church, volunteers and supporters of the Cape Hatteras United Methodist Men gathered Saturday morning, Oct. 27, to commemorate 40 years of service to others. 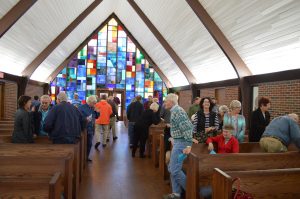 Members and supporters stand at the end of a worship service commemorating the 40th anniversary of the Cape Hatteras United Methodist Men. The service was conducted in the newly renovated sanctuary of the Buxton United Methodist Church. The sanctuary was expanded. New pews were made to match the existing ones which were refinished. The floor is new. At the front of the sanctuary, the chancel area is brand new. At the back, a new door is installed to a new courtyard. Mary Helen Goodloe-Murphy photo

Over those years, the organization has fed 19,000 people and used $2 million dollars to build ramps, keep lights on and heat in homes, install insulation, fix roofs, buy medicine and help with storm recovery.

To feed people, the organization operates the Hatteras Island Food Pantry housed at Buxton Methodist. Volunteers Ray and Claire Schaaf have led that mission for 18 years.

Cape Hatteras United Methodist Men is an ecumenical organization with Methodists, Baptists and Catholics doing the Lord’s work together and supported by Hatteras Island churches and generous individual donors.

This year, 35 volunteers trained to be an early response team. That team was called to work in Hyde County’s Swan Quarter and Engelhard for Hurricane Florence recovery work. Over 30 volunteers in a two-week period worked in Hyde County.

Attending the morning’s events was Pastor Jerald Craddock with Soule United Methodist Church near Swan Quarter in Hyde County. The pastor expressed his deep appreciation and respect for the work performed by the volunteers with the Cape Hatteras United Methodist Men. 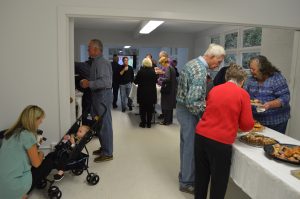 The emergency response team is continuing to work in northern Dare County to help with recovery from Tropical Storm Michael.

“We’ve been on the receiving end of this type of help many times. It’s good to show our gratitude by helping others in return,” said Dennis Carroll, who now heads the Cape Hatteras United Methodist Men.

The organization relies on special contributions for off-island work.

He called out past Social Services staffers along with the new staffer who have and are working with the Cape Hatteras United Methodist Men.

He acknowledged Amberly Dyer. She most recently volunteered for Hurricane Florence recovery work in Hyde County along with her husband Jon. Ashley Jackson, currently a social worker with Dare County Schools, is a hero of Hurricane Matthew. Now, Jessica Nonnenmocher is the Division of Social Services staffer who works with the United Methodist men.

Carroll acknowledged numerous leaders, like Walton Fulcher who together with Mark Caldwell started the organization 40 years ago.

Closing the worship service was Rev. Gil Wise, the district superintendent for the region. He provided the service’s scripture passage, Psalm 34.

Providing music was Clifford Swain, who sang “If Wishes were Fishes” and “Nothing Works Like Jesus Does.” Swain sang a duo with Rev. Toni Wood titled “One Small Star.”

Danny Couch, president of the Cape Hatteras United Methodist Men board, delivered a speech titled “The Tradition of Giving.” Couch traced the island’s and the organization’s giving tradition back to Manteo and the hospitality he extended to the English colonists. That tradition was practiced by the giving of the surfmen associated the U.S. Lifesaving Service and the villagers of that time.

Today, “thank goodness,” Couch said, “we have that goodness.”