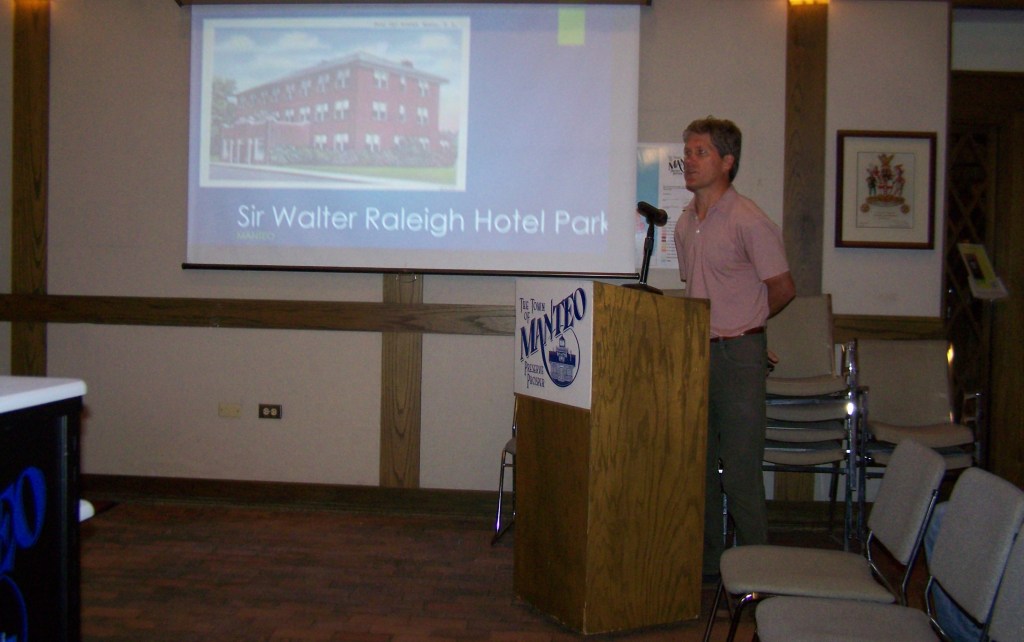 Landscape architect John Robbins appeared at the November Manteo board meeting and presented the commissioners with a general concept of options to develop a Manteo Commons, mixed parking lot and green space area. The park and parking lot would be located on the site of the soon-to-be-demolished old Fort Raleigh Hotel building on Budleigh Street in the downtown area of Manteo. G. Clark Photo

The Manteo Board of Commissioners have asked their manager and staff to secure an agreement that would allow the town to develop a Manteo Commons, mixed parking lot and green space area. If the plan comes to fruition, it would be located on the site of the soon-to-be-demolished old Fort Raleigh Hotel building on Budleigh Street.

Over the years, the building, now owned by Dare County, has been utilized as the hotel, an apartment building, Dare County Administration center and offices but has been vacant for several years. The derelict building and an adjacent structure are scheduled to be demolished in early December.

The green space parking lot is the vision of Manteo Mayor Bobby Owens. The mayor believes the project would ease summertime parking problems and at the same time combine an open park-like setting that would be attractive to residents and tourists. Owens hopes that additional county-owned buildings on Ananias Dare Street will eventually be included in the proposed Manteo Commons project.

At the request of Owens, local landscape architect John Robbins appeared at the November 7 board meeting and presented the commissioners with a general concept of options to develop the property. He showed commissioners ideas of landscaping, sculptures, seating and aesthetic features that could be woven into a parking lot space.

When Owens asked the board if they wanted to hire Robbins to begin working on a more formal plan, commissioner Christine Walker applied the brakes. Walker wanted to make sure a formal lease agreement with Dare County and the town was finalized. Other commissioners agreed, including Richie Burke, who said “let’s nail down the county first.”

Owens admitted any talks with the county officials had been informal, but indications were that the county would welcome the Manteo plan. Manteo commissioners are open to and appear favorable for the project and allowing staff to negotiate an agreement, but before the board commits funding, commissioner Nancy Peele summed up the boards feeling saying, “obtain the property first.”