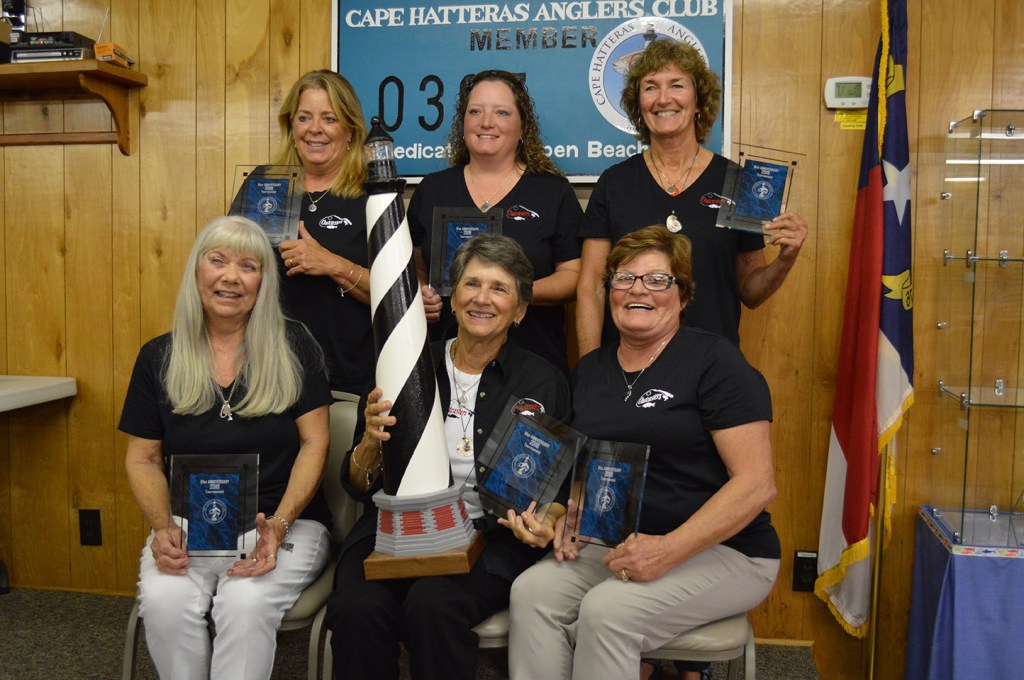 The team, Outcasters, came up to accept the award to a rousing ovation from tournament anglers gathered at the Buxton clubhouse.

This is the third year that a local team has won the prestigious tournament, the world’s largest surf fishing contest. The Outcasters team caught 47 fish and racked up 218 points to claim first place and the club’s Lighthouse Trophy for a year.

Outcasters moved into the lead from Thursday’s first session when the team caught 35 fish and scored 174 points to best all teams.

It been 27 years since the last tournament win by a women’s team. The Sand Bunnies captured first in 1991. 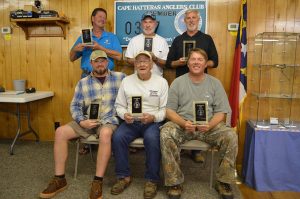 The Eastern Shore Landcasters from Delmar, Del., claimed third place with 10 fish and 101 points. Captain Garry Morris also caught the largest red drum by a male, at 46.25 incher. His name will be added to the Edgar O. Hooper Memorial Plaque which honors the angler who caught the largest fish. Eastern Shore Landcasters team members are Aaron Morris, Manson Jones, Cliff Parsons, Chuck Bare and Darrell Malone. This is the first time the team has reached the trophy stand.

Additional awards were presented to:

Robbie Barnes with the P.O.E.T.S. team for the largest fish other than a drum or bluefish caught by a male, 18-inch flounder.

Paula Masters with Sandbar Anglers, largest fish other than a drum or bluefish caught by a female, a 15.75-inch flounder.

The winning teams claimed session wins with The “F” team the winners of the second session on Thursday and the Eastern Shore Landcasters winners of Friday’s third session. Island Girls, another local team, claimed the top score for the fourth session.