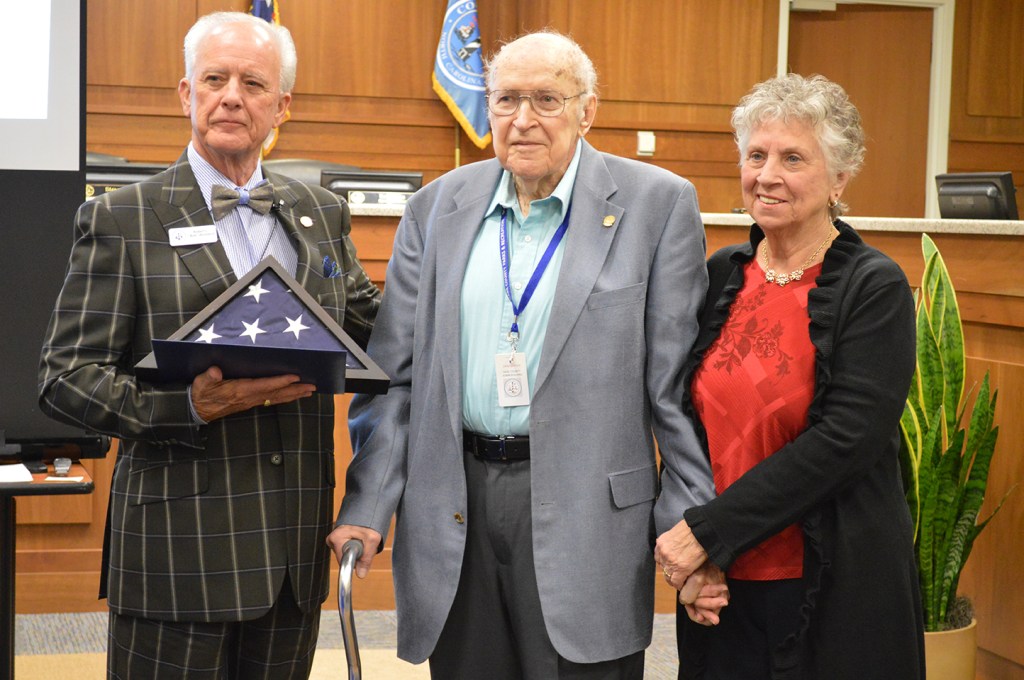 Commissioner Jack Shea, who is retiring, is honored at his last Dare County Board of Commissioners meeting on Nov. 19. Shea was first elected to the board’s at-large seat in 2006. Current board chairman Robert L. “Bob” Woodard holds the nation’s flag that was flown over the United States Capitol Building for Shea at the request of U.S. Congressman Walter Jones. The retiring commissioner is holding hands with his spouse, Jackie Shea. MHGM photo

After three terms and 12 years on the board as the at-large commissioner, Shea is retiring.

Board chairman Robert L. Woodard started the tribute at the opening of the meeting.

He served on the 5 on 5 committee, which brings Dare County and Dare Schools officials together. Shea has a “passionate voice for education,” said Woodard.

Shea, a pilot, served on the Dare County Regional Airport Authority, an organization he will continue to serve.

He developed a regional perspective by serving on the Albemarle Rural Planning Organization and the Albemarle Regional Solid Waste Management Authority.

He pushed and pushed for the board of commissioners to undertake economic development planning. Progress came in his last term with a North Carolina State University study and a contract with the Outer Banks Chamber of Commerce to begin implementing some study recommendations.

He is a “consummate gentleman,” said commissioner Wally Overman.

Shea is a WWII veteran. He serves, and will continue to serve, on the county’s Veterans Advisory Council.

At the conclusion of the presentation, the audience gave Shea a standing ovation.

Manny Mederios simply offered his thanks to Shea for his great service.

As Woodard pointed out, at this last meeting, Shea continued with his quick move to approve the consent agenda.

This action was followed by farewells and thanks from commissioners. County manager Robert L. Outten, public information officer Dorothy Hester and finance director Dave Clawson all shared brief remembrances about working with Shea.

And as appropriate, Shea moved to adjourn his last meeting.

A framed certificate of appreciation from the Board of Commissioners was presented to Shea at the start of the meeting. The certificate reads:

“It is with deep respect that today, November 19, 2018, the Dare County Board of Commissioners hereby expresses its heartfelt gratitude for the commitment and devotion of Jack Shea and will forever honor and remember his legacy as a Dare County Commissioner.”

The document is signed by Robert L. “Bob” Woodward, chairman, Dare County Board of Commissioners.