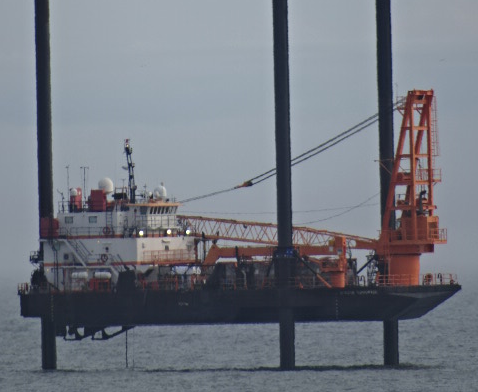 This weekend the Seacore Supporter, 132 foot liftboat anchored off the beach in Nags Head, created a fair amount of speculation. The 717 ton ship sat nearly stationary a mile offshore and was clearly visible to anyone looking seaward. Its appearance reminiscent to some of a tripod machine from the movie “War of the Worlds,” the ship had been stationary since Saturday.

In reality, the Seacore Supporter is a survey boat that was in transit from work off of Ocean City, Maryland to its home port in Louisiana when a weather forecast forced the boat to lay anchor. Joseph Orgeron, the special projects manager at Falcon Global said when the offshore forecast calls for seas in excess of six feet, the ship is forced to stop.

The liftboat lowered its 200 foot legs in preparation to spend a couple of nights “jacked up” just offshore. The ship and six man crew will ride out the passing storm front and are expected to get back underway for the Louisiana coast by Tuesday.

Orgeron said the crew has been enjoying the Outer Banks scenery, especially a view of the Wright Brothers National Monument, as they wait for the seas to subside.