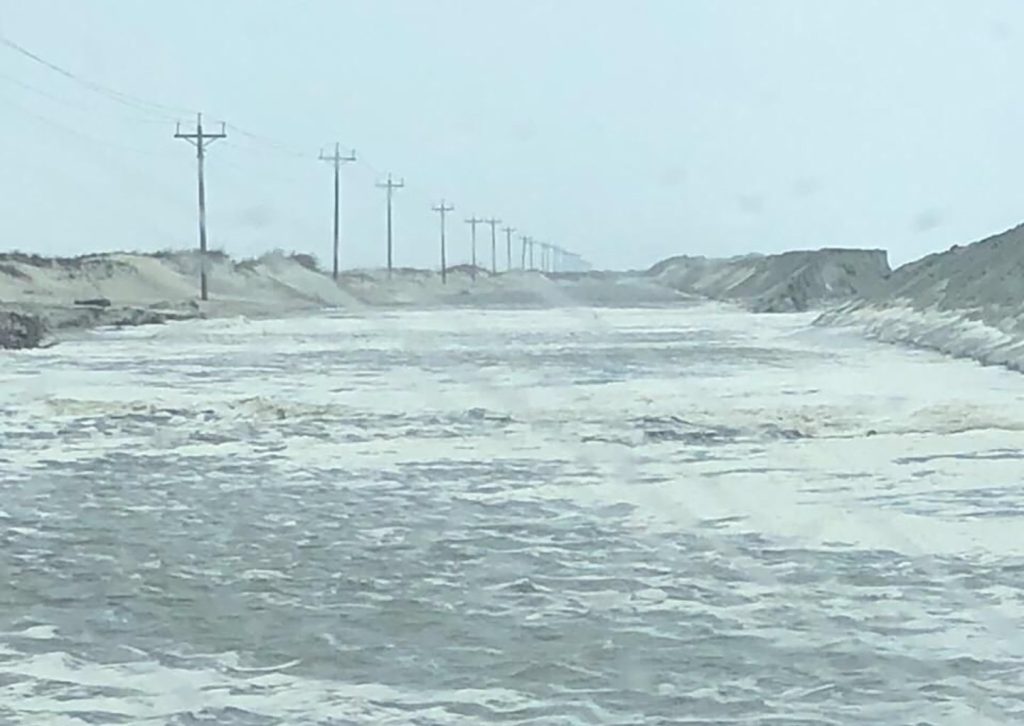 On Ocracoke, NCDOT closed NC 12 north of the Pony Pens around 10:30 a.m. due to dune breach and ocean overwash. NCDOT photo

The morning’s high tide around 9 a.m. sent salty water across NC 12 at the Pea Island refuge’s visitor center, S-curves and other spots. In north Rodanthe, the water ran to the street from the northernmost house and down Sea Gull Street and several side streets. 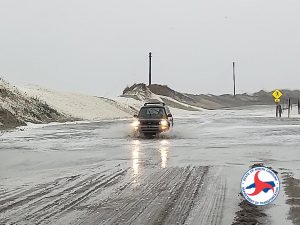 At mid-morning Monday, the Ocracoke-Hatteras ferries shut down. NCDOT closed NC 12 north of the Pony Pens around 10:30 a.m. due to dune breach and ocean overwash. NCDOT reports no known damage to infrastructure and the crew on Ocracoke was working to clear sand from roadway. Also, on Ocracoke, Hatteras Inlet water was pushing across the stack lanes to catch the ferry toward Hatteras. 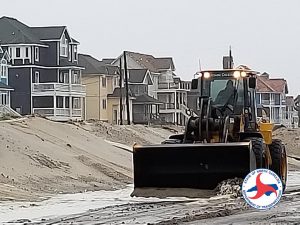 In Nags Head, the town had some “minor” overwash flooding and some cable lines down. The town said more overwash could affect South Nags Head on Monday’s high tide around 9:30 p.m.

In Kitty Hawk, NCDOT workers cleared blown sand from the roadway, which was open and passable.

Around 11 p.m. Sunday evening, Cape Hatteras Electric Cooperative staffers were called to restore power to the dock circuit in Hatteras village. The power was restored around 4 a.m. The dock circuit runs along the docks on Hatteras Harbor. A few residential units are hooked up but very few permanent residents were affected by the outage. 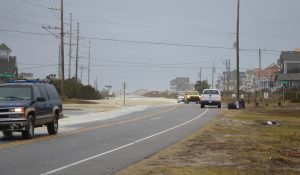 At noon on Monday, the cooperative crews were out fixing two outages in Frisco and three in Rodanthe.

The National Weather Service reports that as of 10 a.m. Monday, rainfall totals were 4.1 inches in Frisco, 2.3 in Trent Woods and 2.04 in Columbia.

Peak wind gusts measured 70 miles per hour in Ocracoke; 67 in Pamlico Sound, 63 in Duck and 61 miles per hour at Oregon Inlet, in Avon, Hatteras and Jennette’s Pier.