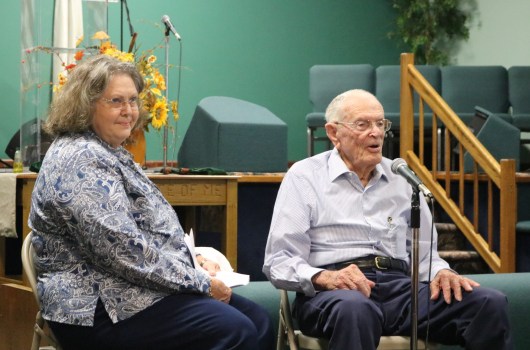 Charles Wescott of Wanchese was the guest speaker at WCA’s first quarter awards ceremony. He attended with his daughter Mary Wescott. WCA photo 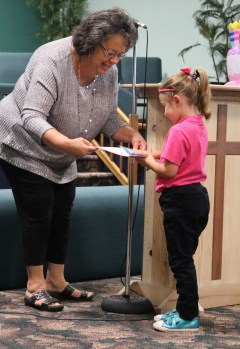 Principal Karen Hinson congratulated Ava Tisch for her academic awards in kindergarten. Tisch was later recognized by her teacher and again for her perfect attendance at WCA. WCA photo 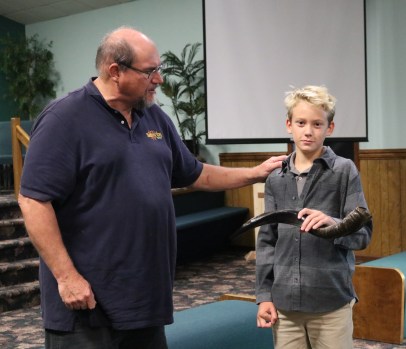 Mike Parsons visited Wanchese Christian Academy, passing the torch of the larger shofar to seventh grader Mason Daniels to blow when the congregation has been called to chapel. Daniels has been doing this congregational introduction for nearly two years. WCA photo 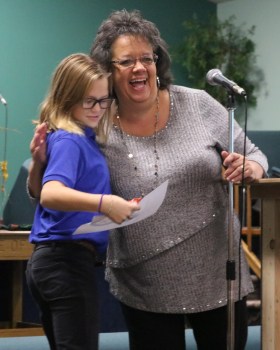 Wanchese Christian Academy recently held its first quarter awards ceremony. They welcomed Charles Wescott as their speaker for the ceremony.

A 100-year old veteran, Wescott, accompanied by his daughter Mary Wescott, congratulated students on their endeavors while encouraging them to keep up the good work.

Things are not the same in schools today as when Wescott attended. He told of walking to school – regardless of weather conditions – since second grade, the woodstoves that were in the combined grades in the Wanchese Community Building that kept them warm in the winter and one time that a clinic visited and his tonsils were removed. “No wonder kids don’t like school,” was his comment recollecting the recovery process of such an event.

Throughout his childhood, memories abound of ending days when the sun was gone or swimming great distances with childhood friends and he mentioned a consciousness of God later surrendered his life. Through many changes over the past century, he said his greatest loves were his wife and his Savior.

Concluding the awards ceremony, Wescott showed a letter he had received and framed from President Trump. While we rejoiced in his many accomplishments throughout life, he encouraged each student to better themselves in character as well as education.

Receiving awards at the ceremony were: