By Letters to the Editor 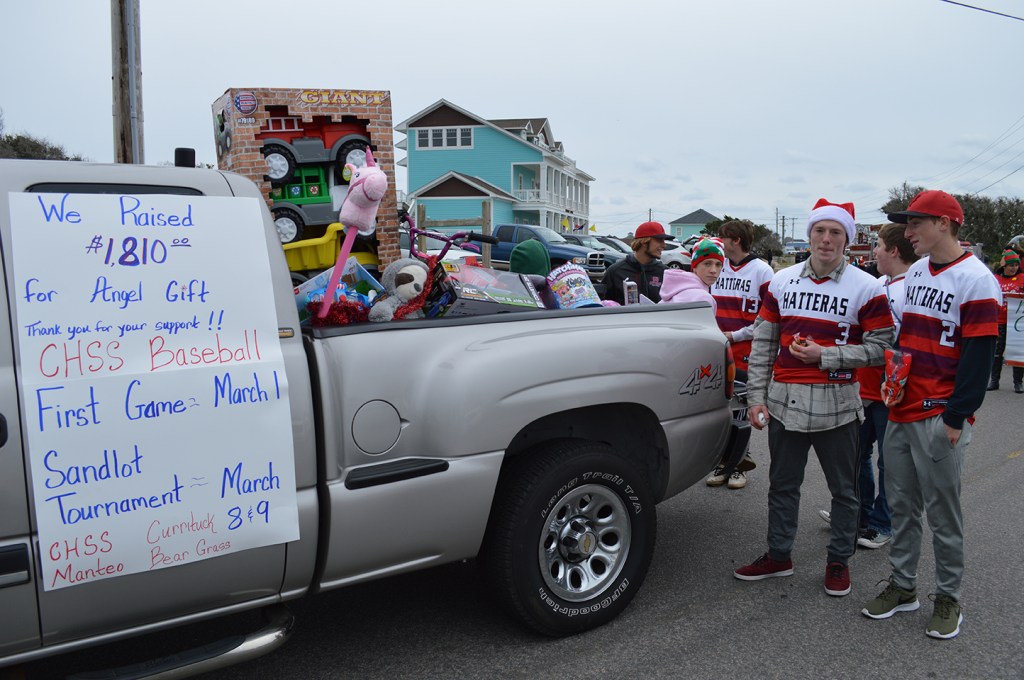 The team raffled off a $100 Wal-Mart gift card (which was donated by Wal-Mart in Kitty Hawk) with 100 percent of the proceeds going to the Hatteras Island United Methodist Church Angel Gift program.

The baseball program at Cape Hatteras got no money from this project, but the players involved reaped plenty of benefits. The players raised $1,720.06 in ticket sales and donations.

It was great to see that people were so willing to give support to this project. Jackie Poteate of Hatteras, N.C. won the drawing for this year’s gift card and elected to donate it back to the team to purchase more toys.

Sharing high salesman honors for the Hurricanes this year were Colby Day and John Canning, selling 180 tickets each to this year’s raffle.

We concluded the project on Saturday Dec. 8 by traveling to Wal-Mart in Kitty Hawk, where the players actually did the shopping for the toys. When all was said and done, the Hurricane Baseball team had purchased 156 toys valued at $1,820.06 that will brighten Christmas morning for many children.

Upon our return to Hatteras Island, team members loaded the toys in the back of Lisa Durham’s truck and rode in the annual Hatteras Village Christmas parade. After the parade, the players met at the Hatteras United Methodist Church to unload the toys and get them headed to the hands of children on Christmas morning. Over the past three years, the Hurricane Baseball program has raised over $4,100 and purchased 399 toys for children at Christmas.

It was a wonderful experience for everyone involved and it was great to see our young people working so hard for a worthy cause with no thought of reward.

It is our hope that this project will help make the Holidays a little bit brighter for some children that might not have had much to look forward to on Christmas morning. One of the goals of the Cape Hatteras Secondary Baseball Program is to help our student-athletes see the community and world around them and to help them to understand that they have a responsibility to be a positive force in the lives of other people. This project is one of the ways we encourage our student-athletes to give back to their community. This is our third year of this annual project and we are very grateful that the United Methodist Church Angel Gift program, Wal-Mart, Cape Hatteras Secondary School and the community work with us in making this project a success. If it were not for the individuals and businesses that purchase the tickets, we could not be a part of this wonderful cause.

Thank you and Merry Christmas to all.

READ MORE LETTERS TO THE EDITOR ON OUR OPINION PAGE.