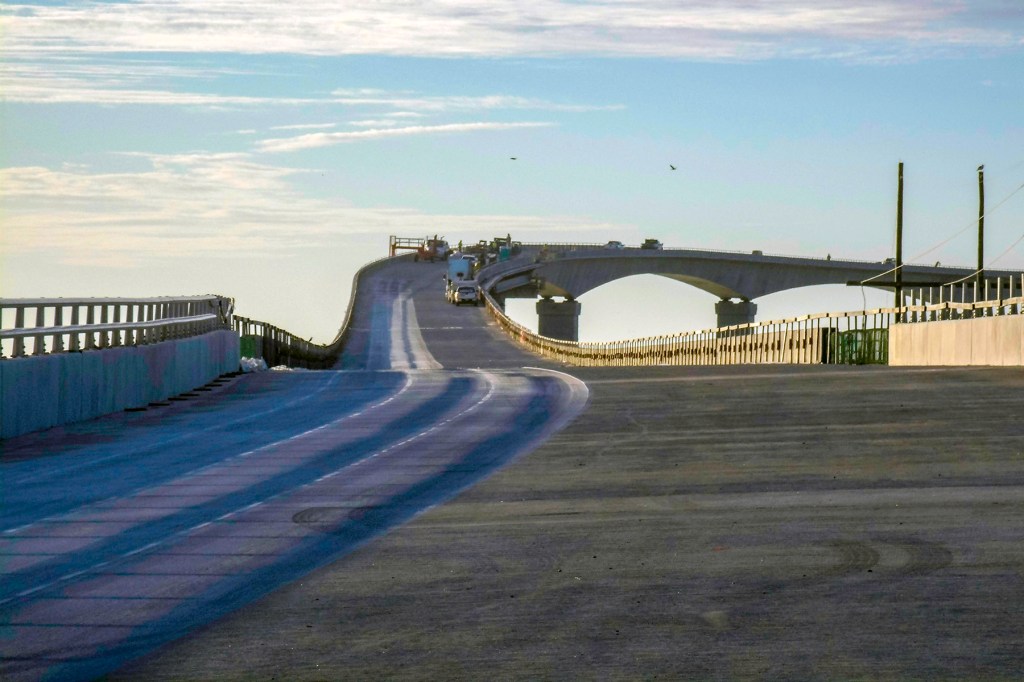 When Danny Couch looks at the almost-completed new bridge across the Oregon Inlet along North Carolina’s Outer Banks, he sees both beauty and certainty.

Beauty because of the structure itself – the new Bonner Bridge roadway will rise 90.5 feet in the air at its highest point, and the high-rise portion is 3,500 feet long. And certainty because the new bridge is replacing one that had a life expectancy of 30 years – when it was built more than 50 years ago.

“It’s probably going to end up on our county seal, along with the Wright brothers, the Lost Colony and the Cape Hatteras Lighthouse,” Couch, a Dare County commissioner who lives on Hatteras Island, said jokingly.

The bridge spans Oregon Inlet, connecting N.C. Highway 12 and Hatteras Island eventually to the mainland. It’s the only access to the island other than ferries.

The new Bonner bridge was added to the state wish list known as the State Transportation Improvement Program in 1989-1990. In July 2011, the state issued a design-build contract with construction scheduled to begin in early 2013.

But lawsuits filed by environmental groups delayed the process until those were settled in 2015. Construction finally began in March 2016, and the new bridge is scheduled to open three years later, in February or March of 2019.

The 2.8-mile-long bridge will run parallel to the existing span, which was built in 1963. Maintenance has kept the original bridge open to traffic, although it was closed for over a week in December 2013 because scour – the loss of sand around the pilings – made the bridge unsafe.

The new, $252 million bridge has a life span of 100 years, said Pablo Hernandez, the resident engineer for the district that includes the bridge. “By designing it for a 100-year service life, we are designing it for the worst case that it could experience in those 100 years,” he said.

That includes scour, hurricanes and the possibility that a dredge will hit the bridge, as one did in 1990, causing a 370-foot section to collapse. It took 3.5 months to complete repairs.

The bridge will be the first in the state to use stainless reinforcing steel, which will provide additional protection against salt-water corrosion. It also will have 8-foot shoulders, a vast improvement over the original bridge, which has no shoulders.

The new bridge originally was scheduled to open in December, but the threat of hurricanes delayed those plans, Hernandez said. Although neither Florence nor Michael caused serious damage on the Outer Banks, workers had to evacuate, and equipment had to be secured ahead of time in case they did.

Couch, a Dare County commissioner who lives on Hatteras Island, where residents depend on the bridge to take them north to the mainland, said locals are ecstatic about the new bridge. “Doctors’ appointments are a lot more certain. You can get your shopping in.”

The bridge also is important for tourism. Hatteras Island has about 6,000 rental cottages, said Couch, who’s also a real estate agent. “For every man, woman and child who lives on the island, we have almost two rental cottages,” he said. “Just what it can do to wind up our economy is important as well.”

The original bridge is getting a new life, in a way. The parts that are demolished will be added to offshore reef sites while about 1,000 feet at the south end will stay in place and be open for pedestrians.

Hernandez, who began working the state Transportation Department in 1998, has helped maintain the existing bridge since 2003. He’s been involved with the planning, design and construction of the new bridge since 2007.

When the new bridge opens, he thinks his thoughts will be with the original one, which he described as an old friend that was a large part of his engineering career.

“The old bridge, with a lot of attention and care, has been reliable and served a great need,” he said.