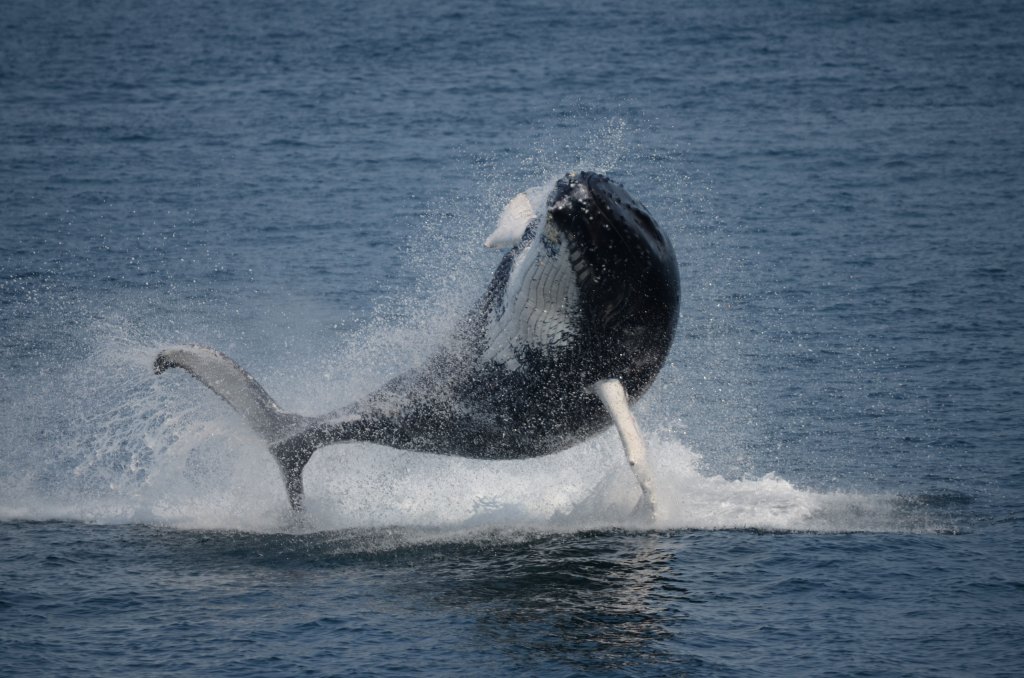 A coalition of major public aquariums has announced that they are opposed to the federal government’s pending issuance of permits to allow repeated seismic blasting along the East Coast in search of offshore oil and gas. Marine scientists are concerned that the prolonged and extreme noise pollution introduced into already highly stressed ocean environments will disturb marine life from tiny plankton to commercially valuable fish stocks and even giant whales.

“As the nation’s aquariums, it’s our duty to speak up in defense of our oceans. Now is not the time to move backwards,” said Vikki Spruill, president and CEO of the New England Aquarium. The Boston-based marine conservation organization has joined the National Aquarium in Baltimore, the Mystic Aquarium in Connecticut, the Virginia Aquarium & Marine Science Center, the North Carolina Aquariums and the New York Aquarium with its parent Wildlife Conservation Society (WCS) in opposition to NOAA’s recent affirmation of the sound blasting program from Delaware to Florida. Spruill added, “We strongly oppose the administration’s actions along the Atlantic seaboard. We stand with the 300 municipalities and 2,000 local officials who have formally opposed offshore drilling and seismic exploration.”

The North Carolina Aquariums at Fort Fisher, Pine Knoll Shores, Roanoke Island and Jennette’s Pier have all joined the coalition.

With the exception of Maine and Georgia, every governor from Florida to New Hampshire has publicly denounced the current administration’s proposal to allow offshore oil and gas exploration, development and production in the U.S. Atlantic Exclusive Economic Zone — the area within 200 miles of the U.S. coastline.

Last month, NOAA gave the green light for the Bureau of Ocean Energy Management to launch a series of seismic surveys by private companies along the Atlantic coast. These surveys use airguns that are towed behind ships and shoot loud blasts of compressed air through the water and miles into the seabed, which reflect back information about buried oil and gas deposits. Airgun surveys produce intense explosions every 9 to 11 seconds for many weeks or months at a time. All of this is undetectable to someone at the surface, but the underwater impact and disturbance from these activities can be devastating to ocean life. The explosions from seismic airgun blasts are 200 to 260 decibels in water – the equivalent of 140 to 200 decibels (dB) in air. To put that in context, a loud rock concert is about 120dB and a jet engine at 100 feet is about 140dB. 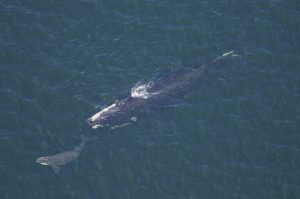 A right whale and her calf off the coast of Florida in 2010. Photo credit: Suzie Hanlan, Anderson Cabot Center for Ocean Life at the New England Aquarium. NOAA Permit #14233.

For marine mammals that depend upon sound to maintain contact with calves, locate food and find mates, seismic surveys could have an impact on critical life functions. For the most endangered large whale species, the North Atlantic right whale, aquarium experts say it will disproportionately affect the most vulnerable members of the population, mothers and calves. This past year, there were no calves born in a population of just over 400.

NOAA, which was in charge of determining whether such seismic activity would violate the Marine Mammal Protection Act, authorized “incidental harassment authorizations,” for five companies. These permits allow companies to “incidentally, but not intentionally harass marine animals.” The industry claims that the seismic surveys will have “no measurable impact on fish or marine mammal populations,” but evidence says otherwise, according to the statement from the coalition. The group also says dozens of scientific papers show that seismic exploration is detrimental to ocean life from the bottom to the top of the food chain.

NOAA’s authorization of “incidental harassment” coincides with an unprecedented three open and unresolved unusual mortality events or UME’s for large whale species along the East Coast. Over the past two years, humpback, minke and right whales have all suffered much greater than normal die-offs.  Despite 40 years of federal protections, the right whale population is declining rapidly due to entanglements in fishing gear, vessel strikes, underwater noise and other chronic stressors. “To introduce the additional major and possibly lethal stressor of seismic blasting to already beleaguered whale populations along the Atlantic seaboard is an abdication of NOAA’s responsibility for the sound management of the living marine resources in the region,” said Scott Kraus, VP and chief scientist for Marine Mammals at the New England Aquarium.

NOAA says it will limit seismic blasts from November to April in regions of the Atlantic where the right whales are known to migrate and if whales are in the vicinity, blasts will not be allowed within 56 miles of an endangered animal. Seismic noise travels hundreds of miles underwater. “Collectively, we are already extremely concerned about the fate of North Atlantic right whales and impacts from seismic surveys could prove to be the tipping point for the survival of this highly endangered whale,” said Jon Forrest Dohlin, vice president and director of WCS’s New York Aquarium. “The effects of seismic blasting on marine species are already known to be harmful, especially to acoustically sensitive marine mammals that inhabit the coastal environments of the Atlantic seaboard,” added Howard Rosenbaum, senior scientist for the New York Aquarium and director of  WCS’s Ocean Giants program.

Seismic exploration has also been shown to reduce singing in humpback whales, displace finback whales by hundreds of miles and disrupt activities vital to foraging and reproduction over vast ocean areas. In the Pacific, recent seismic noise has been linked to significant reductions in calf survival in western Pacific gray whales — another endangered baleen whale.

With five different applications approved for seismic exploration, these surveys are loud enough to impact every aspect of the marine ecosystem. A recent study shows that seismic surveys cause significant mortality events in zooplankton, the tiny animals that form the foundation of a healthy and productive ocean ecosystem. Zooplankton decline by 64 percent within 4,000 feet of seismic blasts. Because seismic surveys will take many months to complete, involving multiple vessels over the same area, there is the potential for widespread damage to ocean productivity.

“Today, the role of public aquariums expands beyond our gates. We are also research organizations and educational facilities with the responsibility to provide real and applied science to protect our oceans,” explained Katie Cubina, Senior VP for Mission Programs at the Mystic Aquarium. “We value the oceans as a public trust for future generations. There is substantial scientific evidence that seismic noise negatively affects marine life.”

– Submitted on behalf of aquarium coalition

TO READ MORE COLUMNS AND LETTERS TO THE EDITOR, CLICK HERE.