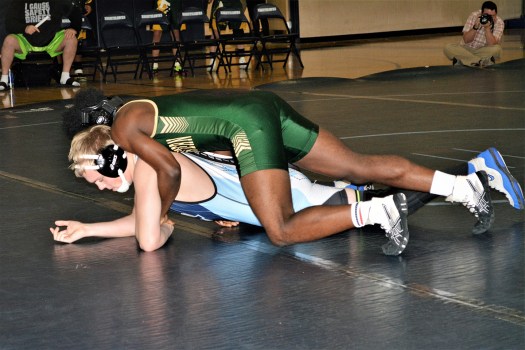 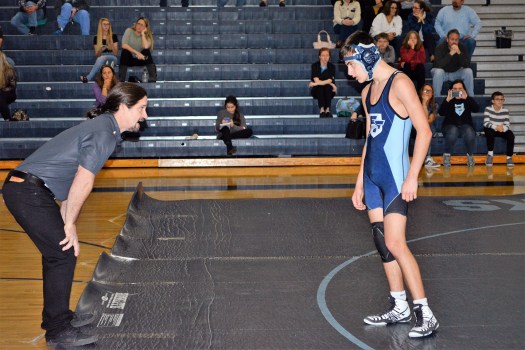 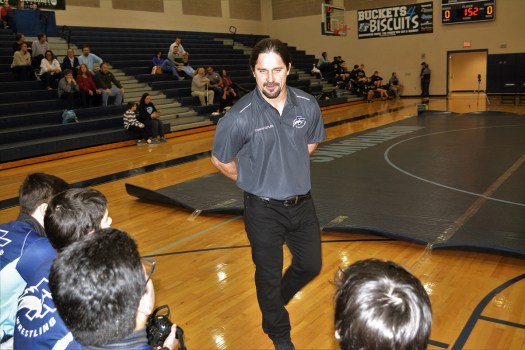 Coach Russell Kepler instructs his team on what he expects before a home meet last week: “Let’s represent! This is our house!” Daryl Law photo

Inside a small, windowless wrestling room tucked in behind the gym, a group of determined young athletes strive to continue the legacy – three state champions were forged here in the past several years.

With those wrestlers gone, this should be a rebuilding year for the First Flight program but instead, the Nighthawks have melded into a competitive wrestling squad.

With a team dual record of 6-3 heading into Thursday’s home tri-meet against Currituck and Pasquotank, the ’Hawks are looking for a great showing before they head into this weekend’s Northeastern Coastal Conference tournament at Northeastern High School in Elizabeth City Saturday and Sunday, Jan. 19-20.

From 6 foot 6 senior heavyweight John Pharr to freshman Blake Francis competing in the 126 weight class and everyone in between, Kepler said all of the tough workouts, rigorous practices and lessons on the mats have produced solid wrestlers.

“Everything is going great, we’re totally excited and the kids are humble and so eager to learn it makes my job fun,” he said. “Coach [Jay] Hawes and I wanted to use this as a learning year but they’ve gone past our expectations.

“Yes, we’re a young team,” Kepler added. “But we’ve got a great nucleus for a great future.”

Coach Kepler invites everyone to come and see his guys compete tomorrow, Thursday, Jan. 16, at 5 p.m. He thinks folks will be impressed by these young athletes who are competing in their final home meet of the season. 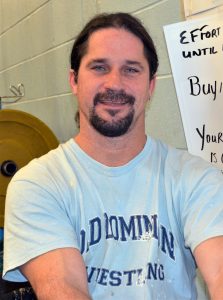 “We would really like the support of the community,” the coach said. “The guys have a lot of pride in representing First Flight so get out and support these young men.”

In their last outing this past weekend at the Fred Diem – Scott Miles Memorial Round Robin Tournament on Virginia’s Eastern Shore, First Flight placed third out of 10 teams. The guys got to wrestle in seven matches each, Kepler said.

Kepler was quick to point out that Pharr is having a heck of a year.

“He’s a senior this year and he’s got a lot of experience, plus he doesn’t want to lose,” the coach said with a grin.

And then there’s Francis, whose dad Shane was a state champion at Manteo.

As for Hawbaker, he has racked up a 22-5 record competing in the 145 weight class.

“Jack’s a freshman and he’s got some experience to learn,” the coach said.

Against Northeastern in the home match last week, Hawbaker was pinned at the end of a tough bout against two-time state placer, Jonathan Ward.

“Ward’s a tough wrestler; he was fifth in the state last year, and seventh place the year before,” Kepler said. First Flight lost that match 40-36 but easily defeated Manteo that night, 51-24. Kepler said they have two weight classes open, 138 and 220, forcing them to forfeit those points every match.

The Nighthawks have two more team dual meets after the tournament; both are away, Kepler said.