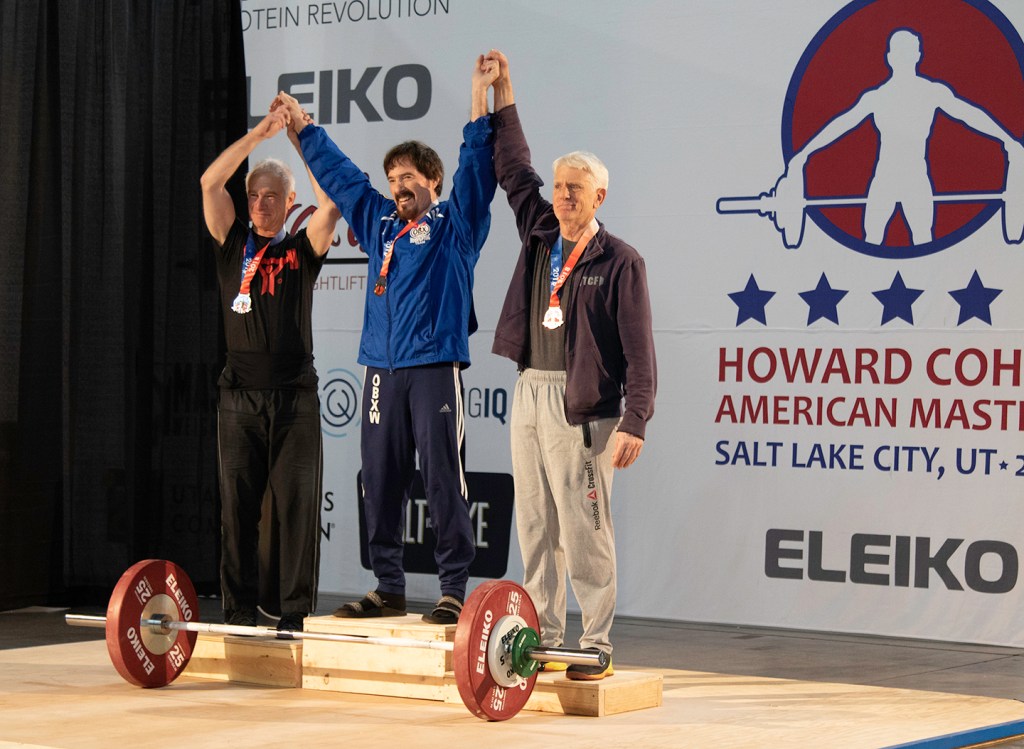 2018 was a good year for Baum Center athlete Art Donahoe. Donahoe started off the year with gold medals in both the national and Pan American Masters Weightlifting Championships.  November found Coach Art, a Roanoke Island resident, in Barcelona, Spain, for the Masters World meet. As the defending silver medalist, Donahoe brought some street cred, but the five-man field included the reigning world champ in France’s Roland Chavigny and a newcomer from Finland, Kari Tarkiainen, who had posted impressive numbers at the European championships. During the two-hands snatch, Donahoe made lifts of 59 and 61 kilograms, good for third place. The Finn went three-for-three with a best of 71 kg. Chavigny also went three-for-three, finishing with 80 kg and a commanding 9 kilo lead.

In the clean and jerk, Donahoe managed a 77 and 80, for a 141 total. Tarkiainen made only his opener of 81, but had a total of 152. The Frenchman, who needed a lift of only 73 to win his third consecutive world gold medal, was preparing to open with 90. The scoreboard changed, indicating an opener of 95; then changed once more, now showing a first lift of 100 kilograms. Chavigny, who lifted for France in the 1976 Olympic Games, took the platform and proceeded, on all three attempts, to miss. 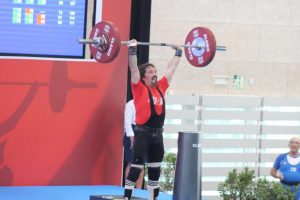 With no success in the C&J, Chavigny was unable to register and total and therefore was eliminated from the competition. The remaining lifters were all moved up one place, giving Art Donahoe the silver medal, following Tarkiainen’s gold and the USA’s Clarke Holland finished with the bronze, leaving Donahoe to say, “Sometimes you’re better off being lucky than good.”

After the world championships. the International Weightlifting Federation instituted new weight classes. Donahoe had been competing at 77 kg, but that class was eliminated, giving him the choices of 81 or 73 kg. “Even with a weight gain, I didn’t think I could be competitive at the higher weight, so I got tough on my diet, hit Jumpmasters Trampoline Park for some cardio and lost the 9-plus pounds.” The Howard Cohen American Masters tournament was the goal and that meet was in Salt Lake City in December.

Due to the new weight classes, all winning lifts would be national records, so Coach Art jumped on that bandwagon, snatched 58 kilos for the lead and went into the record books. In the clean and jerk, Donahoe made good with a 74 kilo lift, but that was 2 kg less than Nick Weingarten, who was given the record in that lift. The duo tied in the total with 132. In weightlifting, the first tie-breaker is the athlete with the heavier snatch, and with that, Donahoe had his second national record for the total and the gold medal for first place.

The 2019 season begins in March, again in Salt Lake, with the national championships. Donahoe will follow the same schedule of meets for the season, and hopes for continued success. Entering his final year in the 65-69 year-old group, Donahoe feels he’s “doing pretty good for an old man and having an awful lot of fun.”