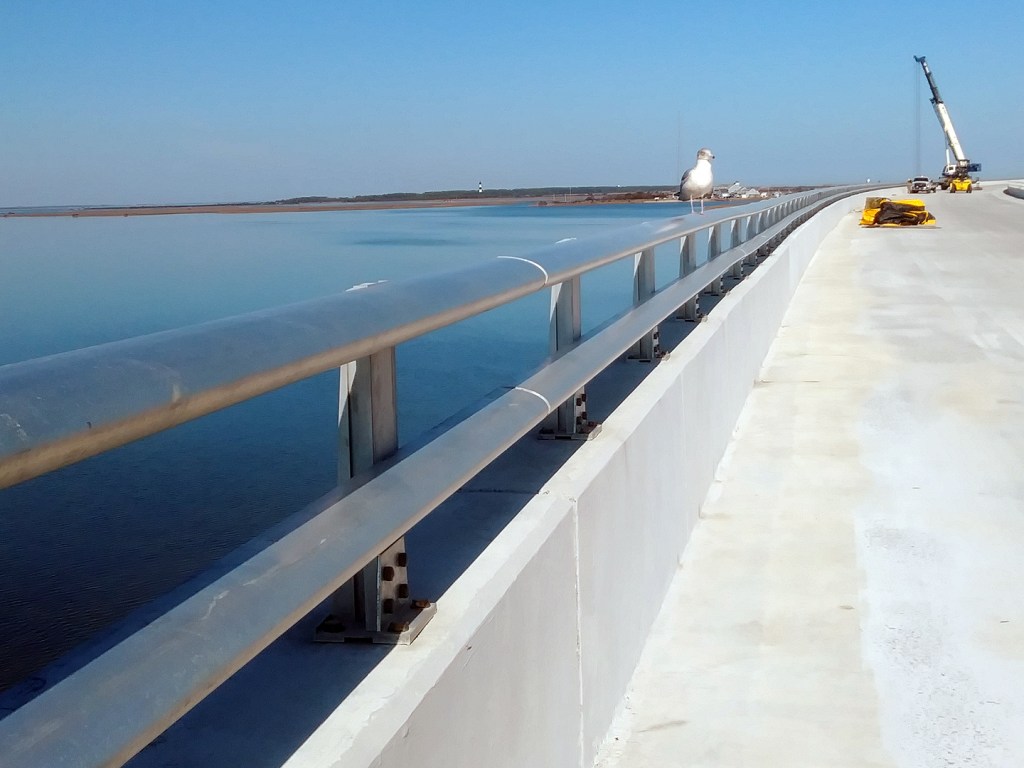 A seagull perches atop the railing on the new bridge over Oregon Inlet. Bodie Island Lighthouse is in the background. Theresa Schneider photo

We are sure that we aren’t the only ones eager to check out the new Herbert C. Bonner Bridge. A Community Day has been set and Saturday, at long last, those interested will have the chance to set foot on the new span.

Whether in person, on the telephone or via social media, the buzz over the replacement bridge has been going strong since before construction even began nearly three years ago in March 2016. Delayed by budget issues and lawsuits for years, once the construction finally began, it has held the attention of those far and wide.

Often referred to as a lifeline, the Bonner bridge connects Pea Island to the north and Hatteras Island to the south over Oregon Inlet. There have been several times the bridge has been “out,” so to speak, and cut Hatteras villages off from the rest of the county. For us, the most memorable of those incidents was likely the dredge collision in October 1990 that caused major damage and made access to Hatteras possible only by ferry, boat or air for months.

While the current bridge has been given very low structural integrity scores, it is monitored regularly and still considered safe to drive on. It has also far surpassed its designed lifespan. Originally opened in 1963, the bridge was meant to last 30 years. Here it is, 56 years later, and the span still gets heavy use from residents and tourists alike. Parts of the current Bonner bridge will remain – some to be used as a fishing pier, others to be fashioned into offshore artificial reefs.

So for all of you who, like us, have been waiting for the new Bonner bridge to open, now is your chance. Saturday’s Community Day will include a brief ceremony and wreath blessing and then walkers, runners and cyclists will be able to traverse Oregon Inlet on fresh pavement and experience what is sure to be a breathtaking view. Forecasts are calling for cold temperatures, so show up prepared with weather-appropriate clothing. The ceremony starts at 10 a.m. and the bridge will be open to pedestrian traffic until 4 p.m. This isn’t an everyday opportunity, so we encourage to go and check it out while you can.