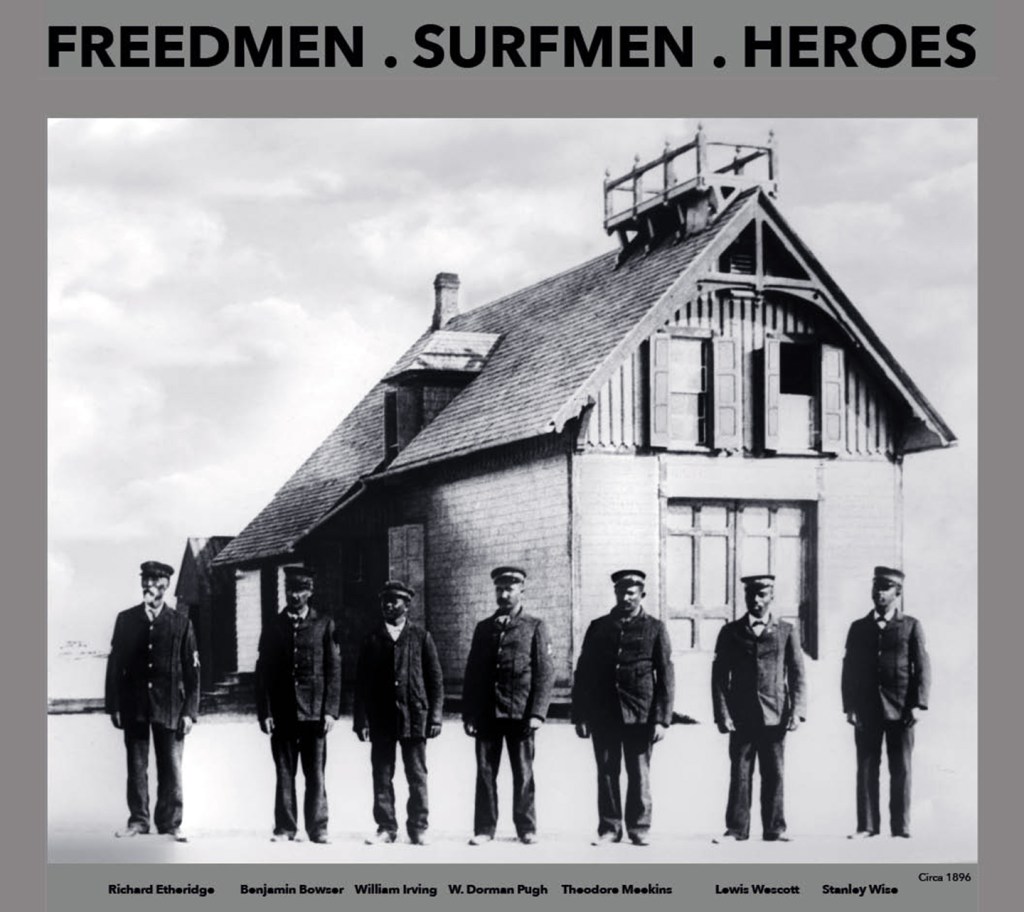 By popular demand, the Pea Island Preservation Society returns to the North Carolina Aquarium at Roanoke Island during Black History Month for the live presentation “Freedmen, Surfmen, Heroes: The Unique Story of Richard Etheridge and the Pea Island Life-Savers.” This presentation, a must-see for those interested in knowing the history of Richard Etheridge and Station Pea Island, is about a part of Outer Banks history that is continuing to gain more attention, as most recently evidenced by the new Captain Richard Etheridge Bridge dedicated on Hatteras Island last year where the station once stood. The Freedmen, Surfmen, Heroes presentation was presented to a packed audience at the dedication ceremony, where it received rave reviews.

Etheridge, a slave who grew up on Roanoke Island and was taught to read and write, was the nation’s first African American keeper of a US Life-Saving Service station and Station Pea Island, the only in the history of the service with black keepers and surfmen for most of its existence. The story of Etheridge and Station Pea Island, occurring during the time of slavery, reconstruction and lynching in the South, is a remarkable story, one which fittingly represents why celebrating Black History is so important.

The live presentation, presented by a four member team of the Pea Island Preservation Society, teaches this history in an exciting and fun-filled way. Using vivid imagery, reenactment and interpretation, the presenters teach the story of Etheridge’s life and the events that led to his freedom, the role surfmen played in helping to saving lives and the station’s most famous rescue — the heroic rescue of the nine-member crew of schooner E.S. Newman during hurricane conditions along the North Carolina coast on October 11, 1896. The live presentation also teaches important lessons about the unity the all-black station formed with neighboring all-white stations and how black and white surfmen worked together at an unexpected time in the nation’s history to together save lives.

Two of the presenters, Darrell Collins and Joan Collins – first cousins who both who live on Roanoke Island – are descendants of the Pea Island Life-Savers. Having had family members who served at the station under Etheridge when he took command in 1880 and until the station closed in 1947, their personal perspective and knowledge serves as a reminder of why teaching this story of Etheridge and Station Pea Island is so important to the community and beyond. The other presenters, James Charlet and Linda Molloy – known historical interpreters in the area who present in costumed dress representative of the period Etheridge lived – help bring the history to life.

This dynamic four member team has been presenting the live program to enthusiastic audiences at the aquarium and other locations in the community since February 2016. For the last two years, the group has also been presenting the program to fourth graders at all Dare County elementary schools. Last year, the society received a grant of nearly $30,000 from the Outer Banks Community Foundation to help continue to educate the community and beyond.

Darrell Collins, who serves as the president of the Pea Island Preservation Society, says “We are excited to return to the aquarium for Black History Month this year and we have also arranged to present there again this summer. It is important for everyone to know the roles African Americans have played in the community, especially in a community like ours that is not as diverse as other parts of the country.” Joan Collins, the driving force and creator of the live presentation says, “Although the story of Richard Etheridge and Station Pea Island is undoubtedly an important part of the nation’s history, unfortunately it has been overshadowed by other historical events that occurred here. Hopefully, we are helping to change this.”