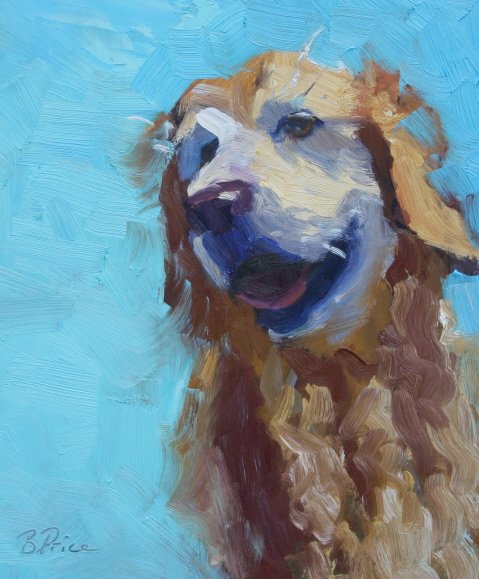 Brad Price especially gifted in canine portraiture and has turned his talent into a successful business. It was his aging Golden Retriever who served as his first model.

Brad Price will show his oil paintings for the months of February and March at the Unitarian Universalist Congregation meetinghouse.

Born in Hampton Roads, Price has called the Outer Banks home since 1991. He has been painting since 2007, when he was inspired to pick up a paint brush to combat the winter doldrums. At a painting workshop, Price discovered that he had a true talent and passion for the art form. He quickly realized that painting was not just a winter hobby, but a vibrant and satisfying form of self-expression. Over the past eight years, he has expanded on the skills he learned at that workshop and developed a versatile and engaging style.

He is especially gifted in canine portraiture and has turned his talent into a successful business. It was his aging Golden Retriever who served as his first model. Price realized that the canvas was the perfect place to capture his love for his pet and he was amazed by how powerfully the painting represented his best friend’s unique personality. To this day, the portrait of Isaac is Price’s favorite painting.

Also a talented chef, Price graduated from the Florida Culinary School of the Arts. He was executive chef at Elizabeth’s Café in Duck for 17 years. Since the restaurant closed, Price has been able to study with several teachers and now teaches oil painting classes to local aspiring artists in his studio, Hang Twelve, in Seagate North Shopping Center in Kill Devil Hills.

The UUCOB meetinghouse is located at 831 Herbert Perry Road at the corner of Kitty Hawk Road.