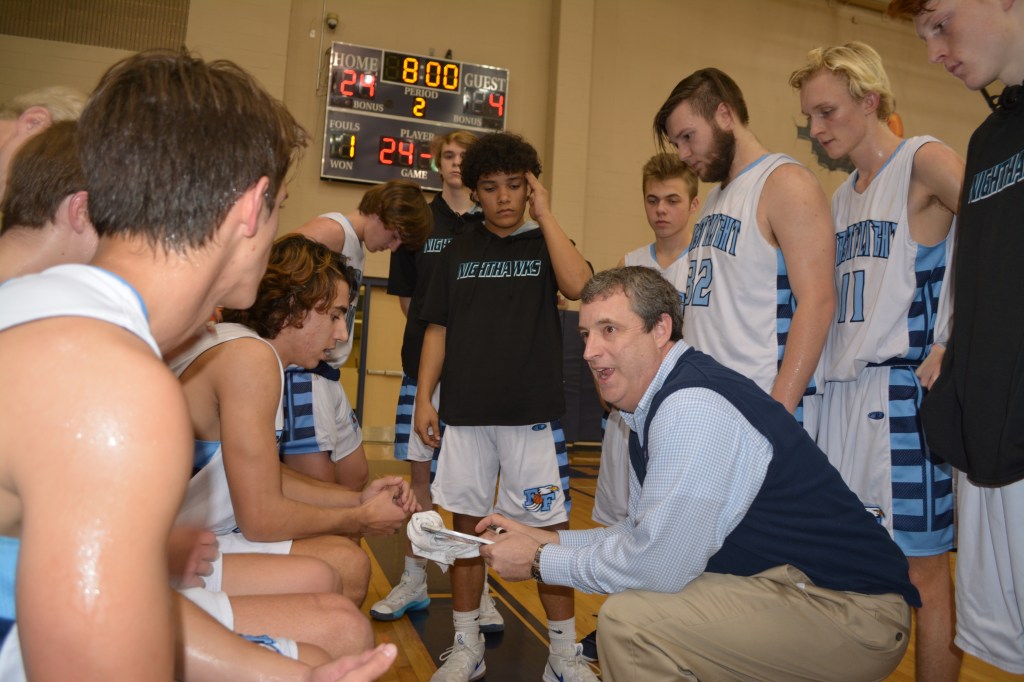 First Flight Nighthawks coach Chad Williams gives his guys directions at the end of the first quarter after the team jumped out to a 24 to 4 lead on the visiting Currituck Knights. The 'Hawks went on to win 72 to 27. They'll play again Feb. 20 at Hertford against the winner of a first round match up between Bertie, Pasquotank. Daryl Law photo

They’ve already split games with conference leading Hertford as well as Bertie who is in third place. It’s been a heck of a year for the Nighthawks who battled some bigtime non-conference teams early in the season to get their level of play up a few notches. 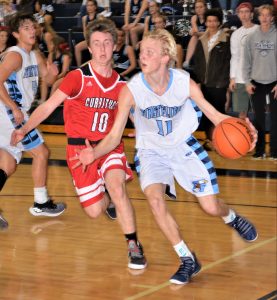 Now, they’re ready for action and this week’s conference tournament may just be theirs for the taking. They’ve finished second something they’ve never accomplished before.

“We’re hoping to be there Friday night in Elizabeth City,” the coach said. “We’ve beaten everyone (in conference).”

First, tonight at Hertford they’ll take on the winner of the Bertie, Pasquotank game from Tuesday’s first round. If they win, it’s likely they’ll face 9-1 Hertford County in the championship game set for Friday night, Feb. 22.

The Nighthawks use a somewhat unique attack and solid defense to win games. Heading into the conference tournament they were 16-8 overall and 8-2 in conference. Simply put, they shoot and make a ton of three balls.

In fact, according to online high school sports website MaxPreps, First Flight is leading the state in number of made three with 327 and they average 13.6 made three per game. 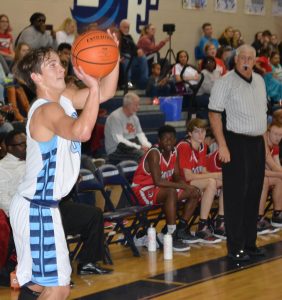 Senior Reese Jones had 92 heading into the tournament just edging out junior Dylan Blake with 91. Jordan High had 57 and Grayson Bell, 35. As for scoring averages, Blake leads that column with 22.5 points per game, Jones and High average 16 each and the trio is leading the conference as the three top scorers.

But it takes a total team effort to win these games and Williams has other solid players who “contribute in different ways.”

In fact, he says the entire team is legit.

“We can step out on the floor and compete at any level,” he said Monday night.

Last Friday, the ’Hawks easily downed the Currituck Knights in a lop-sided 72-27 victory on Senior Night.

In the second quarter, Blake sank five long range threes and added a sixth early in the third to give him 18 points. Williams subbed early and often letting everyone on the team get minutes and score too.

“That was a solid half of basketball,” said First Flight fan Wright Emory.

“He’s just a player who blossomed in the system we’re running,” he said. “He runs the floor well and shoots well.”

Coach Williams has been at the helm of the program since its inception when First Flight opened its doors for the 2005-2006 school year. They had some success early on but he believes his club is better prepared to claim the tournament championship this Friday.

Forecasters say his shooters will make it rain. 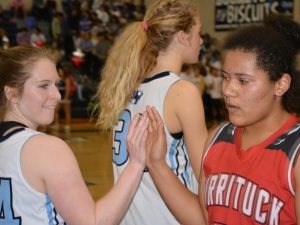 First Flight senior Ceilidh Mclean, left, gives a high five to Currituck sophomore Marissa Moyle after the Nighthawks staged a gutsy, 59 to 52 comeback victory on Senior Night Friday. Mclean and her teammates were scheduled to face Northeastern at Currituck in the first round of the conference playoffs on Tuesday Feb. 19. Daryl Law photo