Eat and run: Bear gets a ride from Dare transfer station 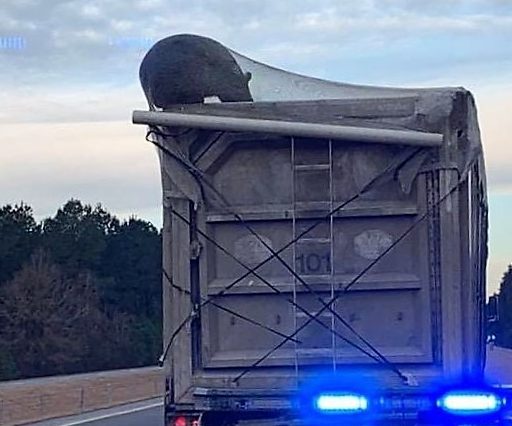 Last week a black bear hitched a ride on a garbage truck. The bear apparently had crawled under a tarp on the truck at the Dare County transfer station located in Manns Harbor. Unnoticed by the driver, the bear traveled nearly 90 miles before jumping off.

Stacey Bowen, owner and vice president of the trucking company that hauls garbage from Dare County to a landfill in Bertie County, said the driver had no idea he was hauling more than waste until a deputy spotted the bear riding atop the truck and pulled him over.

trucks at the Dare mainland transfer station but “normally they pop out like popcorn” when a driver hooks up to haul the trash away. He added, “garbage – bears are attracted to it like a magnet, like a big dinner bell.”

There are an estimated 300 to 400 bears that inhabit the federally protected Alligator River National Wildlife Refuge that surrounds the Dare transfer station. A spokesperson for Dare County Public Works said the bears have presented a problem. They like to get into the transfer station, tear up property and can be destructive.

The bear that hitched the ride on the truck has become a bit of a media sensation. Pictures of the unwanted hitchhiker have been shared on social media and garnered lots of press attention. Bowen chuckled and said he has been getting emails and text messages since the picture went viral.

The bear was last seen scampering into the woods near the landfill in Windsor after it jumped from the truck.

Somerset Place presents ‘Made from Off the Land’ exhibit