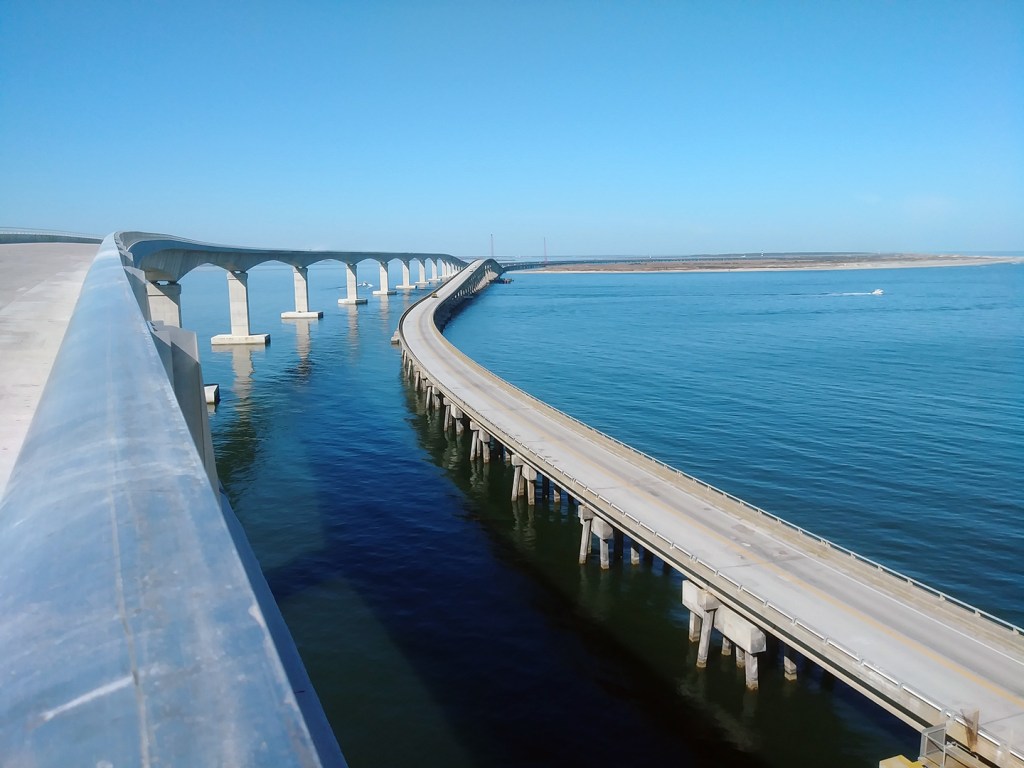 The new bridge over Oregon Inlet, left, has drawn some controversy over a potential name change. Theresa Schneider photo

Controversy about naming the new bridge over Oregon Inlet spilled into the Dare County Board of Commissioners meeting Tuesday evening, Feb. 19.

By Friday that week, Jayson Collier from Frisco had launched at Facebook page called “KEEP It Bonner.” The Facebook page “was set up to give voice to the 5,000+ year-round residents of Hatteras Island, for which the bridge serves as a lifeline to the mainland, and who wish not to have it renamed the Marc Basnight Bridge.”

On Tuesday, Hatteras Islanders jammed the Fessenden Center Annex, at the junction of NC 12 and Buxton Back Road. One count put the number at 27 with more arriving.

Seven people spoke during public comment. The theme was Hatteras Island voices were not heard in the decision to rename the bridge over Oregon Inlet.

Collier said “you got this wrong.”

One of the issues was the poll posted on the Dare County website. That poll put the Basnight name in first place. Two commissioners based their votes for Basnight on that poll.

Linda Browning, also from Frisco, disputed the distribution and outcome of the Dare County website poll. Other polls on media outlets had a many more total votes and much support for keeping the name Herbert C. Bonner Bridge.

“It’s a one way line,” said Browning. She asked the board to rescind its petition for naming the new bridge for Basnight and resubmit an application to move the Bonner name to the new bridge.

Rick Shaftan from Rodanthe told the commissioners that a real disconnect exists between Hatteras Island and the rest of the county. “Keep Bonner Bridge,” said Shaftan.

Board chairman Robert L. Woodard chose to respond to the strong comments. “I feel obligated to address your concerns,” of not listening to your voice, treating Hatteras Island like a stepchild, and notices not being sent out.

Woodard showed copies of the email notice and media stories about the county poll. He objected to the stepchild reference. He also pointed to the video system installed so that Hatteras Islanders could make public comment.

During Woodard’s response, the fired-up crowd talked back and shouted at the television monitor. The microphone was not activated.

Dare County submitted the application on Feb. 4 to Jerry Jennings, NCDOT Division 1 engineer. The cover letter indicates the 3-2 vote by the Dare commissioners. Attached to the application are four documents: resolutions in support of naming the new bridge for Basnight from the Towns of Manteo, Nags Head and Kill Devil Hills. A resolution is also attached from the Southern Albemarle Association, which represents counties of Beaufort, Dare, Hyde, Martin, Tyrrell and Washington.

The application answers “Yes” to the question “Does the proposed naming have strong local support?” The question says “unanimous resolutions from the local governments with jurisdiction, passed in a public forum, will be required.”

On Feb. 6, the N.C. Board of Transportation’s Road, Bridge and Ferry naming committee recommended naming the new bridge over Oregon Inlet the “Marc Basnight Bridge.”

The full Board of Transportation will vote on the recommendation at its next monthly meeting March 7.

The Facebook page KEEP It Bonner is urging people to write to Gov. Roy Cooper and Michael S. Fox, chairman of the state’s Board of Transportation, objecting to the Basnight naming.

On July 15, 1983, NC Highway 12 from Whalebone Junction through Ocracoke was named the Marc Basnight Highway. If the bridge is named for Basnight, the highway designation would be rescinded.