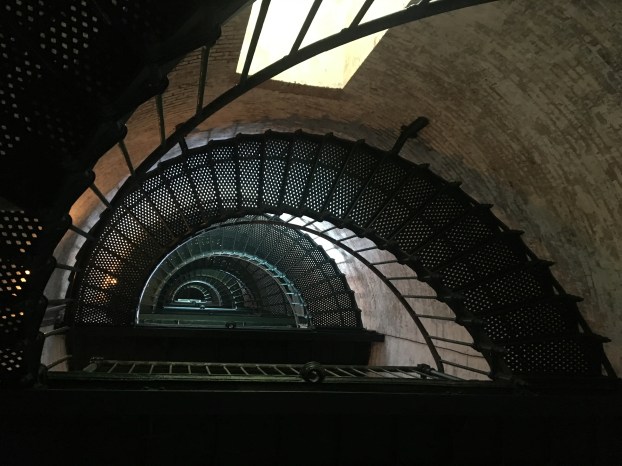 On Saturday, March 16, the Currituck Beach Light Station will host its annual free climb for its opening day.

Visitors can climb 220 (214 interior, six exterior) stairs to the top for a breathtaking view of the Atlantic Ocean, Currituck Sound and the Outer Banks while learning from docents and museum-quality exhibits about shipwrecks, the lives of lighthouse keepers and the original first order Fresnel lens.

The light station is located in Historic Corolla next to the Historic Corolla Park, home to Historic Whalehead and the Outer Banks Center for Wildlife Education. Public beach and sound access are both within walking distance of the tower.

On December 1, 1875, the beacon of the Currituck Beach Lighthouse filled the remaining “dark space” on the coast between the Cape Henry Lighthouse in Virginia and Bodie Island Lighthouse (which is an architectural twin). To distinguish the 162’ tall lighthouse from others, its exterior was left unpainted, which conveys a sense of the multitude of bricks used to build it.

This December 1 will be the last day of the season, the celebration of 144 years of light, another free, climb day so mark your calendars.

The cost to climb the lighthouse is $10; children seven and under climb for free with constant adult supervision. Season passes are available and they are also accepted at Island Farm on Roanoke Island.

During June, July and August, the lighthouse will remain open on Wednesday and Thursday evenings until 8 p.m.

All are invited to enjoy and climb.

When Manteo commissioners decided to tape and televise their public meetings, the expressed opinion of the commissioners was to record... read more