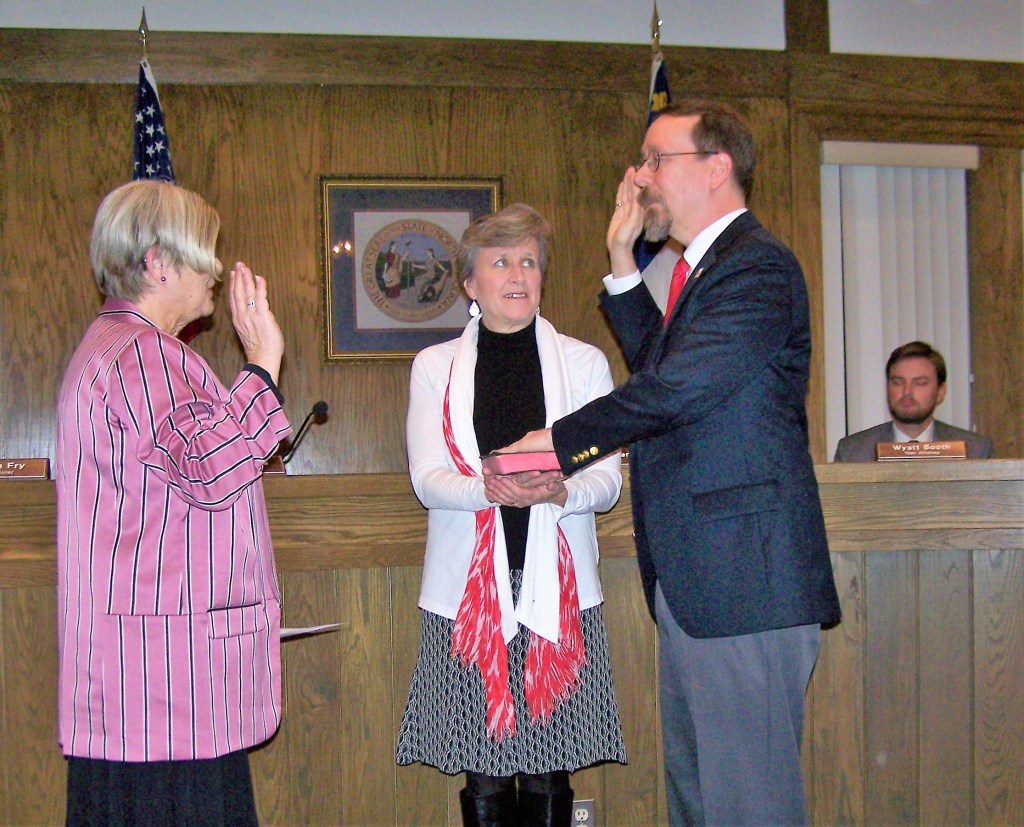 Manteo’s new town manager James Ayers, with his wife Elise at his side, is administered the oath of office by municipal clerk Becky Breiholz. The ceremonial oath was administered at the beginning of the March 6 board meeting. Ayers replaced the retiring town manager and was hired in January from a field of 40 applicants. Gregory Clark photo

When Manteo commissioners decided to tape and televise their public meetings, the expressed opinion of the commissioners was to record most town meetings, including the monthly Board of Commissioners, commissioner workshop, Planning Board and Architectural Review Committee meetings.

Last Wednesday night, with cameras rolling, the board decided to take a scaled back schedule, opting instead to tape and rebroadcast only the regular scheduled Board of Commissioners meeting on the first Wednesday of each month.

Commissioner Eddie Mann, who ran on and was the driving force behind having Manteo televise meetings, made the motion for the limited TV schedule. He made the motion after board discussion indicating that, although they were starting with filming only one meeting per month, other meetings could be added as the town became more familiar with the process.

During discussion, commissioner Richie Burke said he would like to see the board’s workshop meeting added to the schedule as soon as possible. Mayor Bobby Owens wants the planning board meetings added. Commissioner Christine Walker said, “maybe after we get the hang of it, we can add meetings.”

A tentative schedule has been set to rebroadcast the Manteo Board of Commissioners meeting a week after the meeting takes place. It is possible the edited version of the March 6 meeting will be available Wednesday, March 13 and Friday, March 15 at 1 p.m. and 7 p.m. on the Current TV government channel (191) and online at currenttv.org.

The hope is to also to make the video available on the Town of Manteo website.