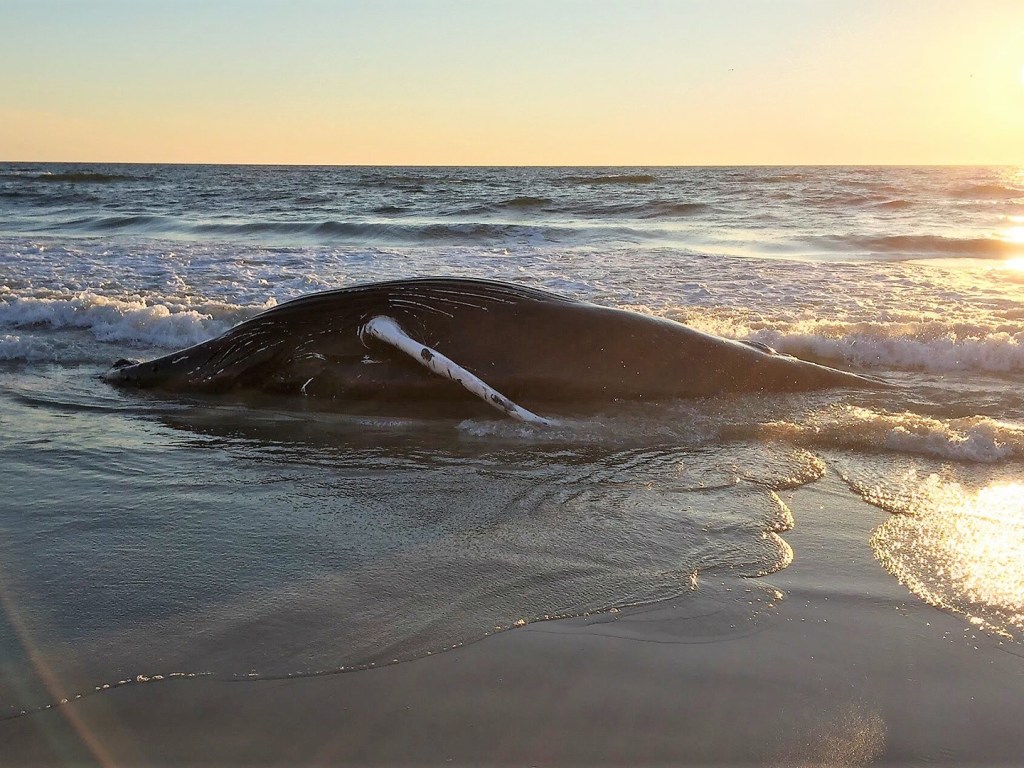 This latest whale was estimated to be seven to eight meters (22-26 feet) in length. Teams from the OBX Marine Mammal Stranding Network and University of North Carolina Wilmington were taking samples and expected to perform a necropsy to help understand what killed the whale. NOAA Fisheries, the agency that tracks marine mammal strandings, states that since January 2016, elevated humpback whale mortality has occurred along the Atlantic coast from Maine through Florida.

As their numbers have grown, most populations of humpback whales have been removed from the list of endangered species, but are still protected by the Marine Mammal Protection Act. Humpbacks face a number of dangers, including entrapment in fishing nets and being struck by large vessels. Necropsy results on a humpback that washed up in Corolla in February showed signs of trauma probable caused by a vessel strike. 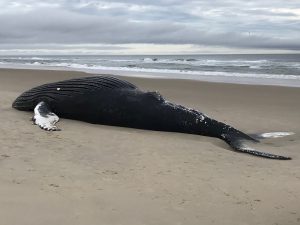 This humpback whale, found in Corolla in February, was about 33ft long, and based on size, he was estimated to be around 3-4 years old. He was slightly decomposed already. There was nothing conclusive externally, but some internal bruising was seen during the necropsy that could indicate blunt force trauma. The whale was buried onsite after the necropsy. Courtesy Jennette’s Pier

The elevated number of humpback strandings along the Outer Banks this year is concerning, said Marissa Bijarro of the Outer Banks Center for Wildlife Education, but not enough to set off alarm bells – at least not yet. In a normal year, two or three dead humpbacks are discovered locally. Although not alarmed, “we are keeping an eye on it as we try to figure out what’s going on,” added Bijarro.

Karen Clark, program coordinator at the Outer Banks Center for Wildlife Education in Corolla, explained that although the recent standings are higher than they would normally expect, it is too early to say if the deaths have been caused by a common link. Humpback whales – especially juveniles – are known to linger off the North Carolina coast in the fall and winter, while the more mature whales migrate south toward the Caribbean. 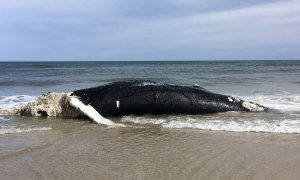 Since many species of marine mammals winter in the ocean off the Outer Banks, wildlife officials say it isn’t unusual to find a sick or dead animal beached. In addition to the recent humpback strandings, other whale species including at least two dead dwarf sperm whales and a pygmy sperm whale have been found this year. Also since late February, a number of dead harbor porpoises and bottlenose dolphins have been discovered on area beaches. Clark says that although the numbers of porpoise strandings are also higher than in recent years, it doesn’t indicate a more ominous problem. She called the strandings seasonally appropriate. 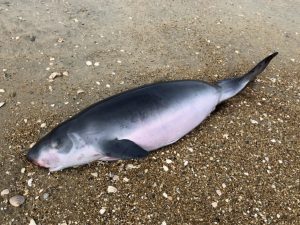 One species that is often reported to the stranding network are seals, but unlike the whales and dolphins, seals are generally in good health. The seals, especially young pups, will come ashore to nap and sunbathe between foraging trips. Bijarro says people should keep their distance because the seals can transmit disease to humans and “they bite.”

Wildlife officials say when a dead whale or other marine mammal is found beached or stranded, the first thing a person should do is notify the Marine Mammal Stranding Network or other authorities. It’s suggested if the stranded animal is alive, people should not approach or attempt to re-float it. Injured and sick marine mammals will often re-strand themselves. Instead, they should wait for an expert to arrive. The expert will determine if the animal can be rescued.

To report a marine mammal stranding in Currituck, Dare and Hyde counties, call the OBX Marine Mammal Stranding Network at 252-455-9654. Those located within the Cape Hatteras National Seashore may also call 252-216-6892. 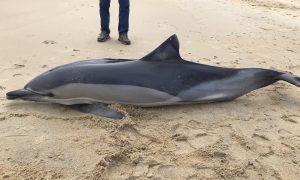 Oregon Inlet: ‘It needs a jetty’