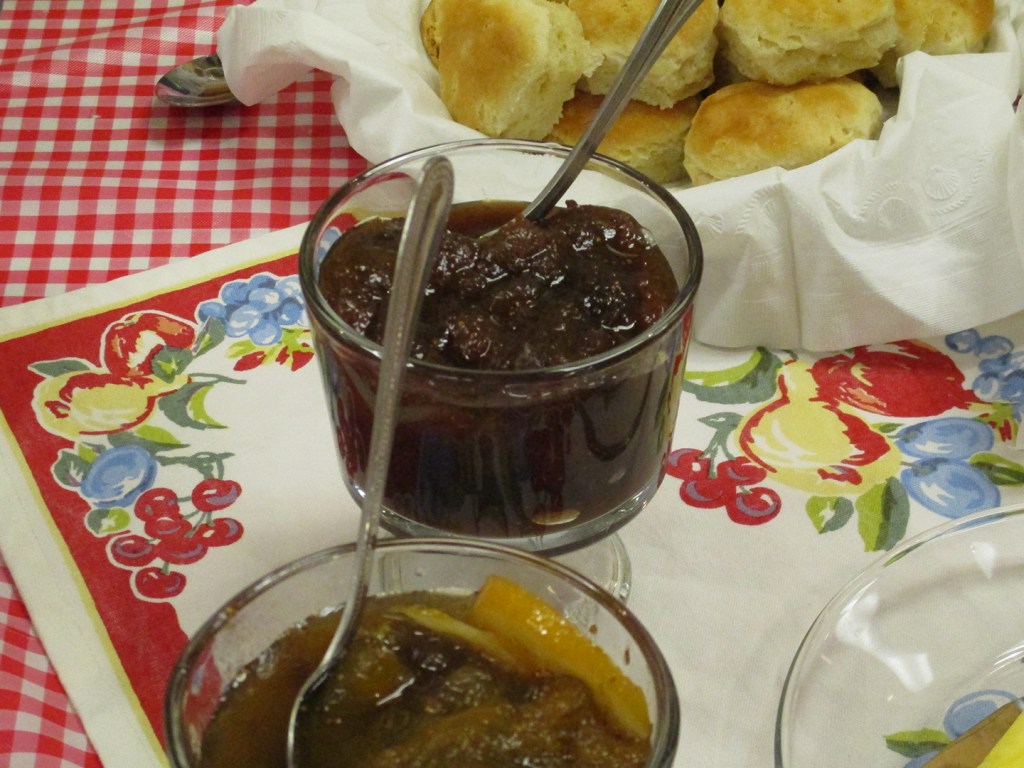 At a recent meeting of the Roanoke Island Garden Club, club members Della Basnight, Betsy Brown, Melva Garrison and Jaye Massecar presented a program about life on Roanoke Island during the 1950s, before the huge development that came in the 1960s and 1970s. The idea for the program and lunch came up when the four women were reminiscing together about life and food on the island when they were children. At the meeting, each presenter donned an apron, as was customary for those working in the kitchen.

Tables were decorated with white camellias in Coca Cola bottles. The bottles were used by early Garden Club members instead of personal vases so no one would know which “specimen” camellia blossom belonged to which member. The white camellias were provided by Frank White Jr., whose father, along with other island men Mose Basnight and Louis Midgette Jr., started the camellia plantings at The Elizabethan Gardens. 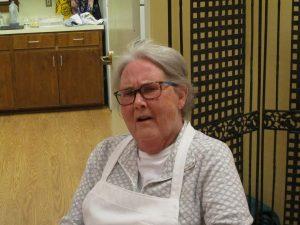 Melva Basnight Garrison talked about how the area waters provided much of their food. Clams were plentiful. No boat was needed, the children could wade into the water to harvest the clams. Melva demonstrated a clam opener her grandfather invented to expedite food preparation. (No, he did not patent the opener.) She also shared the wooden bowl that her grandmother used and the cleaver used to chop the clams. In a huge pot, she shared her family’s Hatteras Style Clam Chowder, which consisted of clams, bacon and potatoes. She noted that one did not scrape the bottom of the pot for the last servings because one might get sand along with the clams. 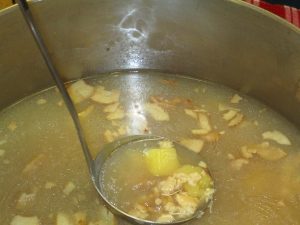 In a large saucepan, fry pork or bacon over medium heat until crisp.

Add clams, water, onion (if used), salt and pepper to pan. Bring to boil. Reduce heat and cook slowly until clams are tender, about 1.5 hours. Add salt as needed to taste. Add potatoes and cook until potatoes are done, about 20 minutes. 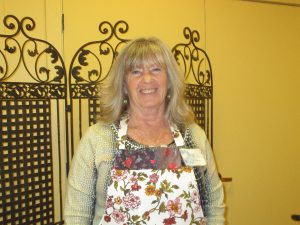 Jaye Massecar talked about being raised in upstate New York, but as a child spending every summer on Roanoke Island with her Grandmother Etheridge and visiting with her Basnight relatives. She remembers helping her grandmother pluck goose feathers to make pillows then cook the goose. She recalled helping her family pull in fish nets and family frying fish. Jaye told a story about her Grandmother Etheridge who rode the school bus to her job at the school cafeteria. The bus driver hit deer two days in a row; both deer were processed and served in the cafeteria the next day! Fresh eggs were plentiful and deviled eggs were a common side dish. 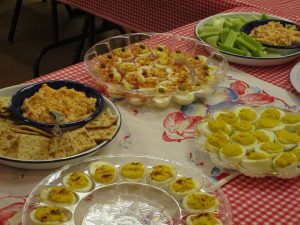 Mix yolk with the following to a creamy consistency:

A taste of yellow mustard

A good spoonful of sweet relish

Salt and pepper to taste 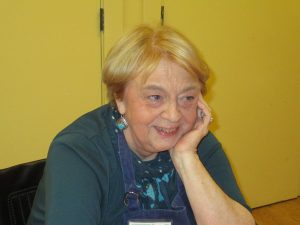 Betsy Etheridge Brown spent many summers on Roanoke Island with her Great-Grandmother Etheridge. Her great-grandparents lived on land which had been part of the what is now Island Farm, as was the land on which Betsy’s home on Etheridge Road was built. She noted that the original 1750s Island Farm was large, but has been divided up among many branches of the family in the 19th and 20th centuries. Food sources and preparation in the 1950s were virtually unchanged from those of the 1850s, the era presented at the restored Island Farm. Farmers ate what they grew or caught: cucumbers, corn, beans, figs, fish, etc. She recalled eating dishes such as succotash, pimento cheese and deviled eggs as a child. Betsy is pleased that some of her property will soon be a farm again. It will be producing organic vegetables and flowers, planted and tended by a local resident, Ladd Bayliss, and her husband Eric Soderholm. 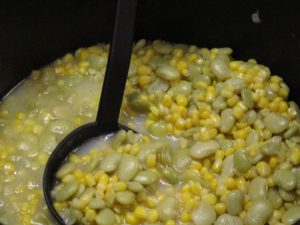 Place equal amounts of fresh or frozen small lima beans and cut corn in a saucepan. Add enough water just to cover the vegetables and bring to a boil, then reduce the heat and let the vegetables simmer. At this point add butter (for a vegetarian dish) or bacon or another meat to flavor the dish. After the beans have softened, add salt and pepper to taste and remove the pan from the heat. You may also add fresh or canned tomatoes to the dish depending on your family’s taste.

Grate eight ounces each of sharp yellow and white cheddar cheese. (Cabot’s Vermont Sharp or Seriously Sharp Cheddar recommended.) Some also add cream cheese for a smoother spread or use another white cheese such as mozzarella.

Add a large jar of chopped pimento with liquid. If only sliced pimentos are available, chop them into small pieces. Add mayonnaise in small amounts and mix until the dish is at the desired consistency. The pimento liquid and mayonnaise usually add enough salt to the dish, but add more if needed. Add pepper to taste (freshly ground and not too fine if possible). Some cooks (not Betsy) add non-traditional seasonings such as chopped jalapenos. 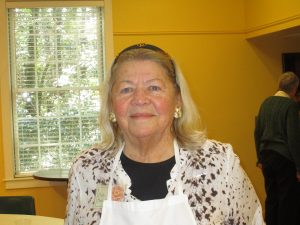 Della Basnight learned much from her Grandmother Basnight and seafood was a major food caught and prepared in her family. Fish was prepared not only by frying, but also baked whole (her Grandmother Basnight loved the eyes) or boiled with potatoes and onions. On a trip to England, she sampled boiled fish with potatoes (what the English call “fish muddle”) which was similar to ours and obviously brought over to this country by the first English settlers (The Lost Colony). Della served fried fish cakes, which consisted of a combination of sheepshead, flounder and rockfish. She also served cucumbers in vinegar, almost always available on Roanoke Island tables. 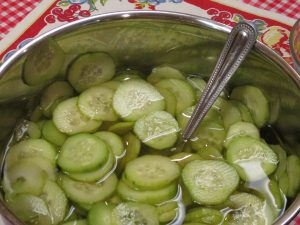 First off, buy the smallest, firmest cucumbers you can find. Use one cuke for every three guests. Peel and slice them as thick as possible. In a glass bowl, start with a healthy splash of apple cider vinegar then add in a couple tablespoons of sugar and salt and pepper to taste. Stir to dissolve, then add cold water to double the volume of the vinegar. Adjust ingredients to taste.

Add the cucumbers and make sure they are covered by the vinegar. Refrigerate two hours or overnight. (If you are in a rush, add ice cubes.) Onions, spring onions or scallions can be added if your folks like them.

“This was my first kitchen duty assigned to me at age eight by LuLu, who cooked for my grandmother. To this day, I can hear LuLu’s voice guiding me.” 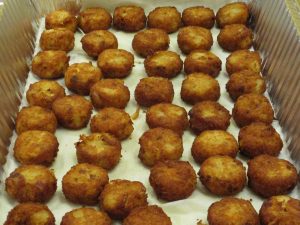 First, boil whatever fish you have available – more than one type makes for more complex flavors. They must be scaled and gutted but bones and skin left on. After 30 minutes of boiling, remove from heat and let cool. Once cool enough to handle, pick out bones and skin, being careful not to break up the fish too much.

Cube and boil an equal amount of peeled potatoes and drain once soft enough to pierce, about 20 minutes. Beat two eggs until a light yellow. Mix the fish and potatoes gently together then salt and pepper to taste.  Add the eggs as a binder and shape a patty of about one cup.

Fry in ¼ inch oil. Crisco or lard were our choices. Butter and olive oil are not good for this dish. Fry for 3-5 minutes then flip and repeat. Fish and potatoes are already cooked, so this mostly to crisp the outside.

For dessert, the club members enjoyed fresh baked biscuits lathered with butter and delicious fig preserves. It was a perfect closing for the island-based menu. 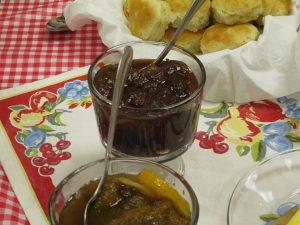 Juice of one lemon

Bring water, sugar and lemon juice to a boil in a large, heavy kettle (enamel or stainless steel) and stir until sugar dissolves. Add figs and lemon slices if used and cook uncovered 15-20 minutes until figs are clear. Remove from heat, cover and let stand overnight at room temperature to “plump up” the figs. Wash and sterilize four half-pint jelly jars, lids and rings in simmering water until needed.

Bring figs and syrup to a boil and skim off any foam. Pack figs into hot jars with syrup, filling to ¼ inch from the top. Wipe jar rims and seal. Process for 30 minutes in a hot water bath (175 degrees F). Remove jars from water and tighten rings if needed. Jars are sealed when the lid “pings” and is slightly depressed. Store on a cool dark place. (Recipe adapted from The Green Thumb Preserving Guide, 1976, by Jean Anderson.)

Serve the preserves on freshly baked biscuits with butter and, if available, fresh cream.

Club members and guests enjoyed the lunch and their trip through history, hearing how early families on Roanoke Island survived on offerings provided by the land and the sea.