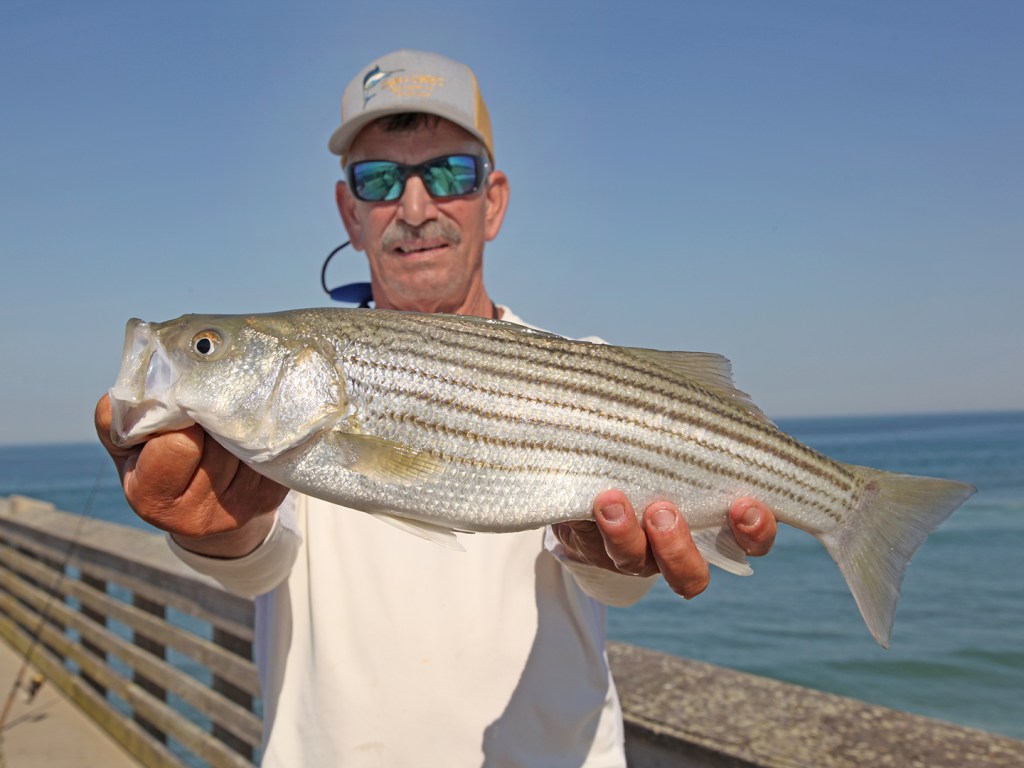 Fishing from Avalon to Hatteras was phenomenal during the past week or so. Bluefish showed up in force everywhere. As the ocean water continues to warm up, there’s also more variety of fish to target and catch. 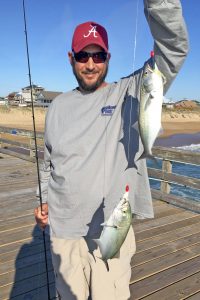 Late in the week on Avalon Pier, anglers were having fun fishing for and catching blues two at a time. The ocean temperature was around 58 or so.

He also said a few speckled trout were taken mid-week when the weather was fabulous.

“We got a few specks on Wednesday,” Byrum added.

Down at Jennette’s Pier it was much of the same. Got-Cha plugs and metal lures were flying left and right. In addition to blues, speckled trout, striped bass and albacore were caught.

Brian Postelle of Manteo managed to reel in a pretty spotted sea trout – also known as speckled trout – right in the middle of a bluefish bonanza. His trout and blues hit the grease that night, he said. 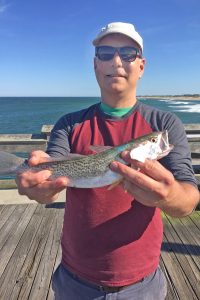 Sammy Thornton of Nags Head released a beautiful striped bass that took a Kastmaster metal lure right along the shoreline. “He saw it and zap, he was on!” Thornton said. He was also having fun jigging for blues.

George Cecil of Manteo reeled in a nice false albacore (aka Fat Albert) on Wednesday. He said he was about to start a two-month time period of working as a mate on an offshore vessel. 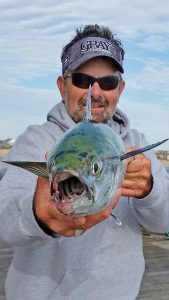 As for offshore fishing, reports from the Oregon Inlet Fishing Center indicate that it’s been great fishing, especially for yellowfin tuna. Mahi is still coming to the docks as well as wahoo.

“They’re been getting their limits on yellowfin, dolphin(fish) and wahoo,” said Denise McNamara. “Nearshore boats are getting blues.” 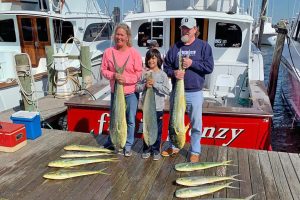 Another happy party of anglers from the sportfishing vessel Fishin Frenzy out of Oregon Inlet Fishing Center. Courtesy photo

She added that the ship’s store has been fully remodeled and set back up for summer.

“It looks great on the inside,” she said. “Everything is redone with new flooring and its newly painted and looks great.”

They’ve got around 30 offshore boats running, nine nearshore and six inshore charter vessels. The Miss Oregon Inlet has started its season, along with the Safari boat that tours Roanoke Sound looking for bottlenose dolphin.

One-day last week, the Miss Oregon Inlet “returned with a good mix of sea mullet, pigfish, pinfish, flounder and a blue crab” according to reports.

Way down south at Hatteras Harbor Marina, Sandy Fletcher said offshore boat captains had reported blackfin tuna, wahoo and yellowfin tuna. They had one billfish, a spearfish, that was released during a trip a while back.

In the sound and inshore, plenty of – you guessed it – bluefish and citation-sized red drum.