Up and down the northern beaches last weekend, fishermen were seeking that elusive fish that makes for great table fare: spotted seatrout. Mostly called speckled trout or simply “specks” around these parts, they seemed to be biting everywhere.

Personally, I haven’t had too many days when I caught this species and those who do hunt them mostly do so early in the morning and late in the day. They travel light to the beach or piers. A rod, lead heads, tackle bag or bucket and a pocket full of Gulp or Zman soft plastics.

So Saturday morning around 6 a.m., I slipped down to Avalon Pier where a handful of guys were giving it a go on the south side. It was super windy that morning and for a minute, I thought maybe I had picked the wrong day to check it all out.

But before long, I watched one of the guys walk from the surf line up the beach a little and at his feet, a bigtime trout was flopping in the sand.

Gorman said he let the whopper “run and run.” 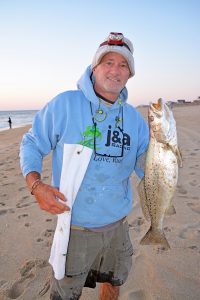 This trout was landed at first light on Saturday by Richard Gorman of Kitty Hawk. Daryl Law photo

He’s just one of many trout fishermen along the Outer Banks who seek these fish daily when in season.

“Everybody said it would be too windy but I came anyway,” he said. He must have gotten there really early because his headlight was still on his knit hat. He had not one but two trout on the beach.

The sunrise was beautiful and stopped to soak it in with my neighbor, Pete, who goes there every morning. What a great way to start the day we agreed. He used to go fishing every chance he got but has slowed down a bit as he’s gotten older.

On the way home, I came across a yard sale and found a brand new Daiwa D-shock combo with line on the reel for $5 cash and made it mine. Next, I was up at T. W.’s Kitty Hawk where Keith Tongier was spooling up a conventional reel for a customer.

When he was finished, I told him about the big one I had seen on the beach and how much I’d like to get one. So I asked him to pick out a good rig and he rifled through the huge bin of “Trout Killers” they sell by the register. These are hand-tied, two lead head rigs for jigging. 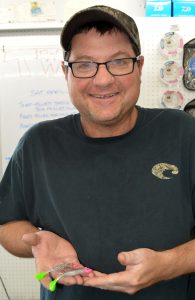 Keith Tongier of TW’s in Kitty Hawk shows off one the Trout Killers he tied, the Salt and Pepper. Daryl Law photo

Keith said he made them all, so I asked him to pull a nice one for me. After going through them looking for the salt and pepper one, I bought it along with the same white Gulp curly tail baits Gorman was using. All total, I spend $16 bucks getting ready to go trout fishing.

Keith also told me the “less hardware the better,” so no swivel; just straight tie to the loop on the rig, he said. He also suggested using a 12 to 24 – inches shot of fluorocarbon line tied with a “double Uni Knot.” 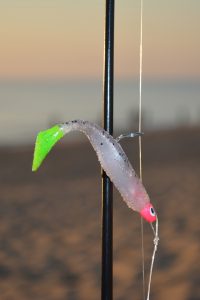 The guy who was still waiting for his reel said to Keith, “Hey don’t tell him everything,” but Keith said he didn’t care. I asked him about the weight of the lead heads.

He said to fish the lightest possible, “so it falls slow.” The one I bought featured a 3/8-ounce lead head with a 1/8 –ounce trailer.

“You have to fish the lightest so it falls slowly,” Keith said. “Pitch it out, pop it. Most are in the trough. Little hops and don’t smash it, just one little hook set will be good.”

“Catch ‘em up!” he said when I left happy with my gear and local knowledge.

At 6 p.m., 12 hours after the sunrise trip, I was back at Avalon photographing my daughter and her group of friends who were headed out for prom that night. The entire pier was busy and the parking lot was full.

I suspected the trout were still biting but I had other more pressing duties including an expected request to jump start the limo so the girls could go to dinner.

Back up on the deck finishing up the photo shoot, I spied a trout fisherman making his way across the lot with three or four nice ones.

I smiled and nodded; he looked pleased. So right then, I made up my mind to return in the morning.

So on Sunday at 6 a.m., conditions were a little different – no wind and dozens of anglers. I counted 30 guys stretched down the south beach and another 20 giving it a go from the pier.

As I walked south down the beach, I found a spot and started casting. I once heard this was the fish of one hundred casts. So I cast over and over. Maybe a thousand?

It was such a beautiful morning. Mascio said “hey” and I think I saw Bert hard on it. Next, Daniel was fishing near me.

“The water is cold isn’t it?” he asked. Yes, it was numbing without boots or waders. Before heading further south, Daniel reported that he had indeed caught some the day before around 6 p.m. He mentioned he saw the black limo.

As I stood there soaking it all in, a few small fish were being caught and released. They have to be 14 inches long to keep with a bag limit of four a day.

An older, veteran trout angler next to me snapped off his rig and turned to leave or re-tie. Daniel later returned and we talked about the big ones from the day before.

As for me, I was skunked on this first round but plan to try again this soon so I can have a little Fishing Fun.