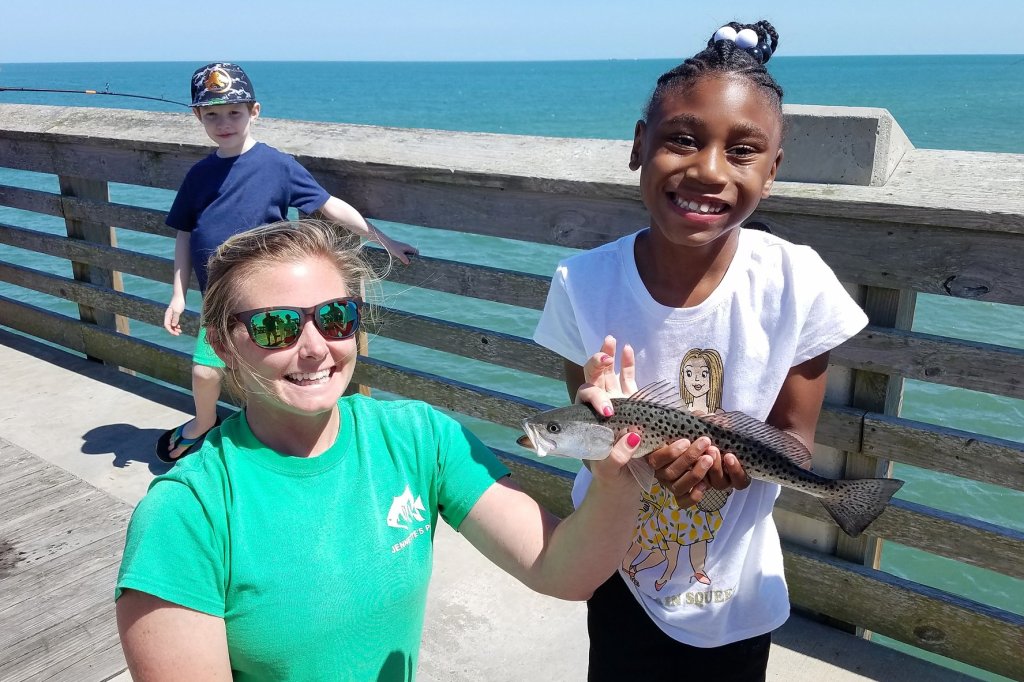 Jennette’s Pier educator Jenna helps Faith with a speckled trout during a fishing program for Belmont Elementary School out of Roanoke Rapids.

From pompano to bull red drum, anglers on Hatteras Island were treated to some fabulous fishing during the past week or so.

With warming water temps and more people out wetting a line, plenty of catches were reported. Bluefish have showed up in mass all along the entire Outer Banks.

In Rodanthe Friday morning, Ryan White said quite a few blues were around there too and added that at Rodanthe Pier, anglers were catching them “every cast, blistering them, I mean blistering them.”

He said drum were starting to show up on the soundside along with a couple of trout but not a bunch. There has also been a few keeper flounder in the surf, White said, but mostly “shorts.”

Sea mullet fishing is also strong on the oceanside with the water temperature in the low to mid 60s.

At the same time Friday, anglers on Avon Pier were also wearing out the bluefish.

“We’re getting loads of blues,” said Kristin Matthews. “It’s been really good and there’s quite a few people out there.” 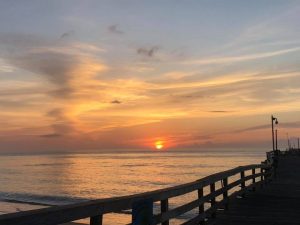 Early morning anglers are treated to this view when they arrive at Avon Pier on Hatteras Island. Courtesy Avon Pier

Live-bait fishermen caught two cobia on opening day, May 1. One was a keeper, the other was a throwback, she said. They’ve also picked a few false albacore.

In Buxton, Kara Eakes gave a super report from the all-new Red Drum Tackle Shop in Buxton, located directly across from the entrance to the Cape Hatteras Lighthouse.

She said her husband Bob has been “waiting all his life for this opportunity and we are looking forward to serving our customers better than ever.” The size of their business increased from 2,000 to 3,800-square foot.

She reported that in the past couple of weeks, folks have caught a lot of big, big drum and that they saw 100 to 200 citation-sized drum a night caught on The Point recently.

Eakes said she also gave a citation for a nice pound and a half sea mullet caught in the surf behind the motels and the angler, a young boy was “over the moon.”

They also saw a citation-sized pompano a few days ago along with 2.5-pound flounder from Hatteras Inlet. Large black drum in the 25 to 28-inch range have also been landed.

This past week, plenty of blues and Spanish mackerel were biting. Four barely legal keeper cobia were landed Thursday and Friday.

On the northern beaches, ocean piers reported plenty of blues along with small and the occasional keeper speckled trout.

A few sea mullet and puffers are biting and Jennette’s Pier reported their first spot and croaker of the year Friday morning. 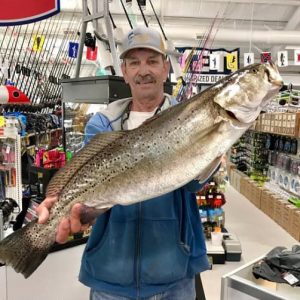