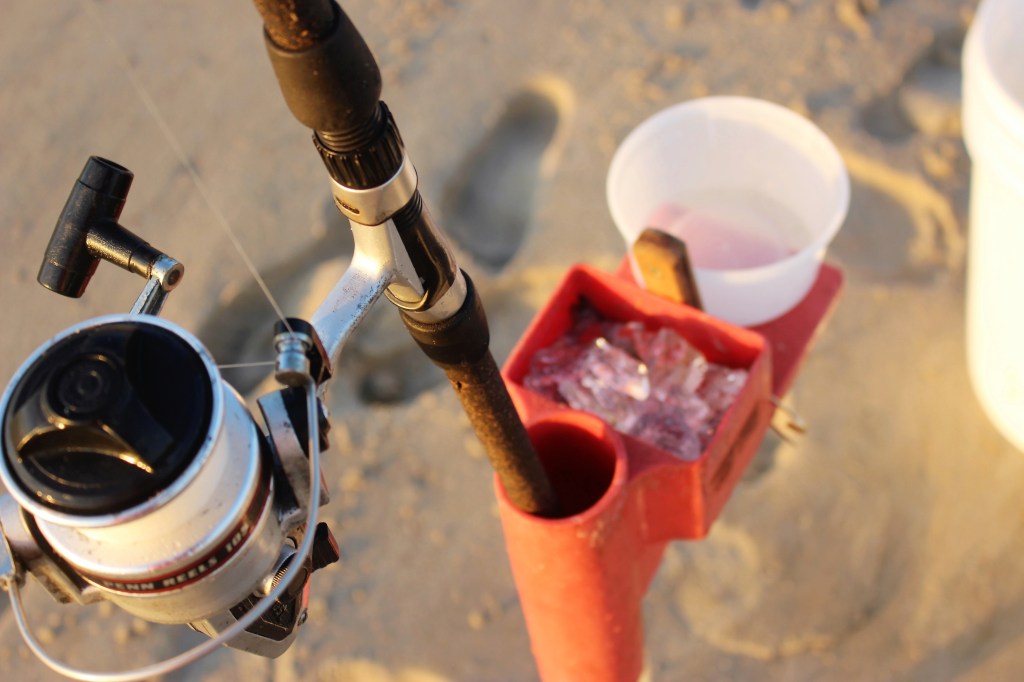 My tried-and-true Penn 105 from T.W.’s has lasted for decades. It’s coupled with a newer, nine-foot long Tica graphite medium action for serious fall fishing. In addition to your rod, a Surf Pal Sand Spike can hold bait with ice, knife and beverage. Daryl Law photo

Smart phones, social media, websites and the internet have drastically changed the world we live in and even fishing has been impacted by it all. News of a good bite spreads lightning fast, as do cell phone camera pictures and videos of catches.

Online daily fishing reports help anglers, too. There’s also no end to the chatter about fishing trips, locations and equipment to use. There are places online to buy everything one may need to go fishing and plenty of fish photos after the trips.

Monday morning, there was an interesting post on a local forum from Mark of Mechanicville, N.Y. asking what equipment he would need to teach his son about surf fishing.

“Ok fellow fishermen/woman, looking for a little information,” he said. “My son and I will be down there in two weeks and he wants to try surf fishing.

“Looking for recommendations on gear and anything else that could help us land something,” Mark said. “Thanks for the help.”

In 24 hours, a total of 20 people had commented. Those who chimed in pretty much all attempted to send the Mark to their own favorite Hatteras Island tackle shops to get rigged-up right. Mark had mentioned he and his son were headed to Waves on Hatteras Island, so this made sense.

Fran and Fran’s in Avon got the most nods, but true to loyal form, local anglers gave solid endorsements for every tackle shop from Duck south to Buxton.

Why do so many people want to try their hand at surf fishing? The answer is simple: there’s nothing quite like reeling in a nice keeper while your feet are planted in the sand.

Mark’s question about equipment is common among those new to the sport. What should I buy and how much should I spend to get started?

In Mark’s case, buying medium-sized spinning reel surf combos makes sense. Yes, these are available at “The Marts,” but those for sale at the tackle shops will probably last longer and perform better.

And according to the 20 comments, the knowledgeable fishermen working in tackle shops will also make sure newbies have the right bait, rigs, line and license required for a little Fishing Fun. 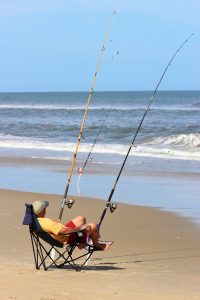 This man displays that surf fishing is good for the mind and soul. Daryl Law photo

Larry out of Salem, W. Va. spelled it out pretty clearly for Mark.

“Stop at any of the bait shops, they will help out,” he said. “Frank and Fran’s helped me out a couple weeks ago.”

First time surf fisherwoman Kristen agreed and also endorsed Frank and Fran’s, but pretty much all of the shops on Hatteras were recommended: Hatteras Jack in Rodanthe, Red Drum in Buxton and Frisco Rod and Gun.

Folks also suggested those on the northern beaches – T.W.’s in Nags Head or Kitty Hawk and Bob’s Bait and Tackle in Duck.

Personally, I’ve always liked Daiwa equipment, but have also enjoyed reels by Mitchell and Penn and rods made by Tica as well as Shakespeare’s legendary Ugly Sticks. It does seem like investing a little more money results in longer-lasting equipment, but maintenance helps too.

I try to spray off my reels when I return from surf fishing trips and sometimes use a soapy rag to wipe down the salt-encrusted rods before spraying them, too.

And there’s no doubt keeping everything inside helps it last longer and keeps the rust down some. Most poles are two-piece jobs and reels seat the same way they have for decades.

For people such as Mark, this is ideal because the rod can be broken down and stored inside your vehicle for the long ride back to New York.

Anglers should hold their rod in the dominant hand and reel with their other hand and it’s a good idea to try this out in the store to see if it feels right. All reels feature handles that can be switched to each side.

The reel hangs under the rod, not on top, which forces you to reel backwards and makes you look silly. For beach fishing, a decent pole holder can keep your new combo from taking a quick saltwater bath when a wave, or perhaps even a fish, knocks it over the second you stop paying attention.

If you do have your pole fall over, wash it off with fresh water as soon as possible. When back at the house or cottage, take the spool off and spritz it out but don’t blast it because sand will get into the guts of the reel. Hit it lightly with WD-40.

After long days of fishing or long periods of time in between trips, it’s a good idea to strip some line off the spool because line often gets nicked while fishing and weakened from exposure to sunlight.

As for Mark and his son, who are coming down soon, they’ve got plenty of information his online request.

“Thanks everyone for all the recommendations,” Mark said. “So looking forward to getting there to fish – good luck everyone!”