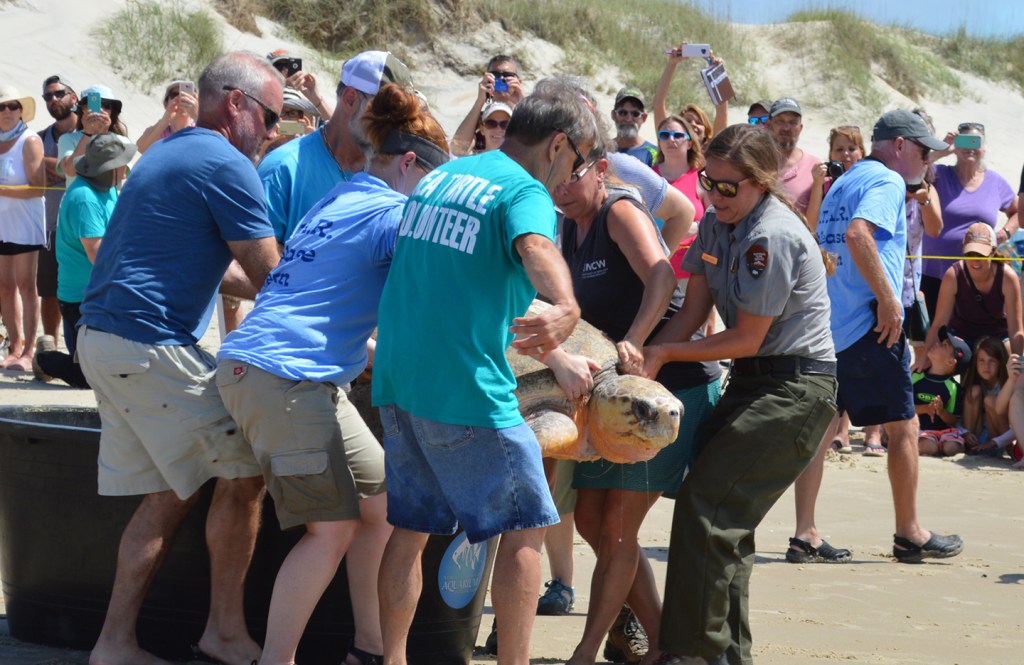 Volunteers lift a 230-pound loggerhead sea turtle from its travelling tub at the Frisco Bathhouse May 4. The sea turtle – named Ada Lovelace – was entangled in an abandoned net in the Atlantic Ocean. The sea turtle was pulled aboard the vessel Stormy Petrel II by Kate Sutherland and Capt. Brian Patteson. Mary Helen Goodloe-Murphy photo

On Saturday, May 4, a sizable crowd gathered to watch the release of two green sea turtles and four loggerheads at the Frisco Bath House.

All but one of the six turtles were rescued from Hatteras Island.

Some 25 to 30 volunteers were involved in transporting, setting up the site, crowd control and the actual release. An estimated 250 people attended the release.

The two small green turtles, weighing 8.5 pounds and 16 pounds, were walked around the crowd rope for all to see and then placed on the wet sand to make a way to the Atlantic Ocean.

The loggerhead turtles were released from smallest to largest, starting at Aragog at 70 pounds, Viktor Krum at 85 pounds, Hagrid, 101 pounds and finally, Ada Lovelace at 230 pounds.

Ada Lovelace was rescued by Capt. Brian Patteson and Kate Sutherland on Oct. 16, 2018. The turtle was entangled in a net three miles from shore. The pair pulled the turtle aboard the Stormy Petrel II and contacted the Network for Endangered Sea Turtles. Ada Lovelace has one fin missing as a result of her entanglement, but she was able to navigate the sand and shore break and disappeared into the ocean to spirited applause.

A bill to name the loggerhead sea turtle the North Carolina state reptile has passed the House and was sent to the Senate, where it is lodged in the Committee on Rules and Operations. The bill number is HB 169.

North Carolina Aquarium on Roanoke Island was the lead organization for the release.

At the release, partner National Park Service was represented by four biological technicians. 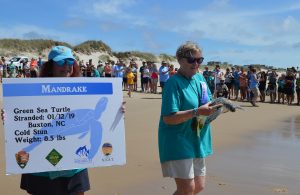 Sea turtle volunteer Bonney Brown presents a green sea turtle named Mandrake to the estimated crowd of 250 people. Mandrake weighed 8.5 pounds and was released along with another green, Beauxbaton, which weighed 16 pounds, into the Atlantic Ocean waters at the Frisco Bath House. Mandrake was found cold stunned on Jan. 12 in Buxton. Beauxbaton was found cold stunned Jan. 15 in Frisco. The sea turtles were rehabilitated in the Sea Turtle Assistance and Rehabilitation Center at the North Carolina Aquarium on Roanoke Island. The release occurred Saturday, May 4. Mary Helen Goodloe-Murphy photo