One on One: The Civil War continues in Fayetteville, Gettysburg and Chapel Hill

Fayetteville is about to have its own civil war about the proposed North Carolina Civil War & Reconstruction History Center planned to be built in that city. The new museum-like facility would be located on the site of the arsenal General Sherman’s troops destroyed in 1865.

Supporters of the project hope the legislature will provide $46 million to launch construction. They explain that the emphasis of the project will not be on the war’s battles, flags, uniforms, monuments and weapons. Rather it will focus on life in the state from about 1835 to the end of the 19th Century.

Others in Fayetteville, including Mayor Mitch Colvin, believe the facility could become a focal point for confrontations between white supremacists and counter-protesters. They worry about what happened in Charlottesville in 2017. Colvin would rather state money be used to deal with pressing community problems.

Fayetteville’s NAACP President Jimmy Buxton told WUNC radio that the facility could attract white supremacists whatever the intent of the organizers. “Even if those who are in charge of this say it’s not, this is what racists are thinking – a Civil War museum. When they get here they may be fooled, but they’re coming anyway because they feel like what they’ve been worshipping all their lives is going to be in this museum.”

Buxton’s remarks were a timely reminder that it is almost impossible to do anything related to the Civil War without opening the door to criticism that the activity is racist or evidence of latent white supremacist attitudes of its promoters.

I thought of these things last week on a three-day trip to Gettysburg with a group of East Chapel Hill Rotarians under the leadership of Civil War expert Fred Kiger. For many of my generation, a trip to Gettysburg is an important pilgrimage, a visit to a shrine, the place where North Carolina soldiers were slaughtered in their effort to drive federal troops from their positions on Cemetery Ridge. Though unsuccessful, those troops advanced to the federal defensive line, leading to the old boast about North Carolina troops that they were “Farthest to the Front at Gettysburg.” 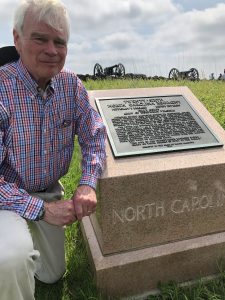 Would it be fair for Buxton to ask me if there is in our veneration of the fallen soldiers a tint of the white supremacy ideology that grounded their cause?

By honoring them, do we also honor and celebrate their cause?

I don’t think so. But the question is a fair one.

Gettysburg is covered with monuments for the heroes of the battle. Most of them honor federal units or the generals who led them. However, on Cemetery Ridge there is a modest monument to the North Carolina troops who advanced to the federal line during Pickett’s charge.

One Rotarian suggested that the toppled Silent Sam monument might find a welcome place at Gettysburg.

Meanwhile, back in Chapel Hill, the chair of UNC’s Board of Governors, Harry Smith, was explaining a change of mind about his earlier insistence that the toppled Silent Sam monument be returned to its place in the center of the campus.

“My original view and opinion,” he explained, “which I think was probably quick and uneducated, was just to put it back up.”

But, he continued, “Having taken the time, energy and effort and talking to a lot of people I have tremendous faith and trust in, it’s my view and opinion as one member that that’s not the right path.”

It would not hurt the rest of us, including me and Buxton, to follow Smith’s lead and spend some “time, energy and effort” talking and listening to others. We might learn to appreciate different viewpoints. And, like Smith, challenge our own ideas.

Ironically, it might be something like the North Carolina Civil War & Reconstruction History Center could bring us together in such an effort.

Gig Line: Memorial Day – What does it mean…