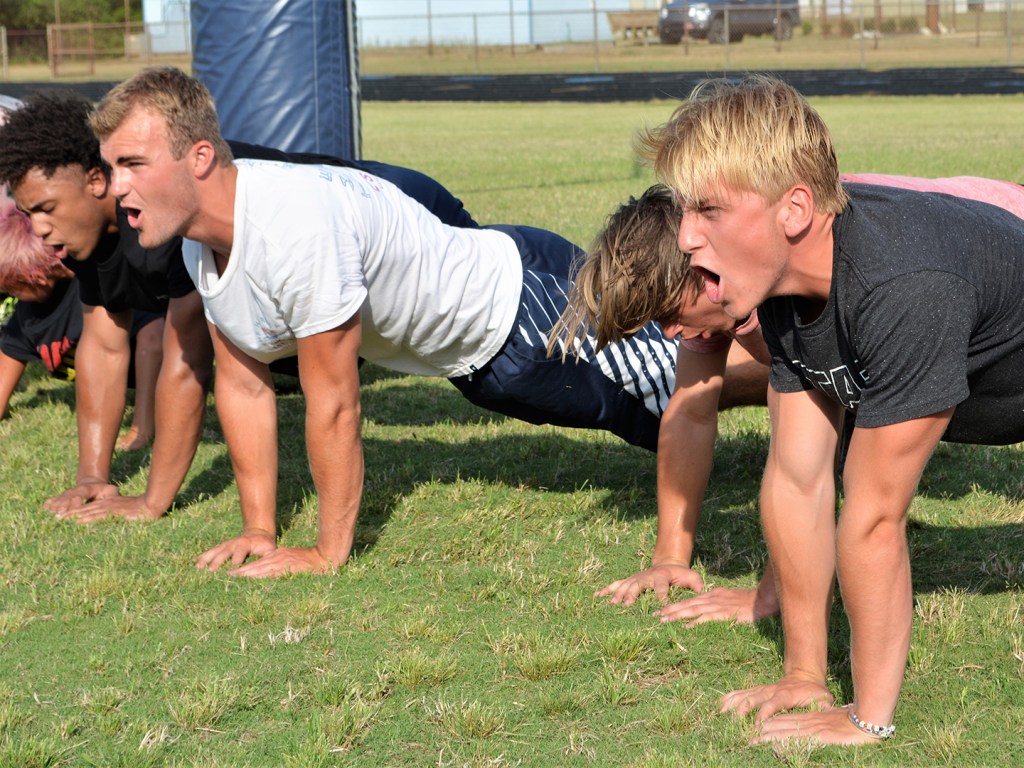 Senior football standouts Parker Sylvia, center, and Shane McKenna, right, power through their final blast of push-ups on the First Flight football field recently.. The pair is graduating at the top of their class on June 14. Daryl Law photo

Hard work and dedication have elevated two young men to the top of their class at First Flight. Seniors Parker Sylvia and Shane McKenna will finish their high school careers as valedictorian and salutatorian, respectively. 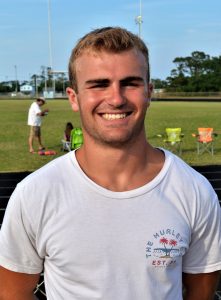 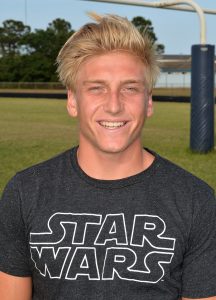 Discipline helped each of the student-athletes achieve goals that culminated in stellar overall grade point averages. Along the way, both excelled in football for coach Jim Prince and Sylvia led the lacrosse team.

At this time, Sylvia plans to attend the Navy Reserve Officer’s Training Corp (NROTC) at the University of North Carolina (UNC)-Chapel Hill, but that could change if he secures a spot in the freshman class at the Naval Academy in Annapolis, Md., he said. McKenna selected the University of California, Los Angeles (UCLA) and astrophysics to study.

During graduation in the Nighthawks football stadium on Friday, June 14, Sylvia will give the commencement address and he said he’ll talk about legacy in front of the 185-plus members of the Class of 2019 along with their parents, friends and relatives.

On a recent Tuesday, the pair was hanging around the football field house with Prince and the team. These guys are the type who shake your hand firmly and look you in the eyes with a grin on their faces.

While there, they joined the members of next year’s team during the squad’s 71st offseason practice, McKenna yelled the loudest as they knocked off a burst of 15 push-ups to end the session . . . “Seven! Eight! Nine! . . .”

Before the team broke from the ensuing huddle, Prince recognized the guys who came to each and every one of the 71 practices, which typically include weight lifting, running and throwing the football around.

That evening, to celebrate the end of these offseason workouts, there were hamburgers sizzling on a grill near the field house.

“It’s our annual picnic,” Prince said. “We try to make it more of close knit group, a close knit place.”

He first tells the guys to let the parents and siblings in attendance eat first as he jokes that the players would eat everything up if they went first. Then, he reflects on Sylvia and his stature as a top scholar. 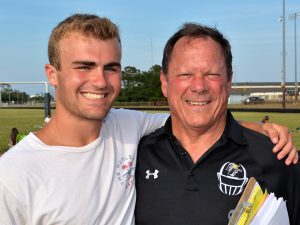 Parker Sylvia and coach Jim Prince hang out after a recent offseason workout. Prince said he was proud of Sylvia for graduating as the valedictorian of the First Flight Class of 2019. Daryl Law photo

“In 47 years [of coaching football], I’ve never seen this, a valedictorian,” Prince said. “How about in basketball?” he asked coach Bill Head, who was standing nearby.

Coach Prince was just as excited and proud of McKenna, “He’s the salutatorian!”

The veteran coach said Sylvia showed up to the offseason workouts the day after lacrosse season ended with a first round playoff loss to Topsail several weeks ago.

“He came right out just to help out,” Prince noted.

Sylvia was a star on both the football and lacrosse teams. He was a solid leader, too and served as captain in each sport. He’s been talking about attending the Naval Academy for years.

But for now, Sylvia’s playing the waiting game, Prince said.  The NROTC track at UNC Chapel Hill, however, awarded him a handsome, full scholarship of $180,000.

As for McKenna, he’s leaving one coast for another.

“He’s a tremendous guy not scared to get out of his comfort zone,” Prince said. “He went to three places on the West Coast; he loved UCLA.”

On the gridiron last season, Sylvia was the “Ace” back, coach said. “He had three strong years of a thousand yards or more and made all-conference two years in a row.

“But the big thing is he’s an amazing young man in an 18 year old’s body,” Prince said. “He’s got all the things you want – he’s loyal, a leader, does the right thing and has no problem doing it.”

“He’s the best I’ve ever had at being the complete man,” coach said. “Every once in a while you have those guys who are so special.”

Prince put Sylvia in the same league with former Nighthawks star Braxton Hughes, who plays football at University of Richmond (Va.), and Marcus Davis, who played for coach Prince at Ocean Lakes in Virginia Beach. Davis completed four successful years as a receiver at Virginia Tech in Blacksburg before moving on to careers in both the NFL and CFL.

Prince also loves McKenna, who matured in more ways than one over the four years of football. He improved his build with hard work.

“McKenna had three years of perfect attendance in the weight room, that’s 90 work outs a year for three years,” the coach said. “And, he kept up his academics.”

The efforts earned him starting position the past two seasons, where he played both defensive end and offensive guard.

As for the move from the East Coast to the West Coast, McKenna explained why he’s headed for UCLA.

“I’ve been to California a few times and just loved the area – the ocean, cliffs, wildlife,” he said. “Why not go all the way across the country? It just really popped for me, just so many people.”

He credited hard work, dedication and discipline as the tools he used to graduate second in his class. McKenna said he learned it all from listening to coach Prince.

“Discipline, ‘get your work done!’” he said Prince would say.

“That discipline leads to freedom,” McKenna explained. “Developing discipline is what coach Prince taught us.”

McKenna paused while Scott Williams of the Fellowship of Christian Athletes said the blessing. He thanked all of the parents and players.

Then Sylvia shared some thoughts about his athletic career, including his last lacrosse season this spring.

“I had a lot of assists, more than I’ve ever had,” he said. Sylvia explained that teams were looking for him after he dominated by scoring goals as an underclassman.

Because defenders were sliding early and putting two or three guys on him, Sylvia learned to dish off to newcomers Nick Gardill and Jack Fitzgerald, said lacrosse coach John Van Lunen. 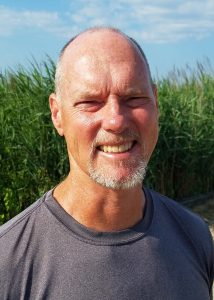 “He learned to see the field better,” the coach said. “Instead of putting his head down and going through two or three players.” Sylvia was one of the best lacrosse players and leaders to come through First Flight’s program, Van Lunen added.

For the record, he played four years of football and lacrosse. And in true Outer Banks style, he also did the shooting team as a freshman and sophomore. He swam one season with fellow lacrosse attackman Sam Fitzgerald their junior year.

A fairly humble standout, Sylva credited his coaches for his successes.

“They helped me more than I did the sports,” he said. “Coach Prince and Van Lunen helped me with scheduling and doing the same thing every day.

“I didn’t hang out with my friends on the weekdays,” Sylvia said, “so I could play sports and it was well worth it.” His efforts were recognized by his coaches and teammates. He was a three year captain in lacrosse and all seniors serve as captains on Prince’s teams.

As for heading to Carolina, Sylvia said this route may just offer the best of both worlds – the routine and discipline of the Navy and time to enjoy the college life. He seemed pretty pumped up about it all.

He’ll ship out for boot camp at the Great Lakes in Illinois for the month of July. Between boot camp and the NROTC at UNC, he’ll get in plenty of training – physical, scuba diving, pistol and rifle, he said.

For now, he’ll continue working out at the YMCA with “little brother” Cole Tomblin and perhaps use a little discipline to fine tune his speech for graduation.